The Future of Higher Education

As president emeritus of the Association of American Universities, long-time chancellor of the University of California, Berkeley, and interim president for the University of Oregon, Dr. Robert Berdahl ‘59, is considered among America’s most vocal advocates for higher education. 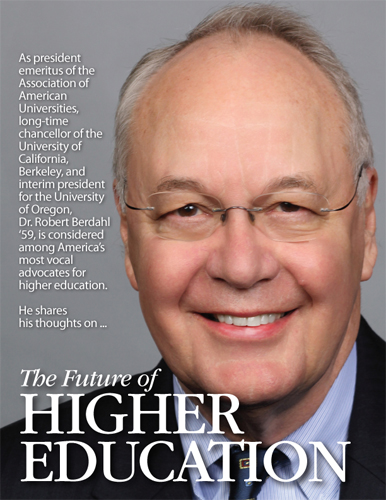 He shares his thoughts on "The Future of Higher Education."

As a kid in the 1950s, he wore blue jeans and sneakers and felt good about growing up in the U.S. – the newly dubbed global superpower.

In post-war America, the 50s were the best of times. The nation was home to the world’s mightiest military; a booming economy; and a newfound prosperity that enabled more families than ever before to purchase homes and cars and partake in “the good life.”

By admission, Dr. Robert Berdahl, class of 1959, counts himself among the members of the “lucky generation,” especially when it comes to education.

“In the 1950s, opportunities were everywhere. We didn’t have to select our careers based on whether or not we’d be able to pay off the debts we’d acquired while we were in college because, quite simply, it wasn’t that huge a burden to acquire an education,” he said.

According to the CollegeBoard, tuition and fees at private, nonprofit four-year colleges averaged roughly $30,000 in 2011 (about $8,500 for public, four-year institutions) – that’s up more than 350 percent over the last 30 years alone.

Over the same period, state funding for higher education has remained relatively flat or, in some cases, has even decreased; while the median household income has seen only modest increases (with the exception of the last four years, during which median incomes have actually declined).

A 40-year veteran of the industry,  Berdahl believes the future of higher education in America is a conundrum of epic proportions.

It’s a puzzle we have to solve, he says, before it’s too late.

A Career in Higher Education

From 1997 to 2004, he served as chancellor of the University of California, Berkeley.

He was named president of the Association of American Universities (AAU), an association of 61 leading public and private research universities in the United States and Canada, in 2006. As AAU president, he led the policy behind the America COMPETES Act — a congressional move to encourage research investment and an improvement in U.S. competitiveness, along with increases in federal support for basic research.

After retiring from the AAU presidency in mid-2011, he was named president emeritus. In December 2011, he was appointed interim president of the University of Oregon.

He discussed “The Future of U.S. Higher Education” at an Augustana Thought Leader Forum in December 2011.

The average U.S. college student graduates today with about $20,000 worth of student debt. Perhaps not back-breaking, Berdahl says, but if a student chooses to go on to graduate school or pursue professional study, that amount mounts.

“We’ve seen a kind of sea change in attitude in this country in recent years about public investment in public goods. We hear a lot about the declining infrastructure of the United States – the bridges that are vulnerable; the deteriorating highways; inner city deterioration – all as a lack of public investment. I think the same is true for the intellectual infrastructure of our country.”

“The prevailing attitude when I was a student in the 1950s and 60s was that the nation invested in higher education because it was a public good – because it was the foundation of a democratic society. It was the public as a whole – the society – that benefited from that investment in education.”

“Today, we have the attitude that those who profit from it – the individual, rather than the public – should be the ones therefore that pay for it. And so, as a consequence of that changing attitude, we’re seeing disinvestment in public universities.”

That change in attitude, Berdahl says, coupled with the rising cost of college and an increasingly unequal distribution of wealth has the potential to produce catastrophic results for future generations.

“The middle class is finding itself with a stagnant median income. The top 1 percent of Americans now earn as much as the bottom 60 percent. From 2002 to 2007, out of every $3 of income gained, $2 of those went to the top 1 percent.”

Berdahl says the income gap undoubtedly gives way to an education gap, which segues to an unemployment gap.

“Among people with only a high school diploma in the U.S., 12.5 percent are unemployed. With a college degree, the unemployment rate falls to 4.5 percent; with an advanced degree, it’s only 2 percent.”

“We’re seeing in the U.S. a flattening out and a reduction in the level of education being achieved. And the middle class is getting squeezed out.”

Berdahl points to the University of California as one example. There, Berdahl says, the number of students coming from middle-class families is down; replaced by students who come from economically disadvantaged families who receive a great deal of financial aid.

With aid, loans and Pell grants, students from families who make up to $60,000 in annual income are able to achieve an education. At the same time, students with a family income above $120,000 can often manage to afford an education. Berdahl says it’s the group in the middle – families that earn between $60,000 and $120,000 – who are being squeezed.

Berdahl says drastic changes are needed in order to improve the outlook for the future.

“I think either states have to reverse their disinvestment in public universities or they must give those public universities more independence. Without this freedom, I think there will be an intolerable decline into mediocrity for our institutions [of higher education].”

With that freedom, Berdahl says higher education institutions would have the power to redistribute income – charging a good deal more to those students who can afford to pay the ‘full freight;’ invest in technology; advance research initiatives; and prepare students for lifelong education.

“To do these things we’ve got to break the political stalemate in this country, which is crippling everything we try to do. The question is, do we still have the political will – the political courage – to continue to push ahead for the next century?”

“We have an unwillingness in this country to sacrifice for the greater good that I find to be dismaying. The bottom line is this: investment in human capital is the means of building a strong economy.”