The Power of One

In the late 1880s, a fearless 23-year-old reporter named Nellie Bly took an undercover assignment from the famed New York World newspaper to write an exposé of the Women’s Lunatic Asylum, hidden away on New York’s Blackwell’s Island. 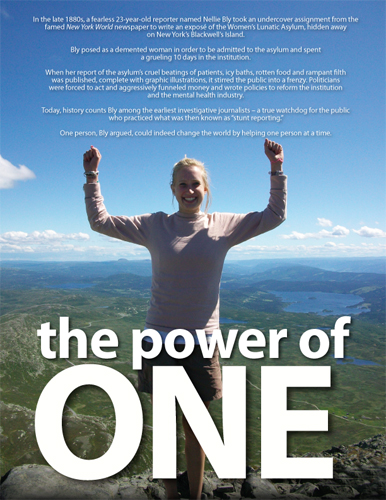 Bly posed as a demented woman in order to be admitted to the asylum and spent a grueling 10 days in the institution.

When her report of the asylum’s cruel beatings of patients, icy baths, rotten food and rampant filth was published, complete with graphic illustrations, it stirred the public into a frenzy. Politicians were forced to act and aggressively funneled money and wrote policies to reform the institution and the mental health industry.

Today, history counts Bly among the earliest investigative journalists – a true watchdog for the public who practiced what was then known as “stunt reporting.”

One person, Bly argued, could indeed change the world by helping one person at a time.

At 22 years old, the education major from Mankato, Minn., has gone undercover at South Dakota’s legendary Sturgis Motorcycle Rally to research the extent of human trafficking in the state; and has student-taught elementary school children in Slovakia and in Moshi, Tanzania.

Her efforts as a student, and her goal of becoming a middle school science teacher, all fall in line with what Miller believes is her true calling.

“I’ve seen the injustice around the world. I’ve seen it here in South Dakota. I can see how I can be a change agent. I can influence change in the classroom. As a teacher, you can empower students to be confident in who they are. You can remind them that they can do something – anything – if they put their minds to it.  They can carry that confidence with them to high school and beyond.”

“I can’t end [all the injustice in the world]. But, I can change the world, one person at a time.”

Miller’s first taste of international travel happened when she was a sophomore. She completed a four-week, independent study while student teaching at a Lutheran school in Martin, Slovakia. She taught English to students in kindergarten through seventh grade, observed classes and assisted with after-school programs. She lived on campus in a dormitory.

“The fact that there was little English spoken in Slovakia was definitely a cultural shock. But – a good one. I felt totally vulnerable; I was reliant on the Slovakian people for everything. I ended up meeting another teacher there who was from Minnesota. She was a great help.”

The following spring, she was selected as one of Augustana’s Peace Prize Forum scholars.

“It was an amazing experience to study at this international school surrounded by people from so many different countries. To hear what they’ve been through and compare it against what I’ve experienced gave me a real global lens.”

For her final project as a Peace Prize Forum scholar, she examined the growing issue of human trafficking in South Dakota.

“South Dakota is among the top six worst states for human trafficking. From Sturgis, to the hunting season, to the Native American Reservations, people are preying on the vulnerable. Men and women are trafficked here to work in hotels, bars and other establishments.”

To gauge the seriousness of the issue, Miller went undercover at the Sturgis Motorcycle Rally for a first-hand account.

“I dressed up like a biker girl and walked up and down the streets to see what was really happening.”

Miller took her own research and paired it with ongoing investigations conducted by Be Free Ministries, a nonprofit organization based in Sioux Falls that is committed to ending human slavery, trafficking and exploitation locally and round the globe.

She presented her findings to the campus community at the Augustana Symposium while Be Free officials presented the evidence to South Dakota lawmakers.

For Miller, the experience illustrated the sheer and lasting power of education.

“South Dakota now has a human trafficking law,” Miller says, smiling, referring to a measure signed by Gov. Dennis Daugaard last March that allows the state to prosecute people for using force, fraud or coercion to make others engage in prostitution or involuntary servitude.

“Education is key. We need to get the word out about what’s going on. That’s the first step. Most people are blind to what’s happening. Education is the foundation of democracy. These people are being trafficked from impoverished countries where there’s no stable government, mass unemployment and other significant problems. Before human trafficking can diminish, we first need to look at a grass roots effort like the one I was involved with to help the vulnerable.”

In January 2011, Miller returned to Slovakia and brought four other Augustana students with her.

“I wanted to expose others to the same educational experience I had,” Miller said. “We left after Christmas and backpacked through Europe. We started in Amsterdam, went to Germany, the Czech Republic, Poland, Austria and finished in Slovakia. From there, we taught through J-Term.”

Currently, she’s teaching fourth and fifth graders at the International School at Moshi in Moshi, Tanzania, located at the base of Mt. Kilimanjaro. She’ll be there through March, when she’ll return to campus and prepare for Commencement in May.

Miller says her experiences as a student have confirmed her conviction to teach and empower students. She’s hoping to find a teaching job in Colorado.

“Anybody can teach; but not everyone can be a great teacher. I really want to empower kids and remind them that they matter. Maybe at night there are other factors but, at school, they’re safe. My job won’t be easy but, my job will be rewarding. For kids in middle school, there’s a lot of vulnerability. Their world is changing every day – I can be a constant in their lives.”