When Kelly Kougl’s father, Don, passed away just before the NCAA National Cross Country Championships, the heartbroken senior had to make a decision. 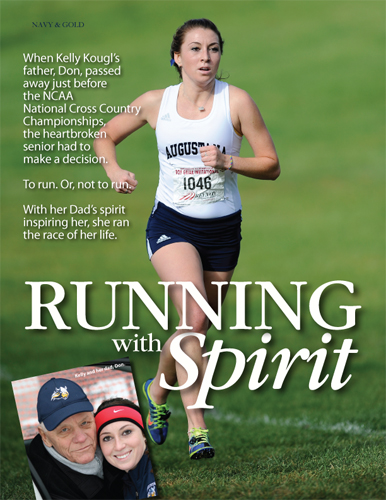 With her Dad’s spirit inspiring her, she ran the race of her life.

Don Kougl was a constant among the crowds of screaming fans and cheering parents who roam the grass along winding cross country courses in the fall and fill the stands at track meets in the spring. His white hair often covered by a baseball cap, Kougl never yelled. Instead, he watched the races in a thoughtful silence, proudly observing his daughter, Kelly, a business administration major, and the other runners round the course. In his hand, he always held a stopwatch.

He was always there.

Afterwards, from his home in Cheyenne, Wyo., he clipped newspaper articles recording the scores of each race and sent them to Kelly at her college mailbox.

So, in November, when her dad passed away at 72 following a grueling 16-month battle with bone cancer just days before Augustana was set to compete in the NCAA Championships in Spokane, Wash., one thought kept coming to mind.

At the race of her lifetime, her dad wouldn’t be there, watching.

As it turned out, Don Kougl was there – in spirit. Odds are he ran alongside Kelly for all 6,000 meters. As she meandered through the course in frigid temperatures, her toes numb, her spikes crunching atop three inches of fresh snow, his last words to her echoed inside Kelly’s head.

They crossed the finish line together – Kelly and her Dad’s spirit – placing 29th in the nation with a time of 22 minutes, 8.40 seconds.

After his diagnosis in July 2010, Don Kougl, a former emergency room physician, tried to remain strong for his family. While doctors predicted he’d have nine to 12 months to live, Kelly remembers that her dad never complained. Whenever someone asked him how he was feeling, he always turned the conversation around to another topic.

“My dad was like a dad to so many people,” Kelly, 21, remembers. “Everyone always came to him with questions – needing advice, needing mentorship. He was willing to talk to anyone. He was so genuine about helping people. He showed us how to get through the pain of losing him just by being himself.”

Following attempts at chemotherapy, Don’s cancer began to advance in mid-2011. At that time, Kelly, along with her dad and her mom, Maureen, began talking with Tracy Hellman, Augustana’s head track and cross country coach, about the “what-ifs.”

“I made a point to go home as often as I could. Toward the end, I went home every other weekend.”

Remembering their close relationship, Kelly says her dad’s goal was to make it to the end of the semester. She says he didn’t spend his last days sharing important life-long lessons or inspiring reflections. Rather, their conversations were filled with talk of current events, the goings-on of college life and expressions of love.

“Everything I needed to learn, he’d already taught me,” Kelly says.

The Saturday before Nationals, Kelly spoke with her dad by phone. It would turn out to be their last conversation.

“At that point, he was confused; he was hard to understand. He said congratulations. He said, ‘I’m so proud of you,’” she remembers.

He died later that day.

Following the news of his death, Kelly’s teammates surrounded her to offer support and to listen.

The next morning, she went for a run with fellow teammate Kyle Blakeslee, her best friend on the team.

With a heavy heart, she questioned what to do next.

Kelly returned to Cheyenne for her dad’s funeral, which was held on the Thursday before Nationals. At that point, she was still undecided as to whether or not she would compete with her team in Washington.

As she weighed the decision, she stayed in touch with her teammates.

“If I’m coming, we better not suck,” she told them.

After talking it over with her mom, Kelly made the decision to meet up with the team in Denver on Thursday evening and travel with them on to Spokane.

Going, she says, proved to be a good distraction.

On Saturday morning, with a fresh coat of snow on the ground, the Augustana runners gathered on the course of the Plantes Ferry Athletic Complex and pinned green ribbons to their jerseys, in honor of Don’s favorite color. With the race about to start, Kelly joined runners from across the nation at the starting line, unsure of what would happen next.

She had no idea she was about to run the race of her life. Her 29th place finish earned her All-America honors and helped secure Augustana’s first-ever national cross country championship and the College’s second-ever national title, following the Augustana softball team’s national crown in 1991.

“I ran out of my mind. I certainly never thought I’d be an All-American. I thought about him throughout the entire race. When I felt tired, I’d hear him say ‘I’m so proud of you.’ I just wanted to make him proud.”

“Kelly’s performance was truly remarkable,” said Hellman. “She was never out of the top 30 the whole race, and really had the mental perserverance to hold her position late in the race when she was starting to fatigue. To place in the top 30 is a legitimate performance from a top runner.”

When it was over, her mom was waiting for her at the finish line.

“I gave her a hug and we both started crying. At that point, all the emotions came out. I had to kind of hide the emotions during the week because it would’ve been too draining. It all came out after I crossed the finish line.”

“To win nationals as a team was huge. We’ve been talking about getting a trophy since I was a freshman. We knew this had to be the year. We were shooting for top three. To win as a team, it was unreal. The best part was I had seven other people to share those amazing feelings with.”

“This year will certainly go down as one of the most special I have ever had in my coaching career,” Hellman said. “This group of young ladies were truly a “Team.” They are not only great runners, but great individuals. We had to overcome so much adversity this year, and to still finish on top makes it even more special.  The feeling I had when I first found out we had won the title is a feeling that I will never forget.  It was a feeling of extreme joy and pride in everyone involved with our program. I thought of all our alumni and everyone who had been at Augie before, and how special this title was for everyone. It was truly a great day to be a Viking!”

Today, Kelly admits she is still working through the emotions of the past few months.

“The reality is two of the most influential things in my life happened in the same week,” she said.

Looking ahead to graduation in May, Kelly is weighing her options. Her dream job, she says, would be in healthcare administration with an emphasis on marketing. Graduate school is also under consideration.

Whatever the future holds, she says, running will always be a part of her life, as will the memories of her final cross country race.

“You get to know your teammates really well by running together each day. My teammates were there with me since day one of the diagnosis. They all know my parents. As we ran that race, they were experiencing some of the same feelings I was. So, to experience a national win together – well, that was really special.”