The new inductees of the 2012 Class of the Augustana Athletic Hall of Fame were honored on Friday, Oct. 5, during Viking Days 2012. 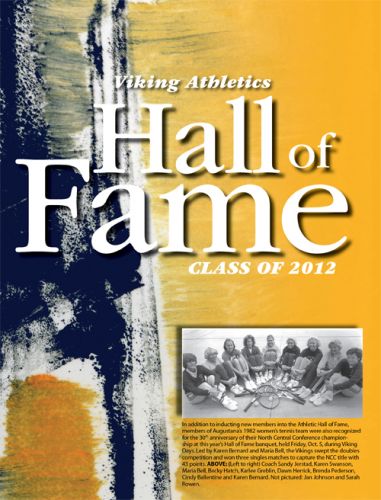 A native of Kimball, S.D., Pulse excelled in football and wrestling at Augustana, achieving All-America status as a somewhat undersized heavyweight on the mat, and becoming a school record holder on the gridiron.

During the 1992 season he was named the North Central Conference defensive player of the week after recording a dozen tackles, two quarterback sacks, and a fumble recovery in a 20-7 win over the University of North Dakota.

Augustana did not win a game in 1991, but Pulse played a role in a resurgent 1992 campaign that saw the Vikings go 8-3 and finish third in the NCC.  He was credited with 54 tackles, including a team-leading 10 for loss, and earned honorable mention on the all-conference team.

In 1993, Pulse logged 44 tackles in a 4-7 season and tied the individual game record with three sacks against North Dakota State University. That season he served as a team captain. He was named to the Academic All-NCC football team and was a second team all-conference choice.

On the mat, he compiled a 70-39 career record. From 1992-1994, he became a three-time All-America with fourth, second, and third place finishes at the national tournament. Following the 1992 season, he was named the Vikings’ most valuable wrestler.

In 1985, he placed fifth at the National Indoor Pentathlon Championships. He went on to set the American record for the fastest single run in US bobsled history and was the national bobsled two-man champion in 1987. A volunteer fireman for four years, he won five gold medals at the 1996 World Fire Fighter Games. At age 50, he completed an Ironman Triathlon.

Away from sports, Wolf writes a column for the Herald Journal called “Insider Financial.” He teaches an insurance ethics course at Kaplan Professional Schools and is the author of “Please Pass the Memories.”

As the undisputed leader of the 1997-98 women’s basketball team, Yager started all 27 games and led the team in scoring (16.6) and rebounding (9.7). She shot 53 percent from the field and 74 percent from the free-throw line. She was named to the Daktronics Division II All-Region second team.

She never experienced a losing season with the Vikings.

Paladino-Hazlett became Sioux Falls Lincoln’s head volleyball coach at age 21. During her tenure, she took the Patriots to 12 consecutive state tournament appearances. Her teams won three state championships and were runners-up twice. Her won-loss record with the Patriots is 277-145.

She was a driving force in switching the South Dakota volleyball season from summer to fall, putting the state on equal footing with programs throughout the nation.

Today, she is the supervisor of specialized programs for the Sioux Falls School District.

In 1972, McCarron was a member of the University of Minnesota’s Big Ten Conference championship men’s basketball team. He then transferred to Augustana, where he played for Mel Klein in 1973-74 and 1974-75. He helped the Vikings to a 36-18 record in two seasons, including a 19-5 showing in North Central Conference play. The 1974-75 team was the NCC runner-up and four of the players are in the Augustana Athletic Hall of Fame.

Since starting Pacesetter, McCarron has helped provide over 3,500 programs for more than 250,000 young athletes. He has also been the publisher of Minnesota Basketball News since 1994.

He compiled a 219-57-1 record In 28 seasons at Bethany. His teams won or shared 16 Kansas Collegiate Athletic Conference (KCAC) titles, and he was named conference coach of the year 11 times. The Swedes were ranked in the final NAIA top 25 poll 20 times and made 13 NAIA playoff appearances during his tenure.

Lee ’68 and Karen ‘67 Larsen began their association with Augustana as students. Lee played football and Karen played in the band.

The Larsens have been Athletic Club/Booster Club members since 1978. They have generously supported the annual Athletic Club Auction as contributors and volunteers, and Lee serves on the Athletic Club board of directors.