October 6, 2018.  The Augustana University Physics Department is the recipient of three major grants from the National Science Foundation. The grants, totaling $294,000, will provide opportunities for AU undergraduates to engage in cutting edge physics research on campus, and at labs around the world, over the next several summers.

The STEM (science, technology, engineering and mathematics) composite major is an interdisciplinary program in the natural sciences which may be declared as a second major in conjunction with another course of study. Pairing a strong background in math and/or science with a degree in journalism, business or secondary education, for example, will strengthen the resumes of future graduates.

May 2, 2017.  Senior Emily Kaufman received the "Outstanding Student" award from the Brookhaven National Laboratory for her work during a six-week Summer School in Nuclear and Radiochemistry. 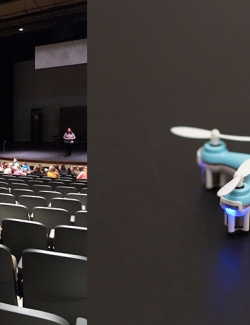 February 19, 2015.  International research on dark matter conducted at Italy's Gran Sasso National Laboratory and featuring work by Dr. Drew Alton, chair and associate professor of physics at Augustana, is detailed in a new article by the Wall Street Journal.

December 5, 2013.  Research by Augustana physics students and their international collaborators is published in Nature Communications.

Tuesday, April 16, 2013. Fermilab Today, an online publication by the Fermi National Accelerator Laboratory (Fermilab), the only U.S. laboratory dedicated to high-energy physics, recently featured Augustana among the worldwide universities it collaborates with.

TUESDAY, APRIL 3, 2012.  Physics and religion major Erika Zetterlund, a junior from St. Cloud, MN was awarded a Goldwater Scholarship for academic year 2012-13.  Zetterlund's research work has been done in collaboration with Dr. Drew Alton and has involved experimental searches for Dark Matter.

TUESDAY, DECEMBER 6, 2011.  Augustana's Society of Physics Students (SPS) chapter has been named one of the Midwest's Outstanding SPS Chapters for its efforts to "spread the joy of science" to local high school students, the campus community and the general public.

MONDAY,JUNE 27, 2011.   This summer, 92 Augustana students are working alongside faculty members and mentors throughout the U.S., exploring and researching everything from platelet-biogenesis to the impact of ultrafast laser pulses on molecular fragmentation – an increase of 54 percent from last year.

THURSDAY, JUNE 23, 2011.   Alumna Kelsie Betsch, class of 2005, will speak about her award-winning Ph.D. research at 1:30 p.m. in the Gilbert Science Center. Betsch, who recently graduated from the University of Virginia, has studied the control of molecular dynamics using ultrafast laser pulses.

MONDAY, JUNE 20, 2011.   The summer issue of The Augustana, the magazine for alumni and friends of the College, features recent graduate Bethany Jochim and her impressive undergraduate career.

TUESDAY, MAY 10, 2011. Twelve students were recently inducted into Augustana’s inaugural class of Sigma Pi Sigma, the national Physics Honor Society, an organization developed to honor outstanding scholarship in physics, celebrate service and the encouragement of exploration and discovery and, provide fellowship.

FRIDAY, NOVEMBER 12, 2010. Thomas Alexander, a senior communications and physics major from Belview, Minn., was honored with the Augustana Covenant Award for Liberal Arts. The award was presented at the 2010 Boe Forum on Public Affairs, featuring former U.S. Secretary of State Madeleine Albright.

WEDNESDAY, DECEMBER 9, 2009.   Augustana students Russ Averin, Neal Gregerson, and Bethany Jochim are co-authors of a paper published in the January 14, 2010, issue of the Journal of Physics B: Atomic, Molecular, and Optical Physics.

WEDNESDAY, DECEMBER 2, 2009. Four current Augustana students join two alums as co-authors of a paper published in the December 2009 issue of Physical Review A, a section of the Physical Review journal dedicated to atomic, molecular, and optical physics research.

MONDAY, JULY 27, 2009.  Augustana junior Bethany Jochim from Pierre, SD, has been named a Rossing Physics Scholar for 2009-2010. Jochim will receive a $10,000 scholarship from the Thomas D. Rossing Fund for Physics Education Endowment within the ELCA Foundation.

THURSDAY, JULY 9, 2009. Nora Johnson, a 2005 Augustana graduate and currently a graduate student in physics at Kansas State University, has been awarded a 2009 Fulbright Scholarship to study at the Max Planck Institute for Quantum Optics in Garching, Germany.

TUESDAY, JULY 7, 2009.  Four Augustana students have been selected to receive sophomore honors. Sophomore Honors recognizes students who have demonstrated outstanding achievement at an early stage of their college career.

WEDNESDAY, MAY 6, 2009.  On May 21, research work completed by current and former Augustana students will be delivered at an invited talk at the American Physical Society (APS) Division of Atomic, Molecular, and Optical Physics (DAMOP) meeting in Charlottesville, VA.

FRIDAY, APRIL 24, 2009. Bethany Jochim, a sophomore physics major from Pierre, SD, is the lead author of an article published in the Journal of Physics B: Atomic, Molecular, and Optical Physics, published by the Institute of Physics.

FRIDAY, APRIL 3, 2009. Augustana students Nick Bleeker and Bethany Jochim have been awarded the prestigious Goldwater Scholarships for the 2009-2010 academic year.

THURSDAY, FEBRUARY 19, 2009. Augustana junior Russ Averin and faculty mentor Dr. Drew Alton's work from the past two summers has now been published in the most recent Physics Letters B journal by Elsevier Science.

Previous news items are available in the department news archive.