GET OUT! - When the alarm sounds

There is something to learn in every bad situation.  In this case, it started with the fire alarm in the Elmen Center, the Athletic/Recreational facility on campus, sounding.  The sounding of the alarm initiated the evacuation process the Rec Services Staff had trained for.  But this time it was real.  An off-duty Rec Services staff member had been in the pool when smoke could be smelled coming from the men's locker room.  The student staff member entered the locker room to investigate the smell and was immediately confronted with thick black smoke and flames shooting from the location of the sauna.  Just a week prior, the entire Rec Services staff participated in the annual emergency procedures training which included a fire safety segment and fire extinguisher training.  The staff member activated the fire alarm using a pull station and ran to the main desk to warn the staff of the fire.  A student staff member and a member of the maintenance staff each grabbed a fire extinguisher and entered the men's locker room in an attempt to put out the fire.  Both extinguishers were emptied, but the fire was to big.  The Rec Services staff calmly evacuated the entire building and ensured everyone was out of the building.

Security cameras in the Elmen Center recorded how thick smoke filled hallways in a matter of minutes.

Once the fire was out and the smoke cleared, the following investigation found that an item had been placed on the heating unit in the sauna causing it to start the fire.  The fire was confined to the only wood structure in the men's locker room, the 8 foot by 8 foot sauna.  While the actual fire was limited to a small area of the building, final cost estimates exceeded $500,000.

Because of the quick calm response of the Rec Services Staff no one was injured.

The video footage captured by the security surveillance system in the Elmen Center is a good reminder why it is so important to evacuate a building quickly once the alarm has sounded.  The camera footage shows that once the hallway located just outside the men's locker room began to fill with smoke it took less than 1 1/2 minutes for the hallway to fill to capacity making it impossible to navigate the hallway safely.  The video is now used as a training tool to demonstrate the importance of acting quickly when the alarm sounds. 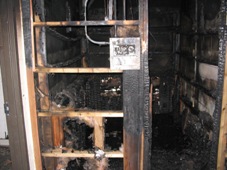 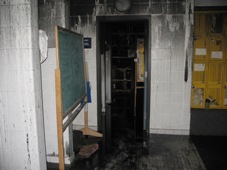