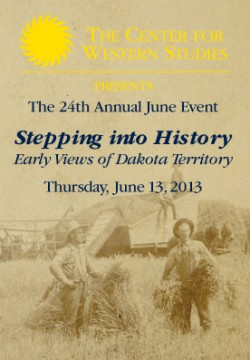 The Center for Western Studies will host its 24th annual June Event, “Stepping into History: Early Views of Dakota Territory,” featuring dinner, entertainment and the premiere of the "Dakota Territory Plans and Mountains (1866-1889): Images from the Robert Kolbe Collection." Proceeds from the event will benefit the redesign and expansion of the Center's museum exhibits.

The June Event is the Center’s annual fundraiser and will be held in the Center's Madsen/Nelson/Elmen Galleries. Guests will be treated to a gourmet meal and music, featuring Ana Olivier at the piano. The evening begins with a reception at 6 p.m., followed by dinner and a presentation by Robert E. Kolbe. The event is sold out.

Former Minnehaha County Commissioner Robert Kolbe is known as the one to call if your antique clock needs repair or if you find an old bottle in your backyard. He is also an expert on early photography in Dakota Territory, co-author of "They Captured the Moment: Dakota Photographers, 1853-1920," editor of "Minnehaha County Historical & Biographical Sketches," and an appraiser of historical books, documents, and photos.

Kolbe is currently conducting research for a new book on stereographic views of the Black Hills Gold Rush, 1875-1879, and planning a second edition of "They Captured the Moment."

Founded by Augustana College Professor of English and Writer-in-Residence Herbert Krause, the Center for Western Studies (CWS) preserves and interprets the history and cultures of the Northern Plains.

The Center began in 1970 as a library and archives and has expanded to promote understanding of the region through exhibits, publications, internships, teaching and such public events as the Dakota Conference on History and Literature (held in April), the Artists of the Plains Art Show and Sale (held in February), and the Boe Forum on Public Affairs.

The event is sponsored by Gerry Berger Law, a member of the Center for Western Studies' Board of Directors.

The event is sold out. For more information about the event, please mail the reply card, call the CWS at 605.274.4007, email cws@augie.edu or visit the website at www.augie.edu/cws.