Alumnus is Noted Expert on Terrorism

As a senior consultant to the U.S. government, alumnus Dr. Jarret Brachman is a noted expert on terrorism. 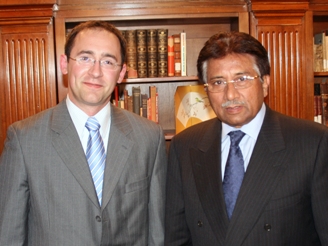 In 2006, Dr. Brachman received The Horizon Award from Augustana presented to young alumni who have quickly demonstrated outstanding vocational achievement. His book, “Global Jihadism: Theory and Practice,” was released in May 2008, by Rutledge Press. In 2008, he participated in the Augustana Thought Leader Forum on Islam and the West, and in October 2009 met at Augustana with Pervez Musharraf, former President of Pakistan who was the speaker for The Boe Forum on Public Affairs.