Augustana College today announced a 250 percent increase in the number of students enrolled in its anthropology major. In 2009, the second year anthropology was offered as an academic major, six students declared it as their area of concentration. This fall, Augustana’s student roster will list 21 anthropology majors.

Morgan Tucker is one example. A senior from Rapid City, Tucker came to Augustana when anthropology was offered only as a minor. She joined the major in 2008 and spent her last two semesters studying abroad in conjunction with Augustana’s exchange program with the University of Exeter in England. Tucker said she choose anthropology because the study combines her love of history with technical skills she can use in the real world.

“Anthropology is defined as the study of human beings. It is history. This allows me to actually get to get down into the dirt and live in history,” Tucker said. “I get to uncover the past to learn about the future.”

So, the obvious question – is there a job market for anthropology majors?

“Many anthropology majors go on to become professional anthropologists or archeologists and work either as independent consultants or for engineering or construction firms. Prior to destruction or digging, archeologists and anthropologists are consulted to assess the potential archeological impact of development projects,” he said. “Anthropology students are trained to discover evidence, analyze it and come to their own conclusions – ultimately those are incredibly valuable skills that can be applied to any field in any industry.”

Studying in the U.S. and Abroad
Augustana is one of a few colleges nationwide to specialize in the study of “Plains pre-history” and is one a few institutions in North America to offer undergraduate students field study opportunities – on-the-ground, in-the-dirt research initiatives to uncover and research pre-historic artifacts. 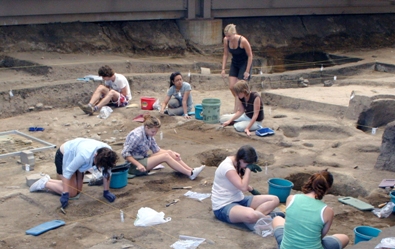 Augustana anthropology majors spend three years on campus and one year abroad at the University of Exeter, an internationally recognized university that was ranked No. 1 in the United Kingdom for archeology in a 2007 National Student Survey.

“The chance to study at the University of Exeter was invaluable,” said Tucker. “I took pre-history, zooarcheology, lithics (stone tools) and osteo-archeology (the study of human burials) – all of which are archeology-focused classes to help me figure out what area of archeology I want to focus on. It really opened my eyes to all the opportunities. Plus, the chance to travel abroad gave me the chance to experience another culture, which was great. All the professors there each come from a different background and offer a different perspective and expertise – they are some of the best in the world.”

Through the Augustana-Exeter exchange program, the University of Exeter sends about 20 students from its archeology program to Augustana’s South Dakota field school each summer. Along with Augustana students, University of Exeter students spend about four weeks excavating and researching at the Thomsen Center Archeodome, an indoor research and teaching facility located on the site of the Mitchell Prehistoric Indian Village.

Students from Augustana and the University of Exeter in England excavate artifacts at the Thomsen Center Archeodome in Mitchell, S.D.