Ole the Viking Statue to be Re-Dedicated Friday

The important contribution of alumnus Peter Eide '66, creator of the Ole the Viking statue that has kept watch over the Augustana campus since 1967, will be recognized at a re-dedication ceremony at 10:20 a.m. on Friday, Oct. 14, as part of the 2011 Viking Days. A plaque commemorating the statue will be unveiled during this event.

The program will include:

Eide's design was chosen from seven entries in a 1966 competition and first dedicated during Viking Days 1967. In a Letter to the Editor of the Mirror on Oct. 20, 1966, Eide explained his inspiration for the statue as follows:

"I believe that it is of prime importance that any Ole statue constructed on the Augustana campus reflect the traditions that the mythical Viking has come to personify. I do not feel that we can justify representing him as a serious, awe-inspiring hero. ... We do not worship an Ole, he merely symbolizes the fight, drive and power of our school spirit and athletic teams. ... It must serve as a rallying point for student activities and as a stimulant for school spirit." 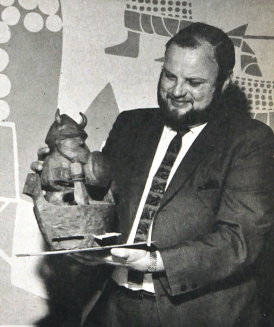