At a memorial service on Wednesday, Dr. Daniel Swets, associate professor and chair of computer science and mathematics, was remembered as a talented scientist and revered teacher who cared deeply about his students, his colleagues and, most of all, his family.

He was the kind of guy who judiciously brought orange juice, donut holes and bananas to every test he gave; a quiet guy who didn’t seek recognition for the countless grants he secured; or, for the complex scientific endeavors and research he managed with students at his side.

Dan Swets, his colleagues and friends said, was a professor who was much more than a scholar – he was a teacher who took the time to listen and provide counsel to his students and was committed to helping young people discover the wonder of science.

As president of the South Dakota Robotics Association and a partner at the South Dakota FIRST LEGO League, Swets played a key role in developing the FIRST LEGO League competition in Sioux Falls, part of a larger program called For Inspiration and Recognition of Science and Technology (FIRST). The competition allows middle school students (ages 9-14) to design, build, and program an autonomous robot to earn points for accomplishing prescribed missions on a 4x8 playing field. They also give presentations on research projects where they have tackled a problem and proposed a novel solution.

Funeral Services
11 a.m. on Friday, Dec. 16, at Our Savior’s Lutheran Church with burial to follow at Woodlawn Cemetery.

Visitation will be held from Noon to 8 p.m. on Thursday, Dec. 15, with the family present from 6-8 p.m. at Heritage Funeral Home.

Participants must work as a team and be able to articulate what they did and how they accomplished it. The national organization calls it “Sport for the mind.”

Swets agreed with that description.

“The basic premise is that if what our culture values and emulates is movie stars and sports heroes, why can’t we make science just as cool? That’s our basic philosophy. We encourage kids to explore science and engineering through fun, hands-on learning that’s driven by competition. It gives kids something to work for, and the tournaments make them feel like rock stars,” he said earlier this year. 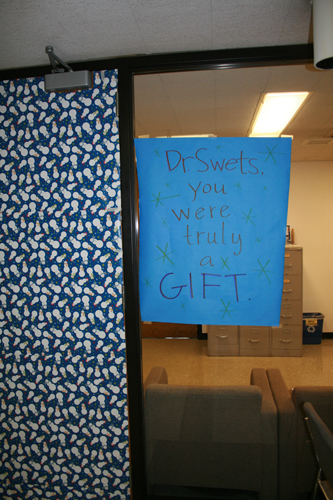 Swets was killed in a plane crash Friday, Dec. 9, near the Sioux Falls Regional Airport. He was 47. Kevin Anderson, Augustana class of 1987; Joshua Lambrecht; and Brian Blake were among the other victims.

Funeral services will begin at 11 a.m. on Friday, Dec. 16, at at Our Savior’s Lutheran Church with burial to follow at Woodlawn Cemetery. Visitation will be held from Noon to 8 p.m. on Thursday, Dec. 15, with the family present from 6-8 p.m. at Heritage Funeral Home.

Prior to yesterday's service at the Chapel of Reconciliation, students, friends and colleagues hung tributes near Swets' office inside GSC and shared memories of him via Augustana’s Facebook page and by email:

I first heard of the accident while on a double date last Friday night at Grille 26. Since then the second to last line of George MacDonald’s book, Phantastes, has been steadily repeating in my head. It has continually brought me comfort, and I’d like to share it with you:

"Yet I know that good is coming to me – that good is always coming; though few have at all times the simplicity and the courage to believe it."

I find this line fitting, because as I look back on Dr. Swet’s life, I see not only all of the good that he has done, but the countless seeds that he has planted and the good that will be coming from those seeds. This speech is not so much about the overwhelming impact that Dr. Swets made when he was alive, but rather it is about the much greater impact that he will continue to make through us: his students, both middle-schoolers and Vikings; his colleagues and his friends; and most importantly his family.

There is an article on Keloland about the South Dakota Lego robotics league continuing with events as planned last Saturday. I know that this is exactly what Dr. Swets would want. Dr. Swets strived to make us innovators, those who would use technology to change the world. Every class was filled with a life lesson and a fantastic story, such as how the software went buggy while the space shuttle was in orbit and they wrote a patch for it in 30 minutes. “And that’s why you always clean up the cache after you’re done using it,” he would say.

Circuits and algorithms were only a fraction of what he imparted to his students. He was a genuinely loving and caring man, and he brought those qualities out in those around him as well. I made some of my closest friendships while in his Computer Organization class. Even though I had taken multiple classes with these individuals before, it was not until his class that we bonded over circuits and really bad-tasting coffee.

The Lego robotic league in many ways characterizes Dr. Swet’s personal philosophy of not just using what we have been gifted with for our own success, but investing our gifts in something that will make a difference. I remember talking to him about career choices, and he said to me, “Jared you have a gift. Now you could use that gift to do what is comfortable, and you’d probably do well at it. Or you go down a path that nobody has walked down before, and then others could follow you.”

When I think of what Dr. Swets has done I know that good is coming – that good is always coming; though few have at all times the simplicity and the courage to believe it.

Fellow students, faculty, and staff, family and friends, I ask that in memory of Dr. Swets we make a difference, that’s what he would want.

Dr. Swets was born Sept. 1, 1964, in Chicago Ill., to Kenneth and Rosemary (Engbers) Swets. He grew up and attended school in Holland, Michigan, graduating from Holland Christian School in 1982.

He received his bachelor’s degree in com­puter science from Calvin College, Grand Rapids, Mich., in 1986. He received the M.S. and Ph.D. degrees in computer sci­ence from Michigan State University, East Lansing, Mich., in 1991 and 1996, respectively.

Since 1983, he had been a computer consul­tant to the small business community. From 1986-1987, he was employed as a software engineer at Rockwell International, Downey, Calif., on the Space Shuttle Orbiter Backup Flight System. From 1987-1992, he was an aerospace soft­ware engineer at Smiths Industries, Grand Rapids, working on embedded software for flight systems and ground station soft­ware. From 1990-1991, he was an instructor at the Grand Rapids Community College and at Grand Valley State University, Allendale, Mich. He was an Ameritech Fellow at Michigan State University, East Lansing, from 1994-1995, while pursuing his Ph.D. degree.

His graduate research encompassed facial rec­ognition software, insti­gating a new approach to image processing, a project that eventually led to a real-time face recognition program in use after the attacks on 9/11. Throughout his career, Dan worked on a variety of projects. His most notable successes were his work with the defense depart­ment and NASA, working on the guidance system of Marine One as well as the braking system of the Space Shuttle Orbiter.

He served as the as­sociate director for the NASA South Dakota Space Grant Consortium and was chair of the NASA EPSCoR Steering Committee in South Dakota.

At Augustana, where he was a computer science professor for 16 years, Swets taught the hardware sequence for computer science majors and was responsible for many of the upper-level electives in the department, such as Graphics, Networks, and Parallel Processing. His current research interests included algorithm development for remote sensing, computer vision, content-based image retrieval, computer graphics, virtual reality and robotics. His passion for education

He is survived by his wife Robyn; children Joseph, 20; Kira, 18; Megan, 14; and Benjamin, 1; his parents, Kenneth and Rosemary Swets; and siblings Keith, Paul, Lynn, Mark, and Beth. 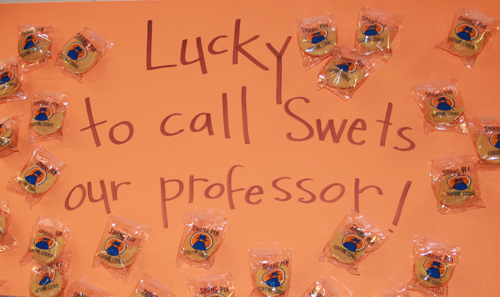