The Annual Meeting of the Nordland Heritage Foundation, the organization that brought iconic examples of Great Plains settlement to campus, including the Beaver Creek Lutheran Church, the Berdahl/Rolvaag House, the Eggers School House and the Rolvaag Writing Cabin, where author Ole Rolvaag penned his book "Giants in the Earth," will be held on Sunday, June 10.

The meeting marks the 35th anniversary since ground was broken for the Berdahl/Rolvaag House to re-locate to campus and celebrates the completion of various restoration and landscaping projects at Heritage Park. The Park and its facilities will be open for visitation and tours each Sunday from 2-4 p.m. from June 10 through Aug. 26. For tour information, call 605.274.4007.

The meeting will include:

Reservations for the Annual Meeting and Brunch are required. Cost for the brunch is $10. Contact James Wehde at 605.359.0123. 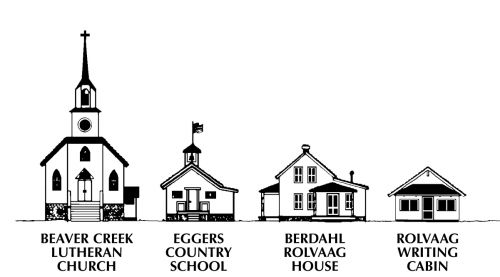