In the News: Student Entrepreneur Featured for Customized Shoes

Junior Brianne Bernard from Owatonna, Minnesota, is walking tall after her business for creating flashy kicks was featured in an article for the Sioux Falls Business Journal. Bri's Walking Canvas is a customized shoe design company to personalize shoes to fit every individual's taste.

The following is the story featured in the Sioux Falls Business Journal: 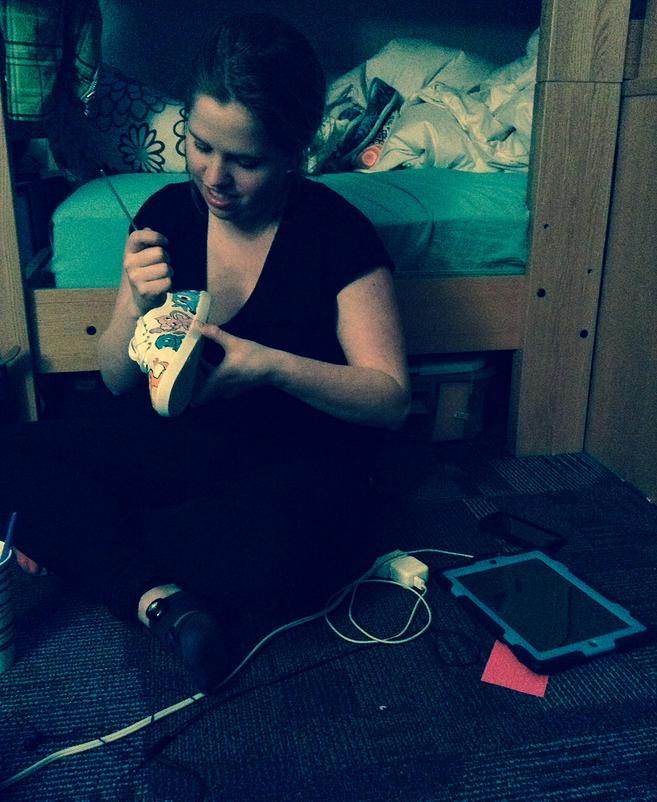 By Megan Raposa, Augustana class of 2015, for the Sioux Falls Business Journal

Not many artists can take their creations with them wherever they go, but Brianne Bernard's paintings go with her on every step she takes – literally.

Bernard is the founder of Bri's Walking Canvas, a business she started last year to sell customizable, hand-painted canvas shoes. Her customers come with a pair of shoes, and Bernard transforms them from a blank canvas into a walking work of art.

"I've just always been for customization," Bernard said. "I've found that painting and drawing has been a way that I can use my artistic talents to customize a shoe."

Bernard, a student at Augustana College, said she got the idea to decorate her shoes after purchasing a pair of white high tops. She decorated the shoes for the premiere of "The Hunger Games: Catching Fire" movie, and from there the ideas took off.

"That summer, I just bought a bunch of different colored shoes off Amazon and got a bunch of permanent markers and then just decorated a bunch of shoes," she said.

Bernard eventually switched from decorating with permanent markers to using acrylic paint, which she described as more cost-efficient. Not long after that, people began asking her to make shoes for them.

"I just wore my shoes around a bunch," Bernard said. "People saw them and said, 'Hey, those are really cool. Where'd you get them?' and I'd say, 'Oh, I made them for myself.' "

After making shoes for friends, Bernard launched a Facebook page last year for Bri's Walking Canvas, which is where she communicates with many of her customers.

Jaciel Keltgen, a business and marketing professor at Augustana, said she discovered Bri's Walking Canvas when Bernard wore her customized shoes to class. Keltgen is Bernard's academic adviser, and she said seeing her student start a business is "energizing."

"It's thrilling, actually, to know that she's actually using the concepts that we discussed in class," Keltgen said. "To see her being able to capture an idea and a talent and then use her business skills to promote it is absolutely thrilling."

A pair of Bri's Walking Canvas shoes costs $45 to $50, which Keltgen said is "a lot of bang for your buck."

"It's amazing to me that you can get an original work of art that you can wear all day long that costs $45," Keltgen said.

Bernard works with customers to figure out a theme and design for the shoes.

"I always have them provide the shoes for me," Bernard said. "It eliminates the problem of shoes not fitting ... as well as if they commit to buying the shoes, regardless of how much it costs, it means they truly want to get a pair of shoes done."

Bernard said she sends her customers pictures periodically while she's designing the shoes, and she has designed every theme from "Frozen" to sports teams to her most popular design, the Augustana mascot, Ole the Viking.

"I was kind of the envy of all my friends when I got a pair of shoes from Bri's," Hawk said.

Bernard said she hopes to increase her social media presence now that the weather is warming up and more people are switching from snow boots to slip-on shoes.

As far as the future of her business, Bernard said she's still learning what the next step will be.

"I'm in a small-business management class, and I'm using my business as my business for that class," Bernard said. "So I'll be able to see what steps I want to take in the business process to either expand, keep it small or just have it stay at Augustana College and those connected with it."