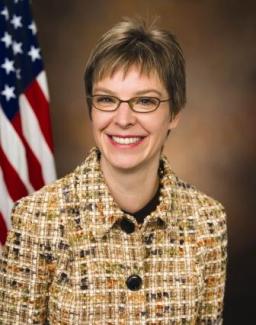 When Augustana alumna Nancy Erickson '84 was appointed Secretary of the Senate on Jan. 4, 2007, she became only the 32nd person, and sixth woman in history, to serve in that capacity.

With her term at a close, she is featured in this USA Today/Argus Leader media story, published on Tuesday, Dec. 2:

As election results trickled in Nov. 4, Nancy Erickson realized her 26 years of serving in the U.S. Senate were coming to a bittersweet end.

When Republicans take control of the chamber next year, Erickson, 53, a Brandon native, will lose her job as secretary of the Senate. During the past eight years of Democratic control, she has handled mundane jobs such as purchasing printer paper and overseeing payroll, as well as high-profile assignments such as signing all approved bills. Once, she even presided over the Senate.

Whatever her assignment, Erickson’s labors behind the scenes consistently have won the respect of Senate lawmakers.

“I’ll be able to walk out of here with my head held high. I’m really proud of the way I’ve managed this place. I feel good about this organization and the way I’ll leave it for my successor.”
— Nancy Erickson '84, secretary of the Senate

Erickson took over the secretary’s job in January 2007. She also spent 16 years working in a variety of jobs in the office of former Democratic Sen. Tom Daschle of South Dakota.

Lawmakers who have worked closely with her describe her as a consummate professional with a solid work ethic and a deep familiarity with Senate history.

“I knew she was going to do a good job, but I think she’s even exceeded most people’s expectations,” Daschle said.

Erickson majored in history and government at Augustana College in Sioux Falls, graduating in 1984. She moved to Washington, D.C., in 1987 to work at the General Accounting Office’s audit sites at the Federal Communications Commission and the Environmental Protection Agency. (The GAO later was renamed the Government Accountability Office).

After two years of missing friends and family in South Dakota, she decided to move back home. Then Daschle offered her a job as scheduler.

Daschle quickly gave Erickson more responsibility and promoted her to deputy chief of staff, allowing Erickson to develop close personal and professional relationships with other lawmakers.

“Many times, people were just content to talk to her instead of me,” said Daschle, who still keeps in regular contact with Erickson. “They knew they could many times accomplish what they needed simply by talking to her rather than coming to me.”

Daschle’s successor in the Senate, Republican Sen. John Thune, used to buy suits from Erickson’s father-in-law in Sioux Falls. He said he and Erickson bridge the partisan gap through shared loyalty to the NFL’s Green Bay Packers.

“We obviously come from different side of the political spectrum, but you can’t miss the way in which she conducts herself and goes about her work,” Thune said. “She’s a pro.”

After Daschle lost to Thune in 2004, Erickson began serving as the Democratic representative for the Senate’s sergeant at arms, the chamber’s top law enforcement official. After a brief time there, Senate Majority Leader Harry Reid asked her to apply for the secretary of the Senate post, a job that requires a vote from the full Senate. Erickson was voted in unanimously.

She recalled sitting down in her windowless office in the basement of the Capitol and Googling ‘secretary of the Senate’ to see what the job involved.

“It was a real educational curve for me when I came into this job about the great deal of work that goes on behind the scenes,” she said.

Ace Crawford, now a public affairs officer for the U.S. Attorney’s Office in South Dakota, remembers moving out to Washington to take a job in Daschle’s office in 1989 — her first time living out of state — and quickly becoming friends with Erickson and her husband, Tom. The group regularly went to movies and ballgames and had grill outs, and Crawford and Erickson would get together each Thursday night to watch the popular CBS sitcom “Knots Landing,” which went off the air in 1993.

“They kind of took me under their wing. They quickly became my home away from home,” said Crawford, who is the godmother of Erickson’s daughter, Drew. “I spent a lot of time at their place.” She said she looked to Erickson as her “moral compass” and often used her as a springboard when it came to making major life decisions, including employment decisions after Daschle’s 2004 defeat.

The secretary of the Senate post is almost as old as the Senate itself, created two days after the chamber held its first meeting in April 1789. Erickson is the 32nd person and the sixth woman to hold the position.

She has started a lecture series to help people understand the history of the Senate and the artwork hanging throughout the Capitol and oversaw a project restoring the old Senate chamber to how it looked in 1859.

Erickson also helped procure and restore an 11-by-7-foot painting of former Kentucky senator and presidential candidate Henry Clay, known as “the Great Compromiser.” The painting, found in a storage room in New York state with holes in the canvas and peeling paint, now hangs outside the Senate chamber.

“We all get tied up in the battles of legislation everyday, and she’s got a great passion to remind us about what this place really is and what we’re doing here,” said Democratic Sen. Maria Cantwell of Washington state. “She has a great sense of history.”

Erickson’s love of South Dakota history also is apparent throughout her cavernous office in the Capitol.

Above her desk is a railroad map showing the tracks that crossed South Dakota in 1886 before it became a state. It’s a nod to both her grandfathers, who worked for the railroad.

A Rand McNally county map of South Dakota reminds Erickson of her earlier job scheduling trips for Daschle, who visited all 66 counties each year. Erickson also has a map from the 1800s of Watertown, the city where her mother grew up.

As her time in the Senate winds down, Erickson confesses she doesn’t know what she will do next. The Senate is all she’s known for almost half her life. She got married and had a son and a daughter while working there, and it’s the only job her children have known her to have.

“My identity is the United States Senate, and so it’s a little daunting to think about life after the Senate,” she said with tears in her eyes.

“When I go onto the (Senate) floor in the morning, I never take that for granted. This has been a pinch-me job, it really has.”