Senior Trevor Sandgren and Dr. Jetty Duffy Matzner, associate professor of chemistry, had their work selected for the cover of the April 15 issue of Polymer Chemistry, a national, peer-reviewed scientific journal.

Sandgren, a native of Redwood Falls, Minnesota, worked with Duffy Matzner and Augustana’s Dr. Duane Weisshaar (chemistry) on a portion of this research project that has been five years of collaboration between Duffy Matzner and colleagues from Binghamton University, Dr. Wayne Jones and graduate student Megan Fegley.

“Megan came into Dr. Jones’ research group one year before my sabbatical out to his group and she was very interested in exploring synthetic strategies to examine various effects for these metal sensing polymers,” Duffy Matzner said. “I am an organic synthetic chemist, so we began having weekly Skype meetings that lasted her entire graduate career. We developed an organic polymer group in the Jones lab and I worked with three graduate students and about 10 undergraduates. I was very honored to help develop Megan's Ph.D. thesis.”

Sandgren and Weisshaar assisted with the determination of the molecular weights of these polymers after a National Science Foundation’s Experimental Program to Stimulate Competitive Research (NSF-EPSCOR) grant allowed the group to purchase an instrument for Augustana that could be used to find these measurements.

“This research has a long term goal of developing cheap and easy methods to determine the concentrations of various metal ions in waste water,” Duffy Matzner said of the research project. “It uses a long polymer chain attached to receptors for the ions that will change their photophysical properties. In other words if they come into contact with the contaminant, they will start to glow. The intensity of that glow can be used to find out how much of the contaminant is present in the waste water.” 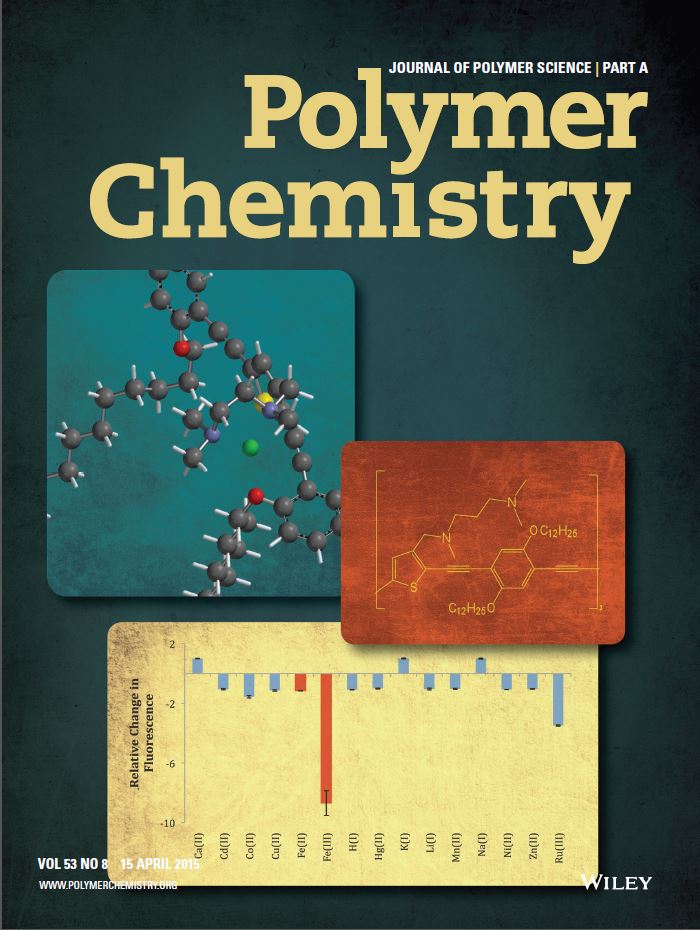 The scientific advancement from this research would allow them to use more light emitted from the sun and increase the efficiency of solar cells, one of the greatest current drawbacks, according to Duffy Matzner.

In its current stage, the research paper took six months to write and this work will be featured prominently in the next issue of Polymer Chemistry (pictured).

“We were honored and fortunate enough that [the magazine] thought this body of work, which is one of the few ways to detect the difference between different iron cations, was important enough to highlight,” Duffy Matzner said.

Her work on this project is not over and Duffy Matzner is already onto the next stage of her research.

“I am working with another graduate student at Binghamton University, Anting Chen, to develop solid-state models for our systems,” she said. “At Augustana I have worked with several undergraduates on a similar type project that uses some twists in the synthesis to examine polymers that could be used in hybrid solar cells along with Trevor.”

Sandgren presented his findings from that project in October 2014 at the Midwest Regional Meeting of the American Chemical Society.