Augustana Vikings have been — and will always be — those who explore, discover and pursue important undertakings; those who seek adventure and aspire for more than the ordinary; those who are truly interesting people.

When Sydeny Capers arrived on campus at Augustana, he knew he could create positive change. As a new student coming to South Dakota from Florida, he knew things would be very different.

“There’s the opportunity to be anything you want to be here,” said Capers.

As a member of the football team, not only is he a student-athlete, but his idea of creating change helped him become a student advocate for systemically non-dominant (Jenkins, 2018) students.

Early in Caper’s time on campus, he and a few friends came up with an idea for a club. But not just a club; a union. The Black Student Union (BSU).

In 2018, The BSU became an officially recognized organization by the Augustana Student Association (ASA). For Capers, the inspiration behind forming the club was seeing students of color leaving the university or not feeling that they had a place to be themselves.

“Coming to a predominantly white institution can be tough as a minority, so we wanted to do something that helped make it an easier transition for students of color,” said Capers.

On top of all of that, Capers is a biology major preparing to go to medical school to ultimately work in orthopedics.

Even with everything on his plate, Capers is thankful that the Augustana community offers him the support and resources to balance it all.

“My coaches, teammates, and professors have all been very helpful in managing everything.”

This past spring, COVID-19 added a whole new layer of complexity to the lives of students, staff and faculty at Augustana. The university extended spring break and ultimately moved classes online for the remainder of the semester.

While it’s unfortunate that spring semester changed so much, Capers still felt the support that he has come to expect from everyone at Augustana.

“My professors did really well with coordinating our schedules and tests in a way that helps us learn the material and still do well on assignments and tests,” said Capers.

As students finished the spring semester online, there is undeniable optimism about the fall and the plan to be back on campus.

“It’s going to be a good year,” Capers said. 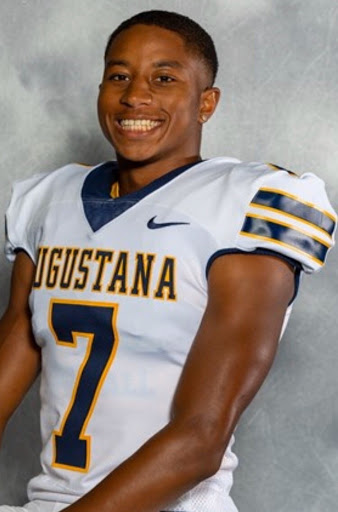