Top of the Key

As a leader on the basketball court, senior Cody Schilling hopes to inspire students to play at the "Top of the Key." 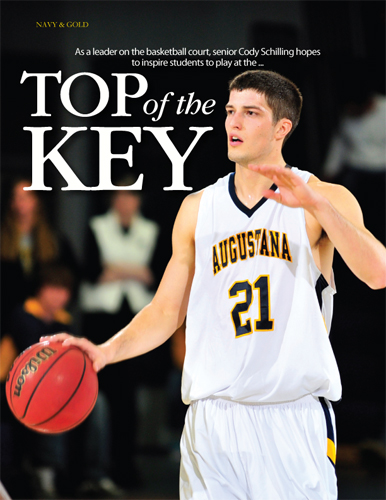 Cody Schilling deftly schools all those who challenge his basketball skills.

He is Minnesota’s all-time leading high school scorer with 3,428 points. He is among the top ten in six other career categories. At Augustana he is the career scoring leader.

“Cody has had a terrific four years at Augustana,” said Tom Billeter, head men’s basketball coach. “Not only has he done well personally and our teams have won a lot of games, he has also grown as a person. He will be well remembered for many wonderful accomplishments.”

Now, it’s time for the 6-foot-5 senior to exchange game plans for lesson plans. Finding an opening to the hoop gives way to opening minds.

“My goal is to teach and coach,” said Schilling, an elementary education major. “I would like to coach at a high school and teach at an elementary school. Right now my teaching emphasis is on grades three through six. I want to be the kind of teacher that motivates kids to want to be in school. I want to be a constant in their lives.”

Another option is obtaining a graduate assistantship, earning a master’s degree, and coaching/teaching at the college level. “The hardest decision Cody will have is whether he wants to teach and coach at the elementary/high school level or college. Either way, somebody will miss out on a very good teacher,” said Billeter.

Schilling’s athletic gifts have been on display for all to see. He is known throughout Minnesota as the ringleader of Ellsworth’s back-to-back state high school basketball championships (2007 and 2008). He attracted mega media attention during his assault on the state scoring record. He has been a key contributor to four straight winning seasons at Augustana and two appearances in NCAA Division II Central Region championship games.

“If it’s a game, at practice, or a board game, Cody is very competitive and that’s what has made him so successful thus far,” said Chad Hetterman, who played alongside Schilling for four years and is now a graduate assistant with the Augustana men’s basketball program.

Not as well chronicled was Schilling’s term as Ellsworth’s senior class president. He also participated in choir and snapped photos for the yearbook. “It’s a small school, so you get involved,” he said.

Subconsciously, the idea of becoming a teacher may have taken root his senior year when Molly Gort was his anatomy, biology, and chemistry teacher. Molly is married to his older brother, Curt, and is now an elementary school principal.

In the model classroom located in Augustana’s Madsen Center, Schilling has learned to put education theory into practice. He bought into the Education Department’s philosophy of creating classrooms and schools exemplifying all four values of the Circle of Courage – belonging, mastery, independence, and generosity.

“It (the Circle of Courage) has provided a most wonderful context for education faculty to prepare teacher candidates to go out into classrooms and create environments where all students can learn.” said Dr. Sharon Andrews, assessment coordinator for the Education Department and former Department Chairperson.

Schilling will spend the 2012 fall semester student teaching in the Harrisburg (SD) School District and in Ellsworth. The disparity in enrollments and cultural diversity will provide valuable training.

“Cody will be an awesome teacher,” Hetterman said. “His attitude towards kids and his ability to relate with them will be perfect. He has been a role model for a lot of kids at Ellsworth and Augustana while playing basketball and he will make as big an impact as a teacher.”

Billeter agrees. “Cody has all the tools to be a terrific teacher. He has worked the Augustana basketball camps for four years and does a remarkable job with kids of all ages. He is a very good communicator and a terrific role model.”

Arriving at Augustana in the fall of 2008, Schilling was undecided on a major. The answer came a few months later when he chose an education class for J-Term, a time of curricular exploration and enrichment for students.

“The course really caught my interest,” Schilling said. “What’s so great about Augustana is the professors are so good at preparing students. They always make time for you.”

To Augustana Professor Matt Johnson, Schilling will be a valuable asset to the school offering him a classroom.

“We need male role models in elementary education,” Johnson said. “He possesses many qualities that make him a good person and he will make an excellent teacher. I’ve witnessed Cody around my children as well as other children and it is very noticeable that he is comfortable in his interactions with them. The way he conducts himself on the basketball court and the judgments he makes speaks volumes as to how he will manage a classroom. I have no doubt he will inspire kids to do great things.”

Perhaps he will teach kids how to successfully execute the fade away jump shot that tormented opponents and led to high school and college scoring records.