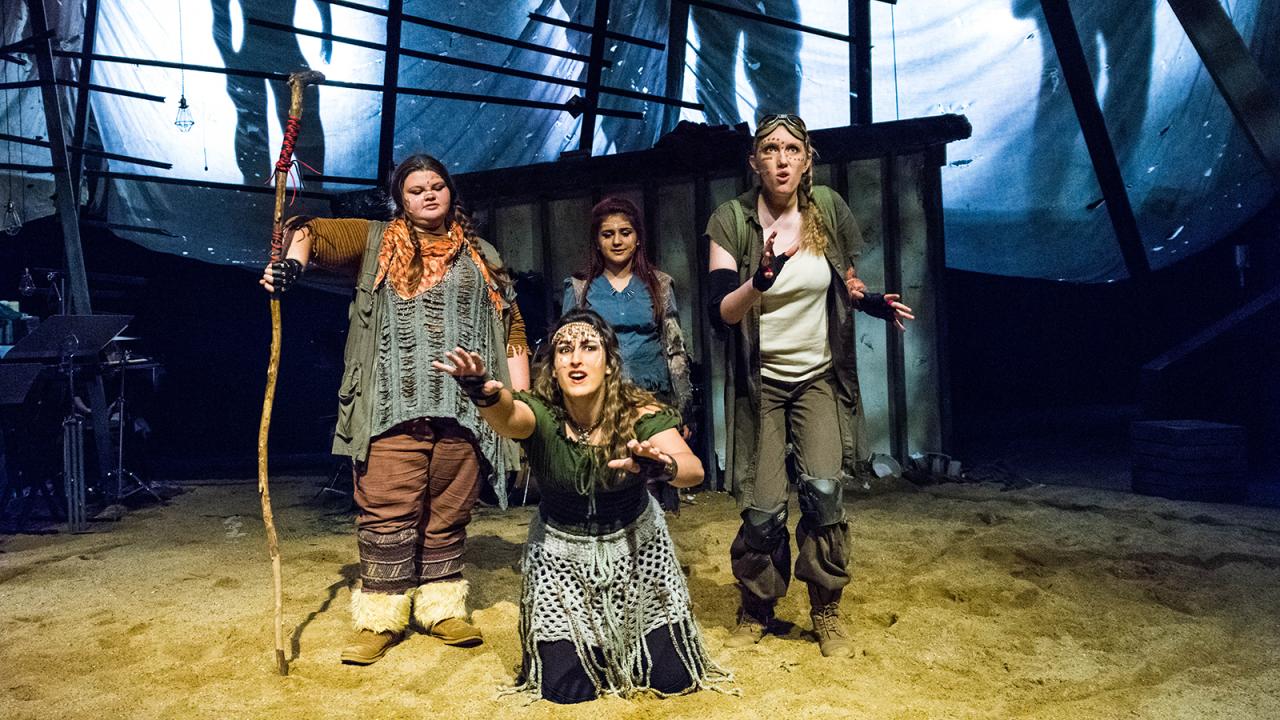 “Beginning is the key. And these old stories give us a place to start. These old stories do that in every culture, on every continent, after every catastrophe that cries for a new beginning. And so we tell stories of how it all began. And the world goes on again.”

— "When the World Was Wild and Waste"

A religion scholar and a composer walk into a theatre ...
It’s not a punchline. It’s a play.

To see “When the World was Wild and Waste,” written by Dr. Richard Swanson, professor of religion, and composed by Dr. John Pennington, professor of music, is to take a course in religion, world views and music all woven together through stories of creation.

In true liberal arts fashion, collaboration between a religion and music professor is commonplace at Augustana University. Pennington and Swanson have worked on three projects together including “When the World Was Wild and Waste,” which premiered in September in the Edith Mortenson Center Theatre.

“I love working with John because John is a genius,” Swanson said. “His musical sense is astonishing. I am an OK musician — I’m an old, broken-down trombonist. But I hand him a pile of words and he makes the kind of things you hear [in the show] out of a pile of words. Collaboration is really hard, but that’s why it’s good.”

Creating this show began, for Swanson, about 10 years ago, he said. Bringing it to the Edith Mortenson Center Theatre began last year when he and theatre instructor Jayna Fitzsimmons started workshopping it with students. From the script, to costuming and set design, to the music, students and professors collaborated on every aspect to bring this show to life from “a pile of words,” as Swanson calls it.

“When you get one of Richard’s scripts, it’s very exciting and also terrifying,” Fitzsimmons said. “You think of a more traditional script and it has this character saying this line and this other character says this other line and that’s not at all what you get from Richard.

“There’s not the type of line division or suggestions like the plays you’ve seen. There’s not a standard setting, characters don’t have names, et cetera, so we’re working all of that out as we go along.”

In the first few rehearsals, the five actors chosen for the show were told to just say a line when they felt like speaking and assigned themselves each character. For students Juvyan Abobakr ‘20, Sage Backer ‘18, Joscelyn Schipper ‘19, Alyssa Volmer-Johnson ‘19 and community member Sara Crosby, this was a show like they’d never seen before.

“We literally just took a text that was written like a book and everyone got to say what lines they wanted,” Abobakr said.

“We heard ‘just try it,’ a lot from Jayna,” Schipper said.

In their second rehearsal while going through a scene depicting a storm, the actors recalled Fitzsimmons telling them to read through it and then act it out without words. Because the words were all they had, Fitzsimmons wanted to challenge them to focus on creating the blocking without relying on those words to drive the scene.

“That was one of the hardest, but most beneficial directions we got from Jayna,” Volmer-Johnson said.

Having studied origin stories for more than 20 years, Swanson decided to blend many of them together to create “When the World Was Wild and Waste.” During his last two years writing the script, Swanson enlisted the help of Sage Backer ‘18 (also in the cast).

“There are, depending on how you count, six or seven different origin stories in the Bible,” Swanson said. “The chief ones: Genesis 1 and 2 and Psalm 104 are just crawling with lovely, but different creation imagery. I started by translating those and just listening to them and seeing what else they caught.

“The second place that biblical stories we wove together came from a really important recognition. All of the stories and especially the Genesis ones were not stories the Jewish community cooked up because they had nothing to do on a Thursday. These stories are stories that come out of a time of desperate catastrophe. The thing that struck me is, in every culture that I studied and on every continent in every century, the stories — Native American stories, African stories — every story that I studied, showed significant signs of having come out of a disaster. Therefore, I went back and translated Lamentations and the stories about the destruction of Jerusalem and wove those together. Because that’s the context out of which the origin stories in fact sprung. They had to create a world in order to survive the death of the world in which they lived."

At that point, Swanson says he began writing other stories and researching other catastrophes to make the connection clear to his audience. He said he hoped if there was one thing they would learn, it was this: “If there’s anything worth knowing about biblical texts at all it’s how it is a part of the world not separate from it.”

“I get paid to study the Bible for a living — this is a very weird thing. There are people who do that who close the covers of the Bible around their head and that’s all they ever want to know. That’s never been enough for me, nor for my parents or my family for generations. Anything worth studying is connected to the whole world.”

Collaboration between Pennington and Swanson started shortly after Pennington arrived at Augustana in 2008.

“I think within a couple of years Richard asked me to collaborate on a project,” Pennington said. “Richard knew I had done extensive work with spoken word and worked with creating a sound canvas, or a canvas of sound that the voice can react to — almost like in India with the drone. It’s its own skill to be able to write music that is interesting but not too interesting so you can still hear the words. It actually takes a bit of humility through the whole process.”

In their second collaboration project, a choral work on the book of Job, Pennington recalls getting a ream of words from Swanson who said to just “go to it.”

“And I just read the text over and over and waiting for something to speak to me and an idea surfaces,” Pennington said.

When Swanson approached Pennington for “When the World Was Wild and Waste,” he said he was happy to see Swanson had denoted which parts of the script he thought would be “singable,” refining the process for Pennington.

“It’s a fascinating process when you’re dealing with somebody else’s words where it doesn’t actually feel like composition, it actually feels like excavation,” Pennington said. “The melody is already there, it’s already in the word, and all you’re doing is just trying to get rid of the sand and illuminate it.

“I would say the text over and over and over and it seems unusual but it’s like it’s there. And then there is the craft of writing music for a show. I’ve never really worked with a musical, but I love the musicals ‘Spring Awakening’ and Lin-Manuel Miranda’s ‘In the Heights.’ What Lin-Manuel is doing is using a more progressive or pop sensibility. And he’s also setting the spoken word.”

Pennington said he wanted to write the music in “When the World Was Wild and Waste” in a progressive style as well.

“I didn’t know if it would work or not but I wrote a couple of things in May and we met and what was fulfilling for me was sometimes you want to write for yourself and what you hear and your vision, but this time it was more for me about excavating what was there and also what would the actors enjoy singing? And what would these musicians enjoy playing? I was most interested in finding out what a college student would think is hip.”

So how did a religion scholar end up walking into the theatre in the first place?

“I stumbled into that almost 20 years ago by accidentally using performance in a class. Students wrote papers that were so much better than anything I’d ever been able to get out of students before,” Swanson said. “You only have to hit me twice with a 2 x 4 before I get the message, and I’ve been using performance as a motive of analysis of biblical text ever since.”

In the last 20 years, Swanson estimated he’s worked with maybe 70 Augustana students creating plays and works of art like “When the World Was Wild and Waste.”

“So mostly because I can’t stop,” he said on why he uses the theatre. “I learn more than I can learn any other way. Here’s the big thing — it’s the pile of words thing again. I love words. I am a word nerd. I’m a serious word nerd, but until you take words and hand them to actors who put the words in their bodies or hand them to a musician who can make sounds, they’re just words.

"Things happen when you do that. Some of those things I have dreamed about, and some of them until [the actors or John] showed me, I had no idea. And that means that because I get paid to study the Bible for a living, I do this to study the Bible. This is my research.”