A variety of off-campus study options await students of the business administration department.  From Minneapolis to Oslo, the opportunities abound!

On June 23, 2016, Britain voted to leave the European Union (EU). The road to eventual “Brexit” has been long and difficult, and the long-term consequences are unclear. In the near-term, however, British politics (and European politics) have been thrown into crisis. Under the leadership of Professors Jason Harris and Bill Swart, students will explore Brexit (and the European Union), primarily in London. Through lectures, site visits and discussions, students gain the ability to think critically about Brexit, the European Union and macro-economic (regulatory) issues. Through numerous visits to institutions and presentations by elected officials, business representatives, and non-governmental organizations, students better understand the practical operations and impact of Brexit as well as the cultural dynamics of European (dis)integration.

The overall objective of the Brexit course is to explore the challenges Brexit poses for the United Kingdom along the four broad themes of EU membership: the free movement of goods, services, capital, and people.  In doing so, students and faculty will examine the legal and ethical issues that arise as Britain negotiates Brexit, paying specific attention to the national and international business environment, financial services sector, EU residents living in the UK, immigration, and refugee resettlement.  This knowledge helps students become more informed, sensitive and effective business managers.

Study abroad experiences should be planned in close consultation with your academic advisor. 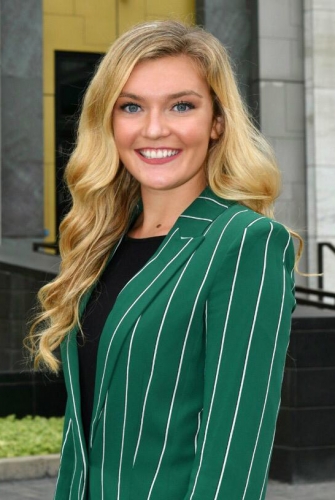 Chloe Bartels was given the opportunity to study in Peru. - "I was really fortunate to be offered a five-month internship with the U.S. Embassy in Lima, Peru in 2019. I was undertaking research for, and writing, major market opportunity reports, conducting bilateral trade policy analysis, and working with diplomats and Peruvian trade specialists to identify new opportunities for American exporters."