CWS in the News

For interviews or additional information, including hi-res images for your publication or news agency, please email the CWS or call 605.274.4007.

IN THE NEWS: When Colin Powell came to town: The 1995 Boe Forum

Gen. Colin Powell (1937-2021) was the first speaker in the Boe Forum on Public Affairs at Augustana University, presented by the Center for Western Studies on March 29, 1995. He had recently retired as chairman of the Joint Chiefs of Staff, and his talk was titled "Managing Crisis and Change."

Augustana University recently celebrated its 100th anniversary in Sioux Falls, but the institution is actually much older. Originally founded in Chicago, IL, in 1860, Augustana moved west with the people, earning the nickname "the college on wheels." There were several stops (and name changes) along the way before the school finally settled in Sioux Falls in 1918.

The Center for Western Studies has partnered with students and faculty of Augustana University and Flandreau Indian School on a unique exhibition at the Washington Pavilion, Sioux Falls' premier arts venue.

IN THE NEWS: Bringing the past to the present: the Center for Western Studies home to 80 in-house publications

The Center for Western Studies (CWS) was simply an idea by English Professor Herbert Krause in 1964. Krause, a poet, essayist, and novelist, was the first writer-in-residence at Augustana University. “He thought about establishing a school of writing but also wanted a collection of materials he could turn to for his research,” says Dr. Harry Thompson, executive director of CWS. “Krause was a historical novelist — and saw the Center as the Google of its day.”

The Board of Regents (now known as the Board of Trustees) officially established CWS in 1970, fifty years ago this year. "At first, it was a library," says Thompson. "But it didn’t take long before it grew to be an archives and then a publisher. Augustana has the distinction of being the only university in South Dakota to have a continuously operating academic press.”

“The Interior Borderlands: Regional Identity in the Midwest and Great Plains” has been named a Midwest Book Awards winner in the History-General category. The 30th annual Midwest Book Awards winners were announced on Saturday, June 27, during a regional online watch party. The awards program, organized by the Midwest Independent Publishers Association (MiPA), recognizes quality in independent publishing in the Midwest.

“The Interior Borderlands: Regional Identity in the Midwest and Great Plains” has been named a finalist in the History-General category of the 30th annual Midwest Book Awards. The awards program, organized by the Midwest Independent Publishers Association (MiPA), recognizes quality in independent publishing in the Midwest.

Edited by founding president of the Midwestern History Association Jon K. Lauck, “The Interior Borderlands” explores questions of geographical and cultural significance to the Midwest and Great Plains.

IN THE NEWS: Hicks introduces new readers to 'The Thresher' by CWS founder Herbert Krause 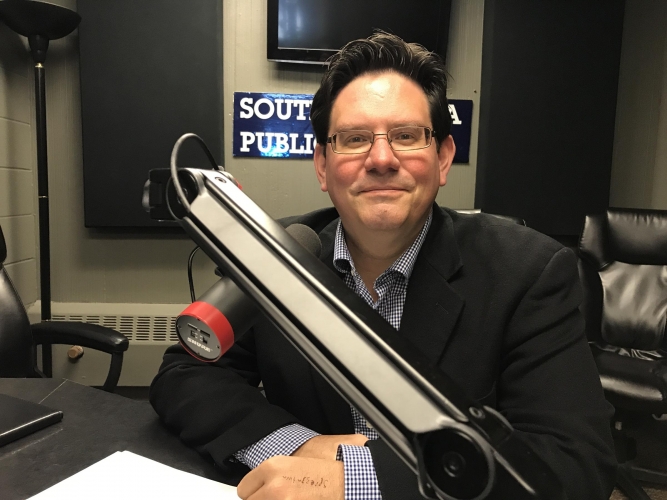 This fall, the Center for Western Studies released a new edition of Herbert Krause's classic Minnesota farm novel, "The Thesher," with a new introduction by Patrick Hicks. Originally released in 1946, the book is the second volume of a trilogy depicting the complex relationship between the land and those who farmed it.

Hicks, who succeeds Krause as writer-in-residence at Augustana University, has crafted a stirring introduction to this new edition, acquainting a new generation of readers with "The Thresher." He discussed the book with Lori Walsh on South Dakota Public Broadcasting's "In the Moment" program on October 13, 2017.

IN THE NEWS: Interest in Fred Manfred's 'Lord Grizzly' continues after Oscars night

Thompson discusses questions of authenticity relating to three versions of the Hugh Glass narrative – "The Revenant" film, the novel of the same name by Michael Punke, on which the film is partially based, and their precursor, Frederick Manfred's most critically acclaimed work, "Lord Grizzly."

As the author of the definitive narrative on Hugh Glass, interest in Frederick Manfred continues to grow in the wake of the Oscar-nominated film, "The Revenant." And as Manfred's work receives more attention, so do the new "Voices of the Northern Plains" exhibits at the Center for Western Studies, a portion of which are dedicated to Manfred and other important regional authors who re-imagined the pioneer period for twentieth-century audiences.

CWS Executive Director Dr. Harry F. Thompson recently discussed the author's quest for authenticity with reporter Mary Ann Grossmann. The following article about Frederick Manfred and his most famous work, "Lord Grizzly," was published by the Pioneer Press on January 8, 2016.

Attention readers and film-goers: Leonardo DiCaprio's new film, "The Revenant," is not based on Minnesotan Fred Manfred's 1954 novel "Lord Grizzly," although some people think it is. Others think it should be.

Manfred's daughter Freya, a soft-spoken poet who lives in Stillwater, tries to keep frustration out of her voice when she says, "I've gotten letters congratulating me on Dad's book being made into a movie. I tell them 'Lord Grizzly' is not the book they read."