"Aficionados of books about the history of the Old West will enjoy every page of 'Outlaw Dakota.' Wayne Fanebust owns right, title, and deed to all things early Dakota. . . . The book's research is deep, dogged, and careful, including contemporaneous newspaper accounts of events, laws in effect at the time, historical collections, personal memoirs, and books of the period." — Mark C. Dillon, Justice in the Appellate Division of the New York State Supreme Court 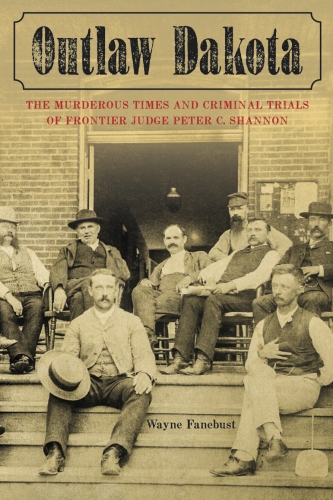 Dakota Territory was a rough-and-tumble country in the 1870s. Pioneer settlement had largely bypassed this land, home of the Plains Indians. But with the end of the Civil War, thousands of adventurers made their way up the Missouri River and out onto the plains. Rumors of gold in the Black Hills, even before Custer's 1874 expedition, enticed many a fortune seeker to Dakota Territory, where lawlessness ruled the day.

Tackett's Station, where some customers paid with their lives, the free-for-all that was Deadwood, and the nefarious river towns of Yankton and Pierre were rife with outlaws. To the Dakota frontier in 1873, President Grant sent Peter C. Shannon as the new Chief Justice of the Dakota Territory Supreme Court. A Pennsylvanian, Shannon brought the rule of law, trying murderers, horse thieves, vigilantes, men of fortune, women of the night, and a passel of blacklegs! Author Wayne Fanebust's new book, "Outlaw Dakota: The Murderous Times and Criminal Trials of Frontier Judge Peter C. Shannon," details the judge's experiences in Dakota Territory.

Among Shannon’s most notorious cases were those of Jack McCall, who swung for the assassination of Wild Bill Hickok, the Snake Creek lynching, the murder of Civil War hero Gen. Edwin McCook by “arch-villain of the West” Peter Wintermute, the triple lynching at Hangman’s Hill in Rapid City, the Independence Day murder at Crow Creek, the doctor-turned-highwayman John Parsons, the Indian Ring run by Dr. Livingston, and gambler George Knowlton's cold-blooded shooting of Black Hills-bound miner David Rauck.

“I’ll have it understood that this court is a gentleman.”
— Justice Shannon to Defense Attorney R. F. Pettigrew

Shannon, was "the complete judge—fair, fearless, dignified, and in control," writes author Wayne Fanebust. Perhaps too good a judge, for he fell victim to political machinations at the highest levels. Making no pretext of objectivity, newspapers served powerful political factions, attacking judges and politicians alike, and Fanebust makes use of these rich resources to capture the sensationalism that pervaded life in Dakota Territory.

About the Author: Wayne Fanebust has practiced law in California and served as corporate counsel in South Dakota. He is the author of several books, including "Cavaliers of the Dakota Frontier" and "Major General Alexander M. McCook, USA: A Civil War Biography." The author has dedicated Outlaw Dakota to Dr. Tom Kilian.