The Gift of Song

For professional opera singer Lindsay Ammann, class of 2006, her career is not about singing iconic roles in world-famous performance halls. It’s about using her God-given talent to tell stories that transport and inspire her audience. 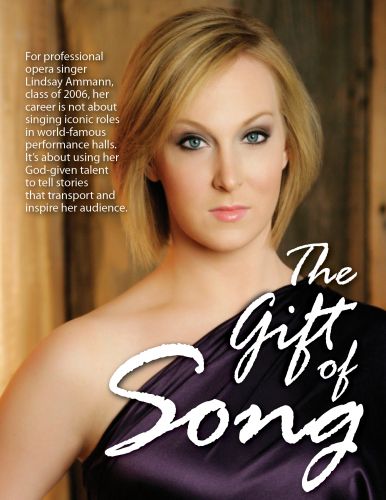 Lindsay Ammann started singing even before she could speak.

As a baby, sitting at the piano on her mother’s lap, Ammann would hum the notes her mom played.

She’s been singing ever since.

Today, at just 29 years old, she is considered one of professional opera’s most up-and-coming voices. Now living in Stuttgart, Germany, and singing for the Stuttgart Opera, Ammann has performed at many of the world’s premier opera houses including the house — New York’s esteemed Metropolitan Opera.

By all accounts, her life as a kid from South Dakota who once dreamed of becoming an archeologist, who played the trumpet and marched with the Lincoln High School Marching Band, and who eventually went on to sing at the Met, reads like a fairy tale.

But for her story, Ammann says, she’s not the writer.

“I know I didn’t choose this career. I believe that God chose it for me. Everything that has happened in my life has come with a strong gut reaction and a great feeling of clarity from God. I really feel that my voice is not mine. It’s something that has been given to me, that I’m supposed to use in the right way.”

Music in the House

The daughter of Augustana’s Dr. Bruce Ammann, professor of music and Band director, and MelaDee Ammann, a pianist and music teacher at Laura B. Anderson Elementary School in Sioux Falls, Ammann remembers her childhood home as one always filled with music.

“Growing up in our household, we all played instruments. In fourth grade I played the cello and in fifth grade I started the trumpet. I was in all of the choirs, every band, every ensemble that I could be in through elementary school, middle school and high school.”

While she loved music, Ammann says she was also reserved.

“I wasn’t a flamboyant, out-there, crazy kind of kid. I really was quiet and enjoyed observing people and situations. I’ve always been more of an observer.”

Ammann was just 13 years old when she met her first voice teacher, Cheryl Koch, a voice instructor at Augustana, during a summer music camp on campus.

Under Koch, Ammann realized that her voice, with its mezzo-soprano sound, was suited for opera. Together, they began her training with that direction in mind.

“I basically learned that this is what my voice is, it’s made for opera, so that’s the route we went.”

When she began her undergraduate studies at Augustana in 2002, she continued to study with Koch.

“[Working with Cheryl] was very much like how opera singers were trained in the past — when they would have a maestro and they would be the apprentice and they would actually live with their voice teachers and be with them constantly. That was one of the greatest benefits to my staying in Sioux Falls and being at Augie, that I got to spend so much time with my voice teacher.”

The two formed a close bond.

“There have been many ups and downs that have been shared with her because she was my voice teacher. When you’re dealing with something as intimate as your voice, you really do have to connect with the person that you trust on a deeper level beyond just a teacher,” she said.

“We both said that we went from student-teacher, to friends, to teacher-student. With where I am now, I’ve been able to help teach her about some other things in the opera world.”

After Augustana, Ammann went on to pursue her master’s degree at Indiana University where, she says, her “giant snowball started forming.”

“Once I was there, I made a point to track down the person who I’d been told was the best voice teacher there. I told her I had to study with her and I ended up being in her studio.”

At IU, Ammann got the chance to combine her singing with character performances.

“I had done a couple of small summer programs while I was at Augie where I had the chance to be in opera choruses, and I played Ruth in “Pirates of Penzance.” But, when I was at IU, I felt for the first time what it’s like to learn your role and rehearse and figure out what works and what doesn’t in order to put it all on the stage. I did four shows and had four big roles. It was a chance for me to really be on the stage; it’s where I really learned my lessons.”

By lessons, Ammann is referring to her roles as Dame Doleful in IU’s “Too Many Sopranos,” Maddalena in “Rigoletto,” Nettie Sloan/Aunt Bea in William Bolcom’s “A Wedding,” and Cornelia in “Giulio Cesare.”

She says playing the role of “Cornelia,” a woman terrified that her son will be torn away from her, in the production of “Giulio Cesare” helped her see the powerful way in which opera tells a story.

“Up until that point, I’d been doing a lot of comedy. I love performing comedy and I still do. But Cornelia is the first tragic character that I really got to delve into. There’s this glorious duet between Cornelia and her son. Every time I would sing it, I’d be on the verge of crying.

“What I learned is that my main job as a performer is not to feel the emotions myself, but to make sure that every single person sitting in the audience feels the emotion. It’s to make sure they’re feeling what I’m portraying. That’s a very powerful thing. It’s beautiful.”

She also learned the real magic of live performances.

“The reason someone should go to a live performance is because it’s alive. You never know what could happen. It changes for us, the performers, every single night. You never know what the ingredients will be that night that could totally change the show. We rehearse until we’re blue in the face, but every night’s a new opportunity to have a transcendent experience for someone in the audience. I love that.”

While still a student, Ammann also served as a young artist with the Opera Theatre of Saint Louis for two seasons where she performed the roles of Kate Pinkerton in “Madame Butterfly,” Page of Heriodas in “Salome,” and covered Samira in “The Ghosts of Versailles” and Antonia’s Mother in “The Tales of Hoffman.”

In 2009, Ammann began her Resident Artist program with the Pittsburgh Opera where she sang the roles of Olga in “Eugene Onegin,” Dame Quickly in “Falstaff,” Lucretia in “The Rape of Lucretia,” Marcellina in “Le Nozze di Figaro,” Alisa in “Lucia di Lammermoor,” Goffredo in “Rinaldo,” and covered the title role of Carmen.

While in Pittsburgh, she got the call every hopeful opera singer dreams about.

“I got a phone call from the artistic director at the Pittsburgh Opera who said I was being released from the program in order to make my Met debut.”

At just 26, Ammann sang in Robert LePage’s “Ring Cycle” as Rossweisse in “Die Walküre” under the baton of Maestro James Levine at the Metropolitan Opera in New York City. According to research done by the Met, when Ammann was a national semi-finalist in their competition in 2007, she was only the third South Dakotan to sing on the Met stage in its 128-year history.

The experience, she remembers, seemed surreal.

“I was the little kid at the Met. I was in a room with some of Opera’s biggest superstars. I got to sing the music that I love with people who are amazing. That changed everything. It put everything on a totally different level.”

Ammann’s Met debut was chronicled on the “Die Walküre” DVD from the Metropolitan Opera’s “Ring Cycle” and the documentary DVD “Wagner’s Dream,” which has been shown nationally on PBS and around the world. The CD from the production, “Twilight of the Gods,” won a Grammy award last month.

The Language of Opera

Ammann admits singing mostly in German, Russian and Italian is “a little crazy.”

“At any given time, I can be working on an English piece, a German piece and a Russian piece. It’s not uncommon for three or four languages to be running through my head. It gets a little messy,” she says.

“I do have a French minor from Augie, so that helps a little. We’re learning German now that we live here. There are books out there that have phonetic transliterations of the text so I can know what sound I’m supposed to be creating. I also work with native-speaking coaches as well. I do get asked a lot, ‘do you know what you’re singing about?’”

“The answer is, ‘of course.’ It’s my job to make sure I know the story so I can portray the character accurately and send out the correct emotions and feelings for the audience.”

Whatever the language, Ammann admits that balancing life as a professional opera singer can be challenging.

“My job is 24 hours a day, seven days a week. Part of my job is making sure I’m healthy all the time. If I’m not healthy, I can’t sing. Singing is my job. Part of my job is learning new music, perfecting notes, learning new roles and perfecting existing roles. On a typical day of a show, I’ll end up at the opera house 90 minutes before the curtain opens. From there, I get my make-up done, get my wig fastened, find my costume, warm-up, do some stretches and focus my mind so I can really be there — be ready to sing all the right words, with all the right notes, portraying all the right emotions for the audience.”

Now 29, Ammann’s resume reads far beyond her years. In 2011, she was the Alto Soloist in the Pittsburgh Symphony’s fully staged production of “Handel’s Messiah” and covered the role of Goffredo in “Rinaldo” with Lyric Opera of Chicago.

The Pittsburgh Post-Gazette called her voice “capable of sinister low chest tones and robust high notes that can express a gamut of emotions” while Opera News describes her stage presence as “a force to be dealt with.”

As for what her future holds, Ammann says right now, she’s enjoying her time living in Germany.

She’s singing Third Lady in “Die Zauberflöte” and Flosshilde in “Götterdämmerung”, while covering Waltraute in her debut with Stuttgart Opera. This spring, she’ll make her Casals Festival debut in Puerto Rico as Brangäne in a concert version of “Tristan und Isolde,” followed by a reprisal of her role with the Metropolitan Opera in New York as Rossweisse in “Die Walküre” under Maestro Fabio Luisi.

No matter what the future holds, Ammann says she’s confident her faith will guide her.