'Awake in Me' to Premiere at Augustana Jan. 13 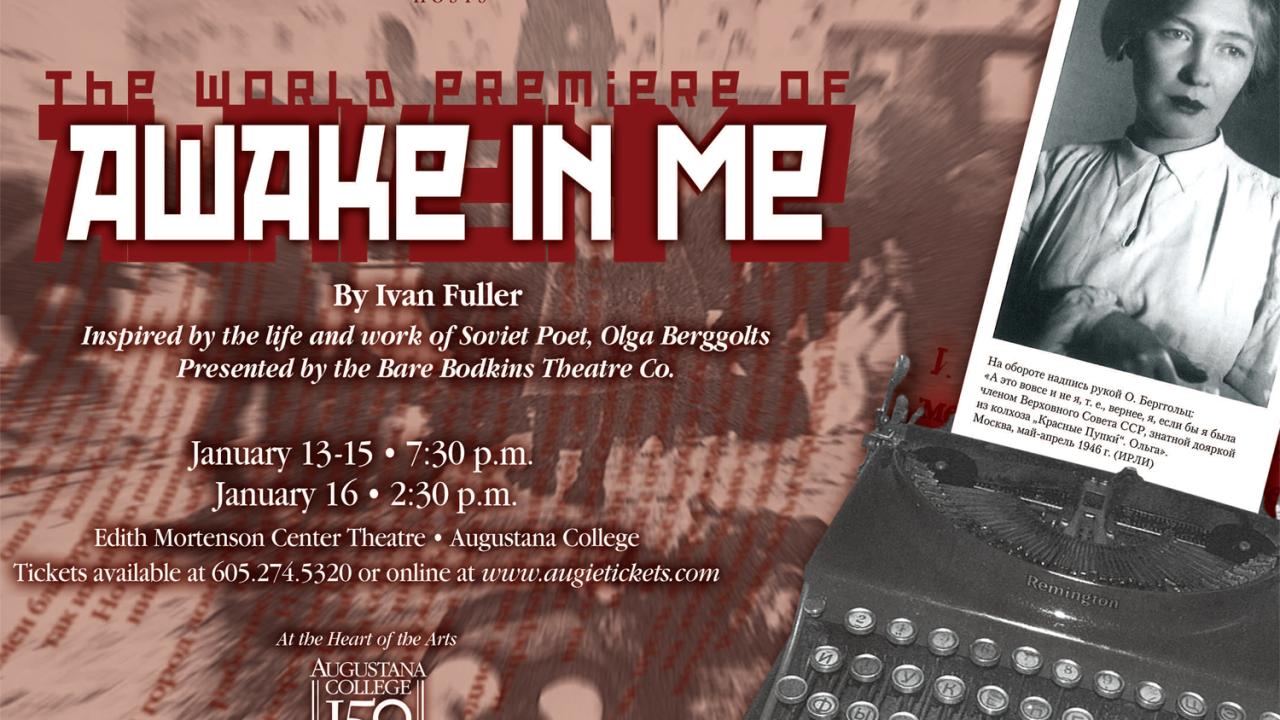 Picture a post-war, still fragile Leningrad, mid-1970s – three decades after one of the most deadly and destructive sieges of World War II.

Enter a less-than-objective newsman, a passionate (and dead) poet and a sister who wants to bury the past.

Welcome to Awake in Me, a haunting romantic tragedy about the loss of identity, inspired by the life and work of Soviet Poet Olga Berggolts. The play will premiere at 7:30 p.m. Thursday, Jan. 13, in Augustana’s Edith Mortenson Theatre. Additional performances will be held at 7:30 p.m. Jan. 14-15 and at 2:30 p.m. on Sunday, Jan. 16.

Written in 2009 by Dr. Ivan Fuller, chair of Augustana’s Performing and Visual Arts Department, Awake in Me is part of Fuller’s “Siege Cycle,” a collection of plays inspired by the nearly 900-day-long Nazi siege of Leningrad during WWII. Fuller developed the series while working as playwright-in-residence for Summer Literary Seminars in Vilnius, Lithuania.

Awake in Me follows Russian journalist, Dmitri (played by Fuller), as he visits the poet’s sister, Maria (played by Phyllis Schrag), in 1975 with the goal of writing a story about the recently deceased Olga (played by Vickie Fuller). Not the typical, objective newsman on assignment, Dmitri has a passionate connection to the poet who was once called the Madonna of Leningrad. Once he wins the trust of Maria, the two begin a journey of memory and revelation that takes them back to the start of Olga’s work as a poet, wife, mother, prisoner, radio personality, hero of Leningrad during the WWII siege and, ultimately, a figure of great tragedy. The play is presented by the Bare Bodkins Theatre Company.

In March 2009, Augustana presented the first installment of Fuller’s “Siege Cycle,” Eating into the Fabric, a work that received the “Best New Play” award from the Great Plains Theatre Conference in 2009.

Tickets cost $12 for adults, $8 for seniors and students, and are free with a valid Augustana ID. They can be purchased in advance by calling 605.274.5320 or online at www.augietickets.com.