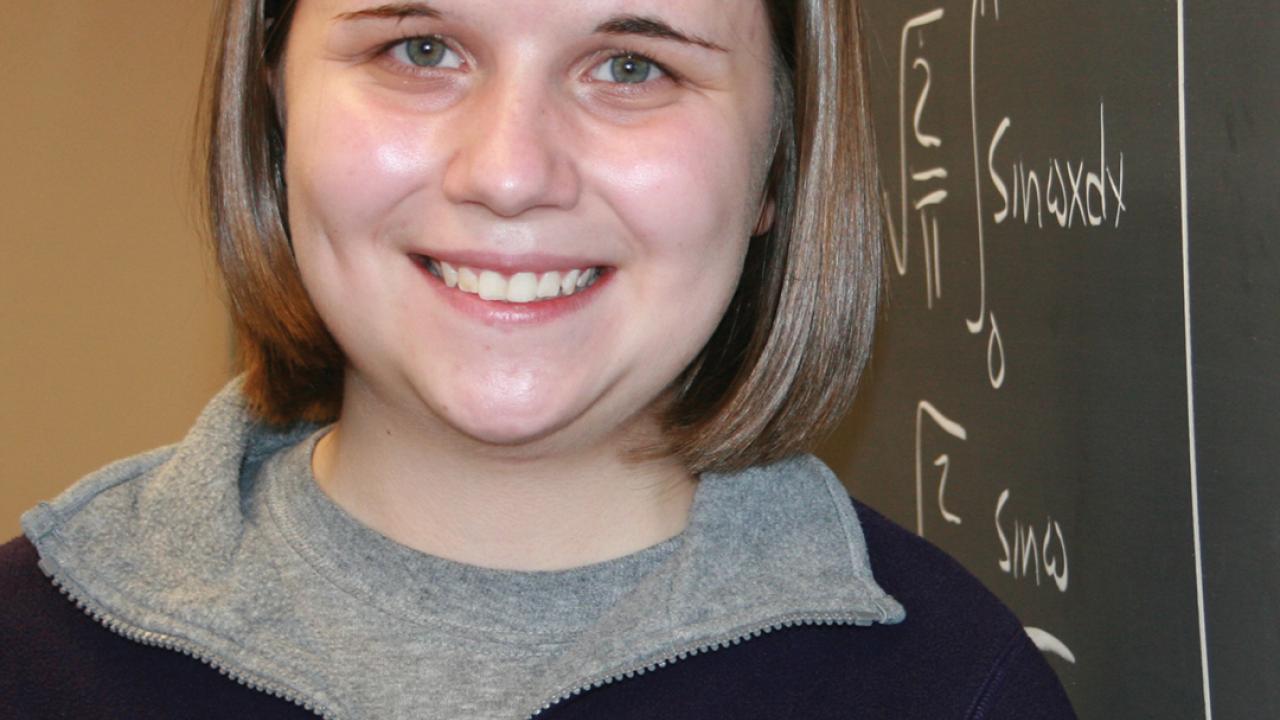 The Augustana Physics Department today announced that Bethany Jochim, class of 2011, has been named a recipient of the prestigious Leroy Apker Award, the top undergraduate honor awarded by the American Physical Society (APS).

Two Apker Awards are given annually to recognize outstanding achievements in physics by undergraduate students. Each award consists of $5,000 to the recipient and an allowance for travel to the APS meeting at which the award will be presented. In addition, the Augustana Physics Department will receive a $5,000 award to support ongoing undergraduate research.

Jochim, now a first-year physics Ph.D. student at Kansas State University, had a successful career as a student researcher at Augustana. In her four years on campus, she had five research articles published in mainstream peer-reviewed scientific journals – an astounding accomplishment for an undergraduate, according to physics scholars.

Jochim, a native of Pierre, S.D., says her curiosity and fascination with science began when she was in high school.

Her physics teacher had spent a class period introducing the Heisenberg Uncertainty Principle, developed by German Physicist Werner Heisenberg in the late 1920s.

“It was all so interesting to me, but I felt like they weren’t telling me enough. It sounded so strange and weird and interesting. I wanted to learn more about it. I started researching it more on my own. From there, I became interested in atoms and molecules and the quantum mechanical principles that govern their behavior.”

According to Dr. Eric Wells, associate professor of physics at Augustana, Jochim’s early interest in science was a sign of what was to come.

“Bethany was the kind of student who worked all the problems in the book, even when they weren’t assigned. That’s a sign of a true, born-to be researcher – someone who has that eternal thirst for knowledge,” he said.

After coming to Augustana, Jochim’s interest in physics only amplified. Her hard work and intensity paid off when she was accepted to participate in a summer research project after her freshman year.

Starting that summer and continuing throughout her time at Augustana she worked with Wells researching various processes by which molecules break up in electric fields, either from laser pulses or passing ions. The experiments were conducted at the J.R. Macdonald Laboratory, located at Kansas State University, as part of the longstanding relationship between Wells’ research group at Augustana and Professor Itzik Ben-Itzhak’s group at KSU. Nearly 25 Augustana students have conducted experiments at the Macdonald Laboratory since 2004, taking advantage of the available advanced laser facilities and collaborative opportunities with the scientists there.

Most recently, Jochim has worked on understanding how ultrashort laser pulses can interact and control individual molecules. This research, which is funded by the National Science Foundation (NSF) and the Department of Energy, might one day lead to new ways of controlling chemical reactions, limit by-products, and create new materials. For now, there are a number of fundamental challenges that need to be overcome, and solving these problems has the focus of Jochim’s efforts. This included spending the summer following her junior year at KSU as part of the Research Experience for Undergraduates (REU) program funded by NSF. The ongoing collaboration between Augustana and KSU allowed the continuation of her work throughout her senior year, including several trips back to KSU for further experiments.

This past summer, she was invited to present the results of her recent projects at the annual meeting of the Division of Atomic Molecular and Optical Physics of the American Physical Society in Atlanta and also represented her research collaborators at an international physics meeting in Belfast, Northern Ireland.

Before the Apker Award, Jochim received a number of honors while a student at Augustana. She was named the Rossing Physics Scholar for 2009-2010 and 2010-2011, an award named for Dr. Thomas Rossing, an accomplished physics scholar, and was among a select group of recipients honored by the prestigious Goldwater Scholarship for the 2009-2010 academic year.

At Kansas State, she was granted a research assistantship and was awarded the Timothy Donoghue Fellowship – an honor that speaks to both her skill and the experience she brings to the table, her mentors say.

“She’s too modest to tell you this, but she got accepted to every grad school she applied to. At Kansas State, because of her experiences at Augustana, she’ll be conducting second- or third-year graduate level research during her first year,” Wells said.

After graduate school, Jochim hopes to teach at the university level and conduct research.

“The research I’ve been part of and the articles we’ve published are a testament to how the faculty here [at Augustana] can get students involved. That’s a really unique and special opportunity,” Jochim said. “In the future, when I do research as a professional, I’d like to involve students in the same way that my professors here have involved me.”