O'Hara to Class of 2016: 'Cultivate Your Curiosity' 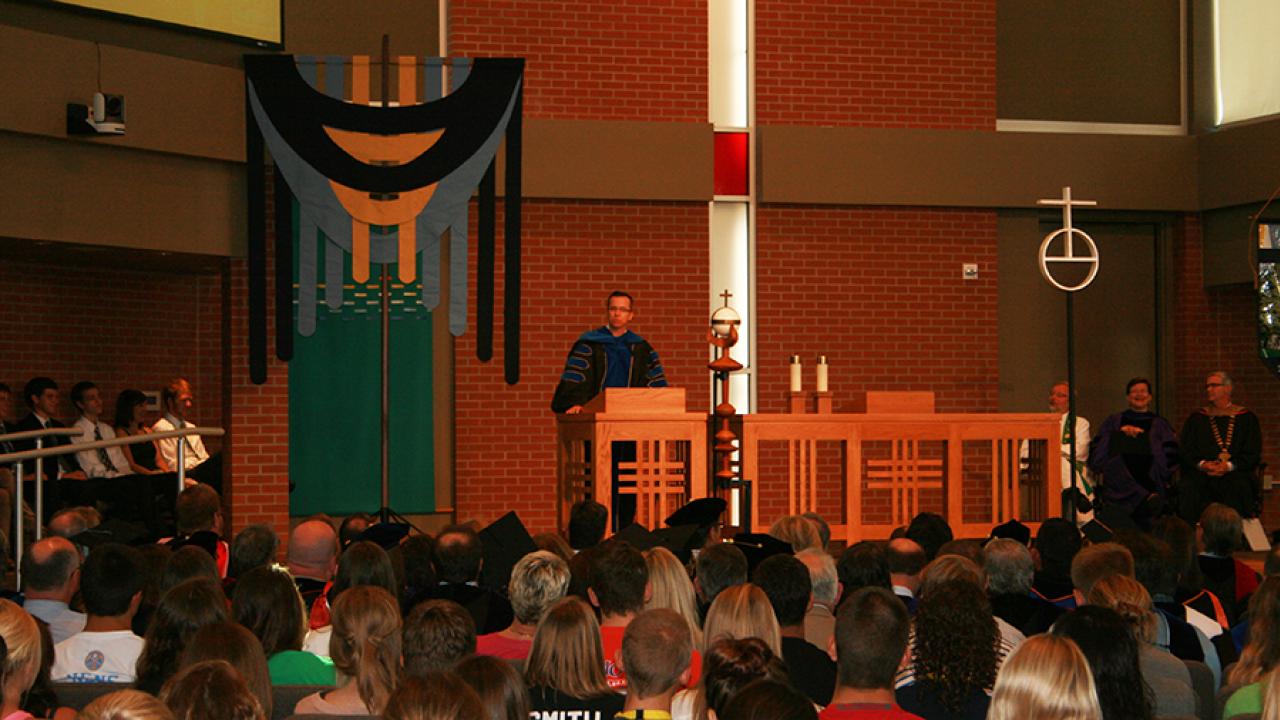 Dr. David O'Hara, associate professor of philosophy and classics and recipient of the 2012 Vernon and Mildred Niebuhr Faculty Excellence Award, delivered the keynote address at the 2012 Opening Convocation on Tuesday, Sept. 4, at Our Savior's Lutheran Church:

Once, when I was visiting my brother in New Orleans, I went to a church in his neighborhood. The service wasn’t like my church at home. During the sermon, people put their hands in the air, as if to ask questions. But they didn’t wait to be called on. They just dove right in to offer their vocal affirmations of the sermon’s more salient points, mostly with the word “Amen!”

I’m glad I had that experience, though I’m not sure I want it to happen in my classroom. Still, I like the involvement of the listeners. It definitely keeps you from getting bored.

I suppose that in the upper Midwest we do not do the hands-in-the-air-shouting-Amen thing during talks. Even still, if I were to say “sometimes school is boring,” I imagine many of you would at least think to yourselves a fairly hearty “Amen!”

Speaking of boring things, I wanted to entitle this talk “Acedia1 and Curiositas,” because I really like ancient languages and their medieval uses. But if I had, even the title of my talk would have been boring to most people.  With the current title, it sounds like I’m going to talk about something cool like the new Mars Rover. Sadly, I am not.

Instead, I want to talk to you about an interesting book I’ve been reading, John Steinbeck’s "Log from the Sea of Cortez."2 Really, this isn’t a book report so much as me trying to tell you what I wish someone had told me when I began college. For those of you who like the short version, it boils down to this: if you do not already know how, you should learn how not to be bored. Attending to your curiosity helps.

Book Report on Steinbeck: “We were curious.”

Okay. Book report: In 1940, Steinbeck – you know, the author of works like "The Grapes of Wrath," "Cannery Row" and "Of Mice and Men" – set off on an expedition in the Gulf of California with his friend, marine biologist Ed Ricketts. The ostensible purpose of their trip, he says, was “to observe the distribution of invertebrates, to see and to record their kinds and numbers, how they lived together, what they ate, and how they reproduced.”

Read more about the class of 2016 and see photos.

It makes me glad to know I am not the only humanities guy who loves to tag along with biologists and peer over their shoulders at the marvelous things they get to see.

But Steinbeck writes that those high-sounding activities and researches were only one of their reasons — they were the reason they gave people who asked them why they were going. But honestly, they were far from the most important reason. The real reason, he says, is this: “we were curious.” Selah.3

Steinbeck: Everything is Related

Steinbeck’s book is ostensibly about marine biology, but in it you quickly realize that marine biology is always about much more than marine biology, especially when we enter it with genuine curiosity.  Let me clarify what I mean by giving you a little word-history: the root of the word “curiosity” means “care” or “attention.” It’s not just vague wonder; it’s the combination of wonder with careful attention to the world.

In writing about biology, Steinbeck is writing about life, about philosophy and science and politics. This is what we do here: we search for the connections between things. It is hard sometimes to explain to people what the liberal arts are about, because when you put it in the plainest terms, it can seem somehow too simple, too obvious. And it is very simple. But its simplicity does not imply that it is easy, nor that it is worthless. A liberal arts education is like a pearl, something simple, arising from an inner irritation, a slow accretion resulting in a thing of great beauty and value, something we produce over a lifetime, an achievement. (And, to pursue the analogy a little further, I suppose professors are like people who seed oysters with irritants. Our “irritants” are questions.) Its worth is far more than monetary; it is the curious pursuit of the connections between all things.

Later in his book Steinbeck talks about landing near the city of La Paz, and being surrounded by small boys as he and his friends collected invertebrates along the shore. The boys, seeing them bent over and searching, asked them, “What did you lose?”  “Nothing,” they replied. “Then what are you searching for?” they asked. And this is often a difficult question to answer.

The Power of Beliefs

What are you searching for? And how will you know when you find it? We too have ostensible purposes, the story we tell our serious relatives when they ask why we study, why we go to college, what we hope to do. Often we reply with a story that seems like a good one.

If you tell people you’re going to major in Art or Physics, they may look at you with pity or concern or disbelief and, if they’re not too polite, they’ll ask you the uncomfortable question: “What are you going to do with that?” They mean, of course, “Can you make enough money with that? How will you live?” The safe thing to do is to tell them you’re planning to go to med school.

The trick, of course, is not to become satisfied with your own safe story too easily, not to fall into the trap of believing the plausible story you tell in reply to those uncomfortable questions about your future.

In fact, I think boredom often begins when we start to care too much about those serious stories we tell about our lives, the ones we hope others will care about. If we become too fixated on accomplishing, in some distant future, the practical and respectable things that will make others respect us, we can easily come to view the events of the current day as an obstacle to be overcome on the way. As a result, rather than enjoying our today, we endure it.

Steinbeck felt this pull between telling people the truth about his curiosity and the desire to tell them something they would find satisfying. He says that he wanted to tell the children on the beach that “We search for something that will seem like truth to us; we search for understanding; we search for that principle which keys us deeply into the pattern of all life; we search for the relations of things, one to another, as this young man searches for a warm light in his wife’s eyes and that one for the hot warmth of fighting.”  (92)

And there is nothing boring about that.

Most of what Steinbeck wrote seems to be informed by his belief that the everyday stuff of life is in fact really interesting, and that everything is related. The upshot of this belief is that he found ordinary people and situations interesting, and was able to portray them as though they mattered.

How do you fight boredom?

Okay, so what if you find that, despite your best intentions, you are in fact bored by your studies? What if you find it hard to consider ordinary situations interesting? Let me offer some advice that I wish I’d had when I was beginning my studies:

How? There are lots of ways. Let me name a few:

Get to know your faculty. You are surrounded by people who have devoted their lives to rigorous study and to the love of teaching. Do you ever wonder why? Ask us for stories. Sit in our offices and ask us what it means to study what we study. Ask us why we do what we do, why it matters. And don’t be surprised if we ask you for your stories, too.

Along the way, have the courage and self-discipline to take the classes you are afraid of.

Take business law, or Constitutional law, but don’t just memorize the way the laws currently are; try to find out what makes a law a good law and a just law so you can someday help us to make even better ones.

Take theology not because you must but because you recognize that if you don’t think about God someone else will do your thinking for you and they will dominate the conversation.4

Study nursing and education and music and physics and in each case ask, how can I contribute to this discipline? How can I improve it? How can I carry on its legacy?

In short, cultivate the idea that everything that happens to you is interesting. You are becoming something new.

Each of you, listen: Your lives are interesting. The things that drive you, the things about which you are curious, matter. Don’t let yourself fall into the belief that they, or you, are boring.

This text is copyright 2012, David O’Hara.  Feel free to share it and copy it with proper attribution.

1. There’s a lot more to be said about both Acedia and Curiositas, but there wasn’t time here. They’re not quite the same as “boredom” and “curiosity,” though they bear some family resemblances. Try googling either term, or both, and see what you find.
2. If you’re reading this footnote, you’re probably the sort of person who cares about the background of books, so here’s a tip: if you buy Steinbeck’s book, get the more recent Penguin edition, because it has a fascinating and delightful appendix entitled “About Ed Ricketts.” Mine is Penguin, 1995, published in New York.
3. This is a word I take from the Psalms. I take it to mean something like “pause for a moment and think about that before you rush on to the next sentence.”
4. This idea is from Wendell Berry.