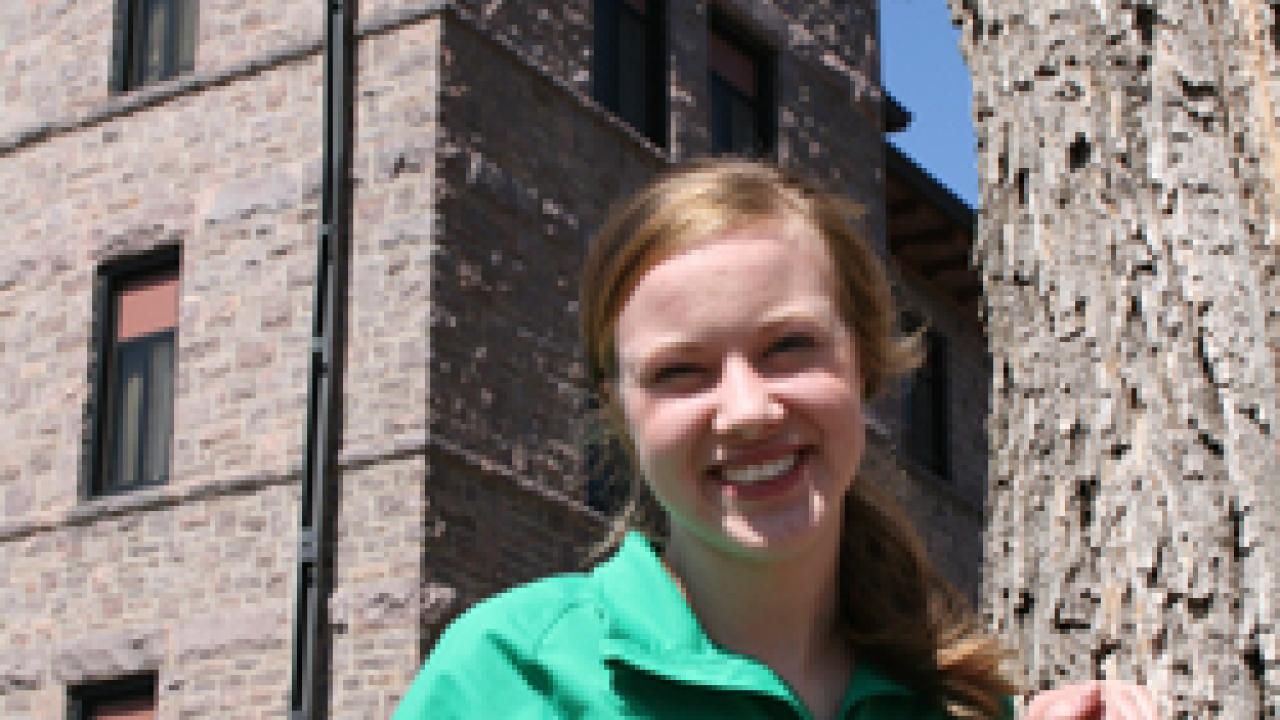 The Barry M. Goldwater Scholarship and Excellence in Education Foundation has named Augustana junior biochemistry major Ruthellen "Elle" Tornberg a recipient of the prestigious Goldwater Scholarship for the 2013-14 academic year. Tornberg, a native of Harrisburg, S.D., is one of only 271 Goldwater scholars nationwide to receive the award, given to accomplished college students who intend to pursue careers in science, mathematics and engineering.

The Goldwater Scholars were selected on the basis of academic merit from a field of 1,107 mathematics, science, and engineering students who were nominated by the faculties of colleges and universities nationwide. Of the scholars, 176 are men, 95 are women, and virtually all intend to obtain a Ph.D. as their degree objective. Twenty-seven Scholars are mathematics majors, 159 are science and related majors, 71 are majoring in engineering, and 14 are computer science majors. Many of the Scholars have dual majors in a variety of mathematics, science, engineering, and computer disciplines.

The one and two-year scholarships will cover the cost of tuition, fees, books, and room and board up to a maximum of $7,500 per year.

At Augustana, Tornberg has been a member of the College's summer Undergraduate Research Program, an initiative that places undergraduates in the field at laboratories, hospitals and research institutes throughout the U.S., for the past two years in a lab directed by Dr. Jared Mays, assistant professor of Chemistry. This summer she'll work in a microbiology lab at the University of Iowa. After graduation, she plans to pursue her M.D./Ph.D. degree.

"I love the service aspect of the medical field but I also love the puzzle of research," Tornberg said. "In high school, I had the chance to travel to the Amazon region of Peru twice on medical mission trips. Those experiences really first drew me in. I've also done some shadowing here in town and I serve as a pediatric companion at Sanford Children's Hospital."

"He actually took our class to Science Day at Augie and from there I was hooked. I got to meet a lot of the faculty and saw how much interest they took in their students," Tornberg said.

On campus as an Augustana student, her interest in science intensified.

"During my freshman year, my chemistry professors really encouraged me to experience summer research. After spending a summer doing medicinal chemistry in Dr. Mays' lab, I found I really enjoyed and had a knack for research. I suppose my curiosity has always gotten the better of me."

After working with Tornberg as a student, Dr. Mays calls her potential "nearly limitless."

"With regard to my observation of Elle’s course skills, there have been very, very few students with the innate intelligence, work ethic, and capacity to solve complex problems as Elle. The academic accomplishments that Elle achieved in my course are representative of her past and current track record and that result from the combination of her innate ability and hard work. In the past year, Elle has received numerous awards and recognition for her talents. Some of the most noteworthy include: being our 2012 recipient of the American Chemical Society Polymer Chemistry Award (for outstanding work in organic chemistry); being voted 2012-2013 co-president of Augustana’s chapter of the Student Affiliates of the American Chemical Society (for which I am the faculty advisor); being one of four students to receive Sophomore Honors (with a 4.00 cumulative GPA); and  taking second place at the Sioux Valley Section American Chemical Society Poster Competition (for which she received funding to travel to her second National Meeting of the American Chemical Society). At this stage of her career and education, Elle has literally swept the board with every major accolade and accomplishment that is readily available to students at Augustana College."

"This summer, Elle was selected to participate in the 2013 Summer Undergraduate Medical Scientist Training Program at the University of Iowa, working in the lab of Dr. Alexander Horswill. Out of all the undergraduate students I have worked with and known during my 10-year career as a medicinal chemist, Elle is easily ranked in the top 2 percent. Very, very few students have the unique combination of aptitude, motivation, and potential as Elle and I believe that her potential contributions to the medical and scientific communities are nearly limitless," Dr. Mays said.

Since 1989, 17 Augustana students have received Goldwater Scholarships, a statistic that places the College among the highest regionally for Goldwater scholars, both in total numbers of scholarships and scholarships per capita.

"The fact that Augustana students continue to be recognized for this prestigious award says a lot about the caliber of this institution," says Dr. Mark Larson, assistant professor of Biology. "Students can't earn these awards unless they have good access to quality research opportunities. In addition, good faculty mentorship in the scholarship application process is critical to the end result.  In addition to our students' achievements, Augustana's faculty commitment to students is something we're very proud of."