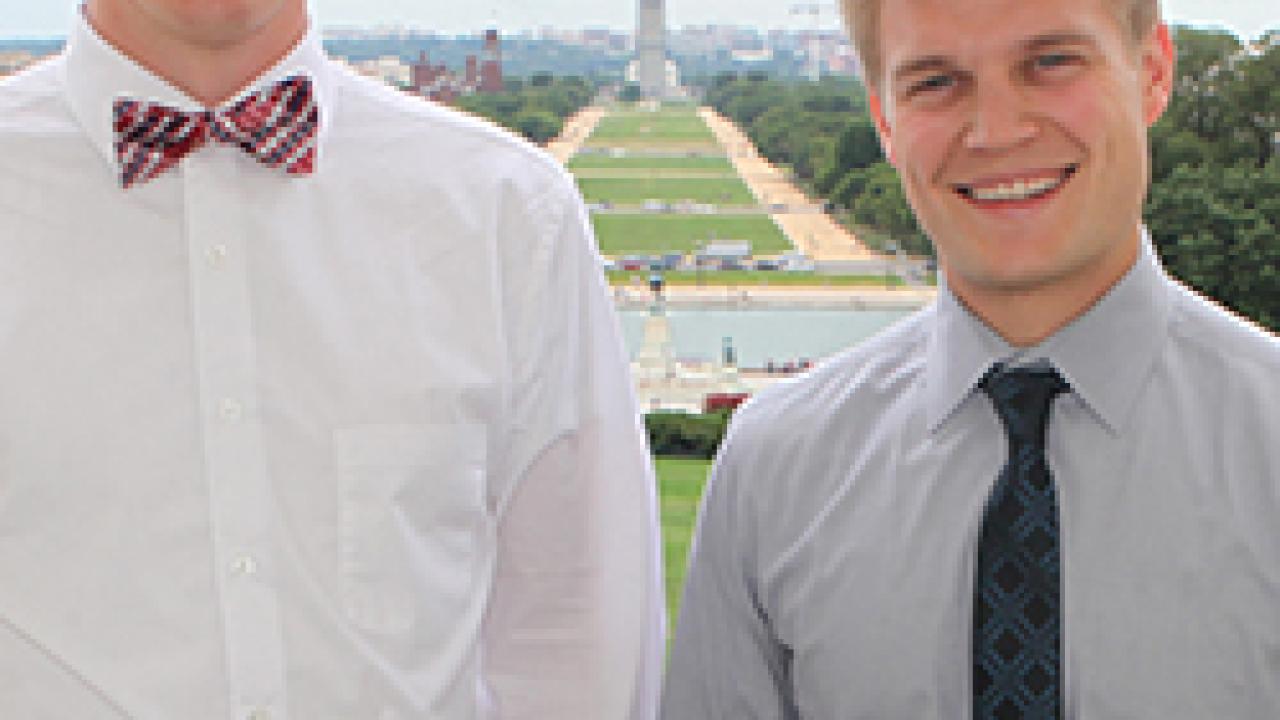 “The Augie Advantage” tagline is one that still resonates with students today. Augie Advantages can be the dining room's "Augie Bowl" (a classic dish featuring mashed potatoes, chicken and gravy), having coffee with your professors, or meeting people from all over the world on the College’s 100-acre campus. The Augie Advantage can even take two Augustana Vikings all the way to Capitol Hill.

Meet Adam Jorde ’13 (Cando, N.D.) and Jesse Fonkert ’14 (Mobridge, S.D.), both of whom are working at North Dakota At-Large Congressman Kevin Cramer’s office in Washington, D.C. — Jorde as a staff assistant, and Fonkert as a summer intern.

During their time at Augustana, Jorde and Fonkert served together in the Augustana Student Association and Augustana College Republicans. In May 2013, Jorde graduated from Augustana with majors in Business Administration and Spanish, and moved to D.C. to start his career in politics.

“One of my primary roles as staff assistant is to work in the front office and greet people when they come in for meetings,” Jorde said. “At the same time, I handle all telecommunications issues in the office and serve as an extra hand to work on constituent casework and legislative research. I also do constituent correspondence on a day-to-day basis and coordinate roles and projects for interns.”

Jorde got a head start in summer 2011, when he interned for newly elected Senator John Hoeven of North Dakota. This internship created some connections that would later help Jorde get his job in D.C.

“(That summer) I became good friends with three other interns who worked in the same office,” Jorde said. “Fast-forward two years later, when I was searching for a job, I received a phone call from one of those fellow interns who now works as communications director in Congressman Cramer’s office. After turning in a resume, I was hired less than three weeks after that original phone call.

“You never know who will provide you with your next great opportunity,” Jorde said.

This statement also applies to Fonkert, whose internship was offered to him by none other than Jorde.

Fonkert is currently a senior at Augustana with majors in Business Administration and Government/International Affairs. He also interns at First Premier Bank in Sioux Falls.

Fonkert’s internship came to be during a conversation Jorde had with his fellow staff member in July. He discovered a large gap of time when their office would be without interns.

“Knowing that interns serve a major role in our office, and that Capitol Hill internships open new doors in politics, I decided to reach out to Jesse to see if he would be interested in applying,” Jorde said. “Within 60 seconds of sending Jesse the message, ‘Want to spend a month in D.C.,’ I received the response, ‘Absolutely without any thought to it, yes!’...

“One week later, Jesse sent in his application for our office and was hired after a brief phone call with our chief of staff,” Jorde said.

“Jesse has always shown a passion for politics,” Jorde said. “From his involvement in the Augustana Student Association to his leadership in Augie’s recently revitalized student group, College Republicans, Jesse has always impressed me with his knowledge and optimism for the political field.”

Fonkert’s internship will run through late August. Interns’ duties include answering the phone, running errands, researching legislation, and attending hearings and briefings. As a result, Fonkert will get the opportunity to learn more about the legislative process and the many other functions of a congressional office.

“The first week I was here was the final week of session; everything was hectic and busy around the Capitol,” Fonkert said. “So far, I have loved every day at the office, especially during the week that Congress was in session...

“Ever since I was young, I’ve wanted to help people and be involved in organizations that make a difference,” Fonkert said. “This is a great stepping stone for my career. If I decide I want to enter this arena, I will have the experience and the connections to start.”

After graduation, Fonkert hopes to travel abroad, enter the business world, or work for the government.

As for Jorde, life in D.C. has treated him well.

“The fast-paced nature tied with the fact that most people out here are in their mid-20s makes it a great place to enter the workforce,” Jorde said. “Working in Congressman Kevin Cramer’s office has been a remarkable experience and I look forward to seeing what the future for this office entails!”