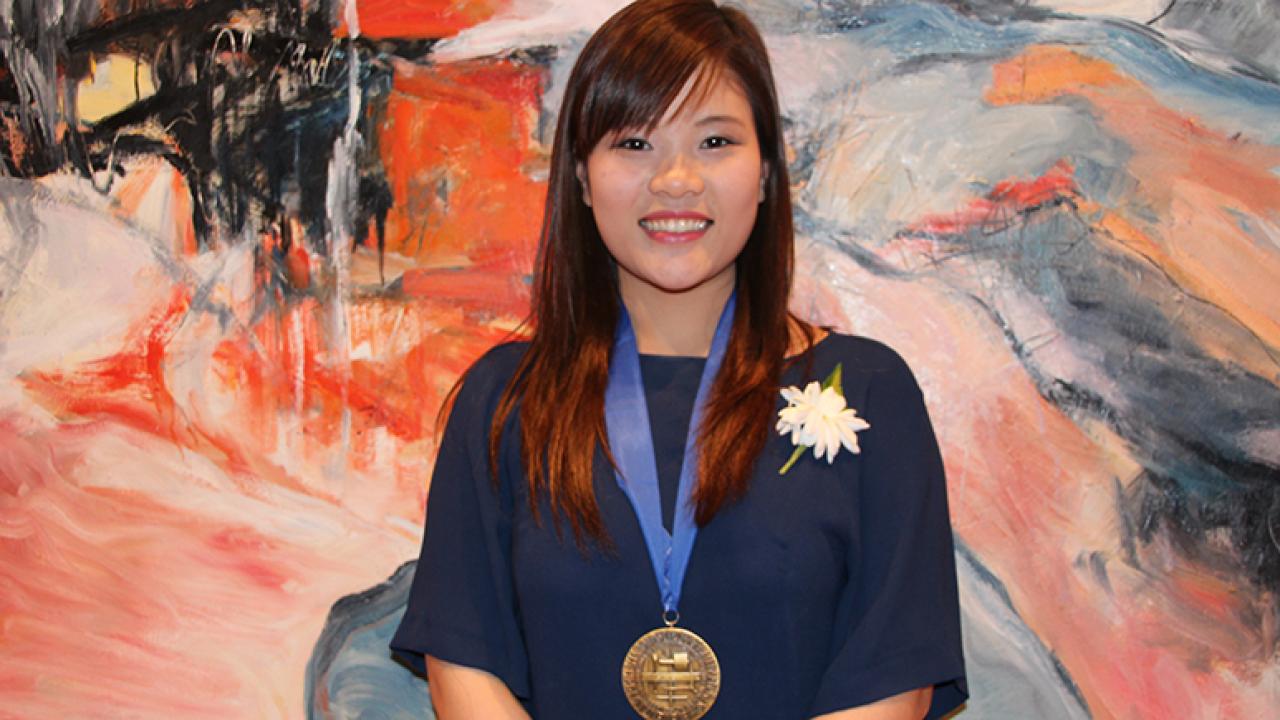 Senior art major Anh Ta, a native of Hanoi, Vietnam, has been awarded the prestigious Harold Spitznagel Medal for Achievement in Art, the highest award presented by the Augustana Art Department. Ta is only the second international student to receive the award, intended to recognize student-artists who demonstrate the highest standards of excellence in all their artistic endeavors throughout their Augustana careers. The award, which was presented earlier tonight during the opening reception for the 2014 Senior Art Show in the Eide/Dalrymple Gallery, is only bestowed occasionally and has been given only three times since 2007.

"Being an artist means being willing to take risks," said Dr. Lindsay Twa, director of the Eide/Dalrymple Gallery. "Without question, Ms.Ta has exhibited a willingness to push herself into the unknown, including the selection of her school."

Ta arrived in the U.S. from Vietnam in 2009 as a foreign exchange student and began attending Harrisburg High School, where she graduated in 2010. Before arriving in South Dakota, she had not been outside of Vietnam before or traveled on an airplane.

As Twa said, Ta braved the unknown and traveled alone, negotiating stops in Tokyo, Los Angeles and Minneapolis before arriving at the Sioux Falls Regional Airport.

After returning to the U.S. to begin her college experience and enrolling at Augustana in 2010, Ta took eight courses with Tom Shields, professor of painting and graphic design.

“When I think of how much she has learned in such a relatively short time I’m reminded of how special she is,” Shields said. “As with all exceptional students, she quickly understands concepts I’m discussing with her. She also takes constructive criticism very well.”

Her professors also note that Ta has constantly sought out opportunities outside of the art classrooms.

She studied in Germany with Scott Parsons, associate professor of art, during the January 2012 interim, where she viewed the country's many great cathedrals and had the opportunity to create a large stained glass window at the prestigious Derix Glass Studio in Tanhusstein, Germany. She has also attended summer sessions at the nationally famous Frogman’s Print Workshop, where she earned a scholarship to be a studio assistant in 2013. Recently, she also was honored with an exhibition at the Eastbank Art Gallery in Sioux Falls.

This summer she will hold a Sanford Health arts internship, where she will assist patients and their families through expressive therapy activities.

"Talent. Creativity. These are words that we always associate with artists," Twa said. "But it takes more than this to succeed as a professional artist. All the talent in the world will not carry you if you do not match it 10-fold with dedication, hard work and a willingness to push beyond what is comfortable or easy. Anh has not only the technical skills, but also personal attributes that embody what it takes to thrive as a creative artist."

“Anh’s perseverance is really something to observe,” said Shields. “I do not recall a student re-working their art as often. She has very high expectations for herself. She always has a smile even when she’s worked all night on a drawing, painting, print, or graphic design piece.”