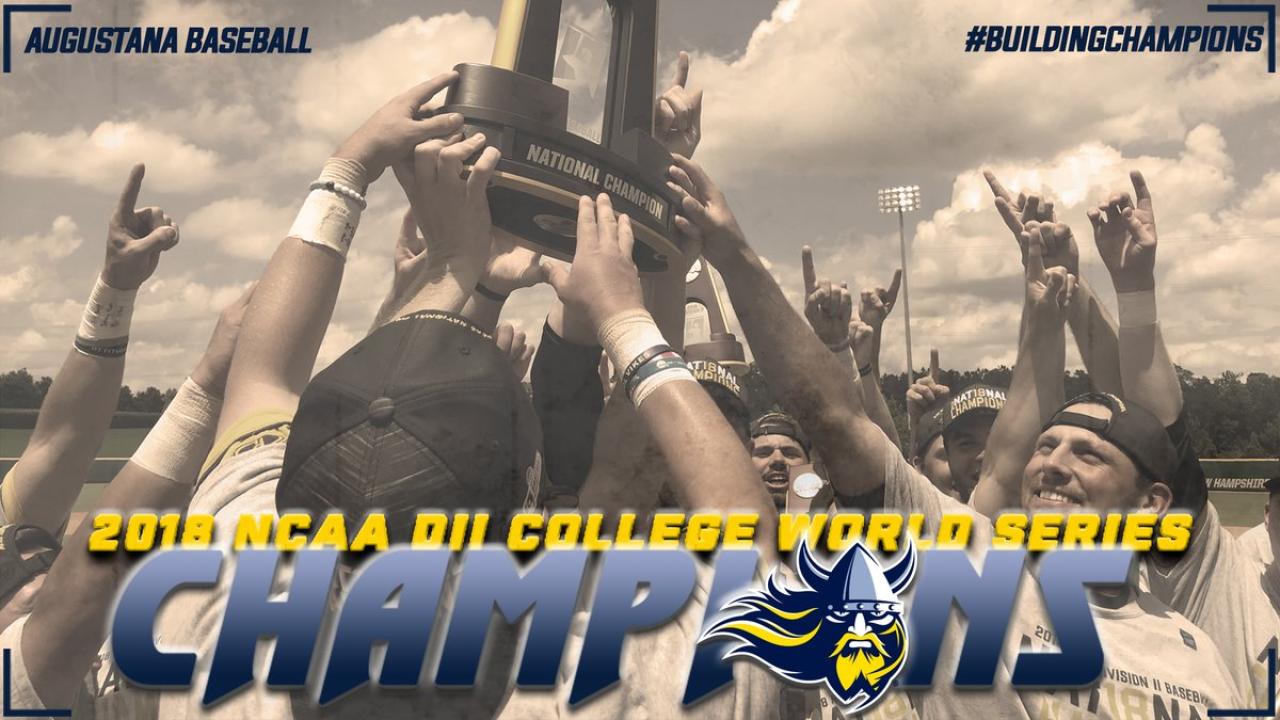 A season that reached milestone after milestone ended in a perfect way Saturday, June 2, from the NCAA Division II College World Series held at the USA Baseball National Training Complex. For the first time in program history, the Augustana Baseball team won the 2018 National Championship.

#WeAreAU
Relive the excitement in video 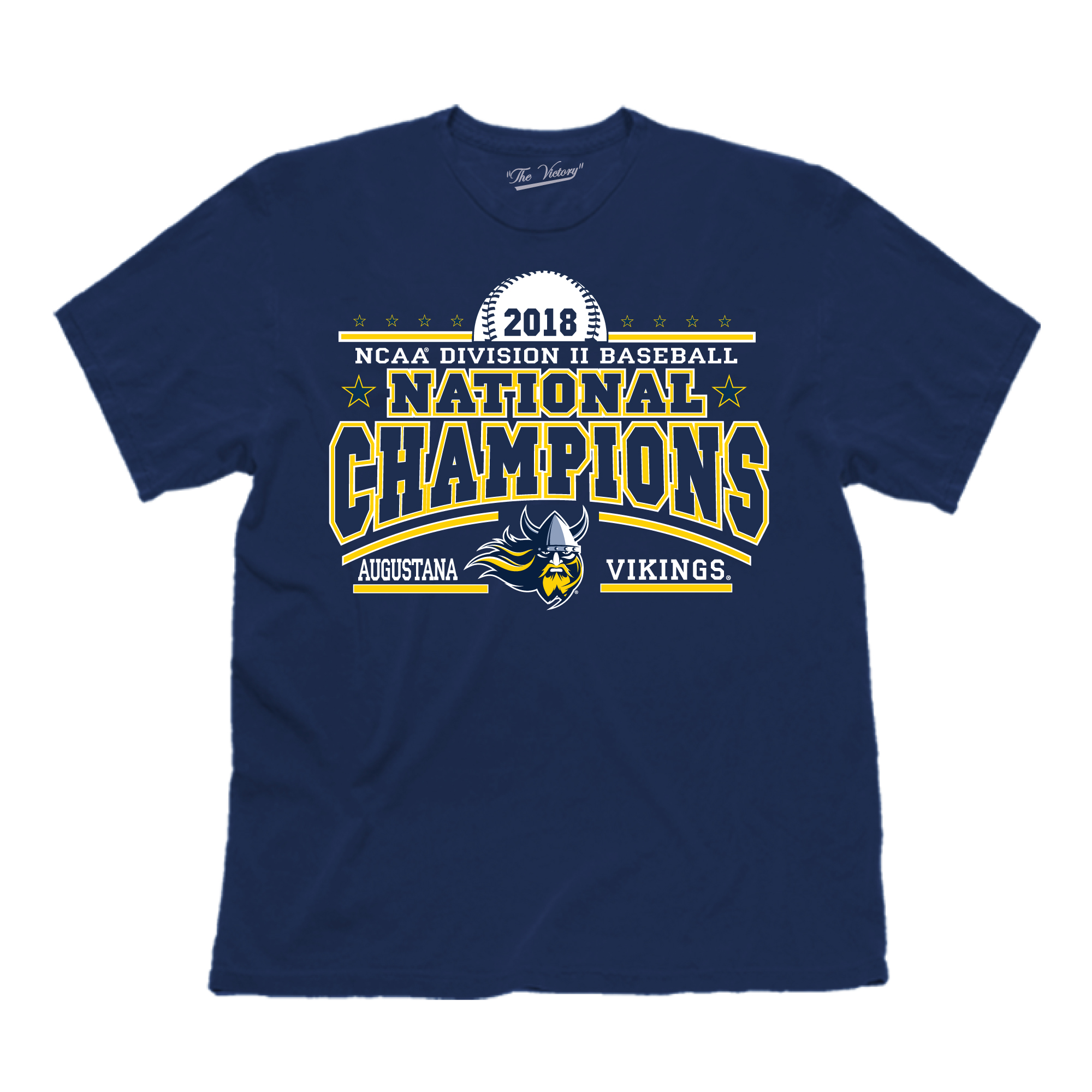 The Vikings defeated Columbus State 3-2 and completed the 2018 season with a 52-9 record, the most wins in program history.

Augustana University hosted a Celebration of Champions on Monday, June 4, at Karras Park, home of Ronken Field. An official proclamation in honor of Augustana Baseball was issued and read by Paul TenHaken, mayor of Sioux Falls.

See the official proclamation from the City of Sioux Falls.

Those who followed the Augustana Vikings baseball team this year knew they were a class act. There was no doubt they were in it to win it, while playing the game the way it’s meant to be played. Their winning philosophy: to be 1-0 each day. Their motto: ALL GAS. NO BRAKES. ALL THE WAY.

The season got off to the best start in school history, a prelude to more history in the making.

On April 25, for the first time in school history, Augustana baseball was ranked No. 1 in the NCBWA poll. They wrapped up the regular season 40-8, earning the No. 2 seed in the NSIC tournament.

After their storybook regular season, the Vikings weren’t done playing baseball — not by a long shot.

First, they took the post-season by storm, going 4-0 to win the NSIC tournament title — securing the team’s first NCAA tournament berth since 2014 and earning the second NSIC championship in program history.

Next, they claimed the Central Region title, defeating Southern Arkansas in the regional final, 6-3. The win marked Viking baseball’s first Central Region Championship in program history and punched the ticket for their first-ever trip to the DII College World Series in Cary, North Carolina.

All gas. No brakes.

Earning the No. 5 seed in the DII College World Series, the Vikings came out of the dugout strong, first knocking off No. 4 seed Southern New Hampshire 5-2 before upsetting No. 1 seed Florida Southern 6-5. Seven strong innings from ace Tyler Mitzel and a 4-RBI performance from Michael Svozil prompted the Augustana baseball team to a decisive 8-2 victory over Southern New Hampshire in the championship semifinal. The win clinched the Vikings' spot in the championship game.

More history was in the making. With ace pitcher Jacob Blank on the mound and key hits up and down the lineup, the Augustana baseball team secured their first ever Division II College World Series National Championship defeating Columbus State 3-2. Blank gave up just two runs on four hits and added 12 strikeouts in nine complete innings of work, completing his senior season with an undefeated 9-0 record.

It was a fitting end to an impossibly successful college pitching career for Blank. The Gretna, Nebraska, native did not arrive at Augustana with expectations of developing into an ace, but he leaves with a career record of 23-1. He went 10-0 with a 0.78 ERA as a junior to win national pitcher of the year, and followed it up with a 9-0 senior year. He never lost as a starter.

How did they do it?

By following their mantra: All gas. No brakes. And, with a dogged determination so strong it’s almost palpable.

“It’s a combination of things,” Head Coach Tim Huber said in an interview with the Argus Leader.

“You have to have a great University with good facilities. I like to think the guys we recruit enjoy our coaching staff and talking with them. And you’ve got to get lucky. We got lucky with guys like Mitzel, Flattery and Collison ... then you’ve got to develop that talent.”

Huber, who has led the Vikings to 10 consecutive winning seasons, told the Argus Leader that the team exceeded his expectations.

“I’ve never had a group like this; that has done what this group has done. The wins, the stats. Just guy after guy has performed.”

Among the top-performers? The Vikings’ pitching staff, which chalked up an extraordinary team ERA of 2.85, led by Blank. Also key to the pitching staff, senior right hander Mitzel, Sioux Falls Roosevelt, who struck out 10 to help the Vikings advance over Southern New Hampshire in the Series opener. Mitzel was named tournament MVP and was selected to the All-Tournament team. Also earning All-Tournament team honors were Lucas Barry, Inver Grove Heights, Minnesota; JT Mix, Farmers Branch, Texas; and Svozil, Millbrae, California.