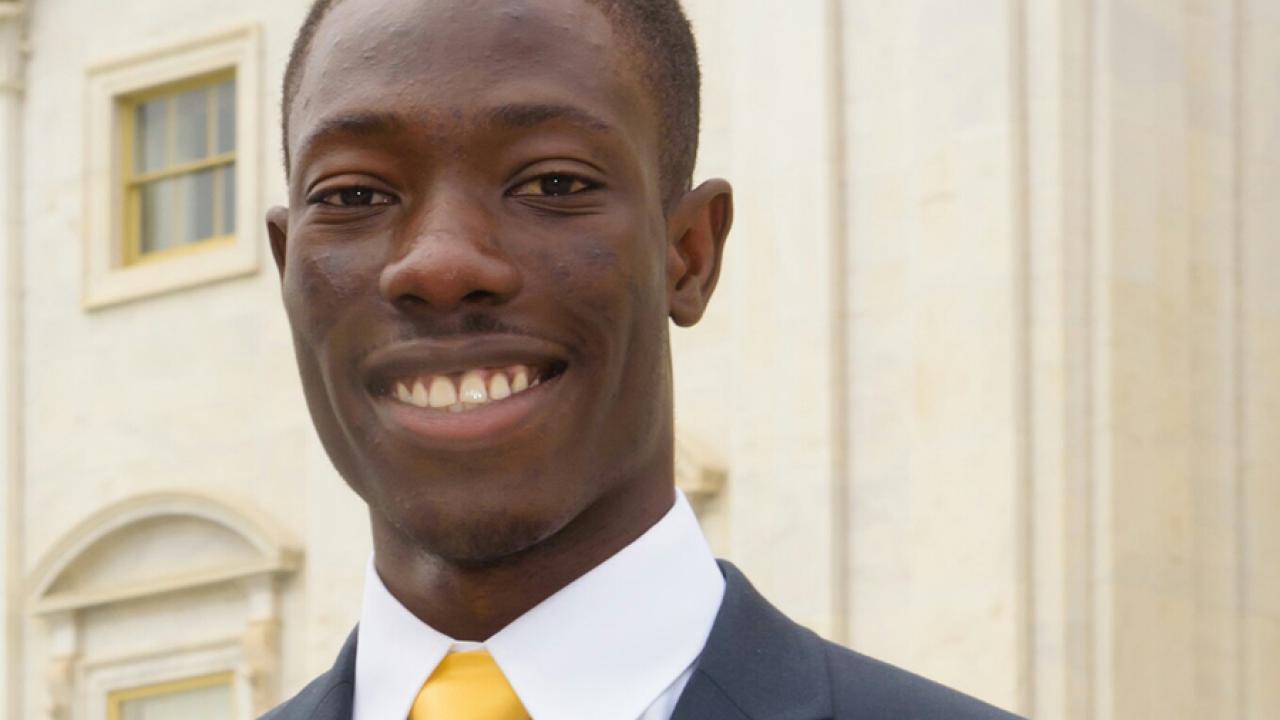 Augustana senior Kofi Gunu, a political science and economics double major from Tamale, Ghana, has been named a 2018 Schwarzman Scholar, a prestigious honor that will support his master’s degree study at Tsinghua University in Beijing, China.

Inspired by the Rhodes Scholarship, the Schwarzman Scholars program is "quickly becoming the premier training ground for future leaders, educating and preparing the world’s most exceptional men and women to confront the most difficult challenges of the coming century and develop an understanding of China necessary to lead in the future."

Scholars receive full funding, including travel costs and a personal stipend, for a year of study and cultural immersion to develop a better understanding of China. At the conclusion of the program, scholars will hold a master’s degree in one of three disciplines: public policy, economics and business or international studies.

Gunu is one of just 129 Schwarzman Scholars selected from more than 2,700 applicants from around the world. Scholars were selected, according to the Schwarzman program, "through a rigorous and thorough selection process designed to evaluate leadership experience and potential, intellectual and academic ability — including the capacity to understand emerging trends, design solutions, and inspire others to a vision, as well as strength of character." The 2018 class of scholars will be the second class since the Schwarzman program’s inception.

“I am overjoyed with the caliber of students who will make up the second class of Schwarzman Scholars. It has been truly inspiring for me to meet these people, who at such a young age have already started to make an impact on the world,” said founder Stephen Schwarzman, chairman, CEO and co-founder of Blackstone. “Clearly their journey is just beginning, but it is our hope that the Scholars of the inaugural class, the Class of 2018 and every class thereafter will leave Schwarzman College with a better understanding of how to foster friendship, cooperation and collaboration among the peoples of the world.”

Gunu said he was inspired to apply for a Schwarzman Scholarship after he read an article about founder Stephen Schwarzman when he was in high school.

“In 2013, I chanced upon an article in The Economist magazine about how Schwarzman was looking into the feasibility of [creating this scholarship program]. I read that article and thought about how cool it would be to spend four years at Augustana then to go off to China to study its politics and society,” Gunu said.

Ahead of the news about his Schwarzman Scholarship, Gunu was already well-known on campus as a student who works hard to find and maximize opportunities to learn, grow and serve.

As a child, Gunu traveled to the U.S. through a government-run youth exchange program created to reduce racial and cultural misconceptions by promoting cross-cultural interactions. He went on to attend high school in Brandon, South Dakota.

At Augustana, he’s a member of Civitas, the University’s honors program. In 2015, he was named a Peace Scholar and spent seven weeks studying peace, justice, democracy and human rights in Norway. The following fall, he formed the Augustana Peace Club. In 2016, he was named the recipient of the Covenant Award for Liberal Arts and was selected as a finalist for the Hawkinson Foundation Scholarship.

This fall, he’s spending the semester in Washington, D.C., as a member of the Lutheran College Washington Semester Program.

In Washington, he divides his time between working for the Council on Foreign Relations and U.S. Sen. Mike Rounds (R-South Dakota).

“Kofi loves learning for its own sake, but he also knows how to employ his knowledge to advance the common good.”

“The Schwarzman program is the perfect next step for him, given his interest in international relations and global leadership. At Tsinghua University, he will connect and collaborate with other young leaders on a variety of difficult issues. The network he builds and the skills he acquires during his time in China will equip him for taking a prominent role in international politics. I look forward to seeing what he will make of this great opportunity,” Johnson said.

Gunu worked with Dr. Johnson and other professors on campus to build his Schwarzman application — a rigorous endeavor that required three essays: a personal statement, an essay on leadership, and an essay on current affairs; as well as multiple letters of recommendation.

“I spent all of last summer working on those essays,” Gunu said. “Dr. Johnson and Dr. Sandra Looney (English) were so helpful to me in that process — not only to review my essays, but to also make sure I sounded like myself. Donn Grinager (international programs) and Drs. Mike Nitz (communications), Mike Mullin (history), and Joe Dondelinger (political science/government international affairs) were all helpful in the process as well.”

After submitting his application, Gunu was named one of 373 semi-finalists who were invited to in-person interviews at the Waldorf Astoria Hotel in New York City.

There, he participated in interviews with internationally known leaders including David Petraeus, former director of the CIA, and Cathy Engelbert, CEO of Deloitte.

Gunu said he feels honored to have been named a Schwarzman Scholar and is excited for the opportunity to study in China.

“I think it’s just such a well-structured program to expose students to the politics and society of China,” he said. “China is a really intriguing place to me. It is poised to become the largest economy in the world and there are so many political and economic changes happening.

“China is also fast becoming a critical player on the African continent. Growing up in Ghana, I saw how active China was in some infrastructural projects close to where I was living. I want to learn more about that involvement and hopefully shape it to produce sustainable development in Africa.”

After his time in China, Gunu said he’s interested in building a career with an international organization.

“I’m very interested in working on development issues around the world. I’d love the opportunity to work for an organization like the United Nations or one of its agencies like the World Health Organization.”