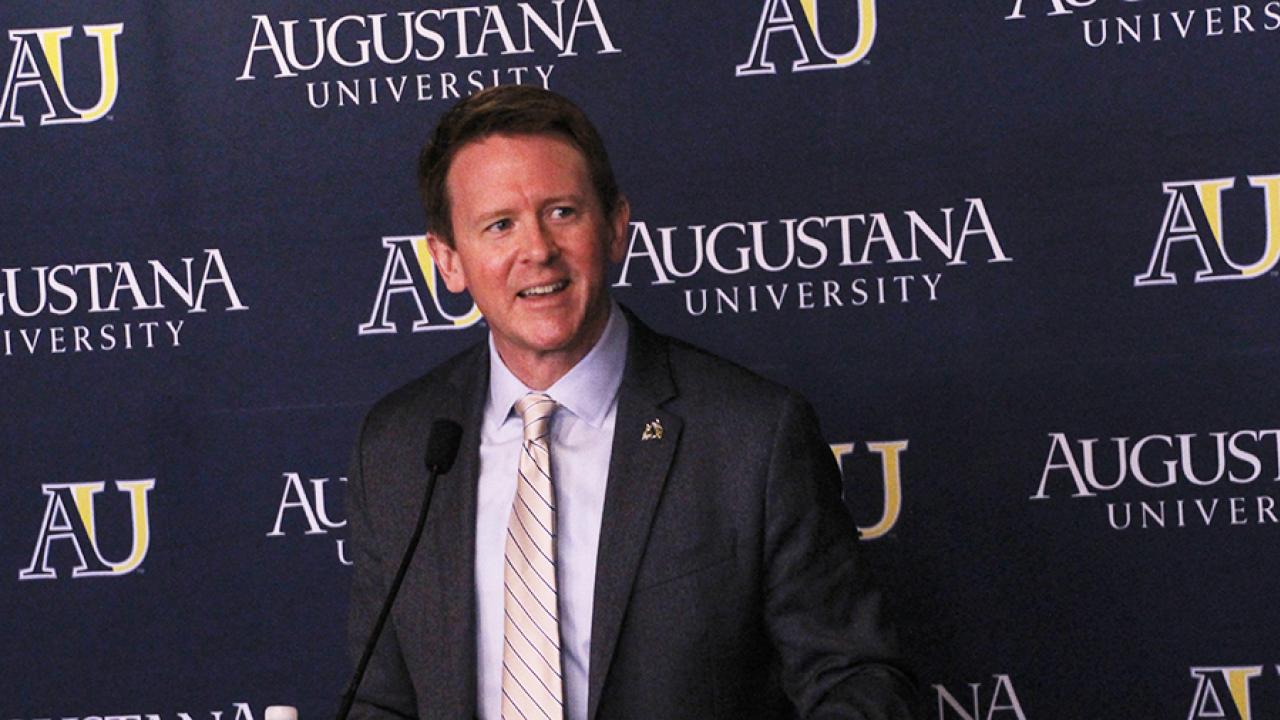 Josh Morton has been named Director of Athletics for Augustana University.

Morton, who most recently served as an assistant athletics director for Michigan State University, was introduced by Augustana University President Stephanie Herseth Sandlin at a news conference on Friday, April 6.

Watch
Watch a replay of the news conference

“Josh Morton already has the spirit of a Viking,” said Herseth Sandlin. “From serving as a walk-on quarterback for one of the University of North Dakota’s conference championship teams, to leading an award-winning television sports department for a major ABC affiliate, to, most recently, helping Michigan State build unprecedented support for its student-athletes, Josh has spent his career building pathways to help the teams he serves succeed.

“His passion for creating exceptional student-athlete experiences, his extensive leadership and communication skills, his proven experience in athletic fundraising and budget management, and his desire to make a difference in the lives of others make Josh Morton the perfect choice to serve in this very important role."

Morton succeeds Slade Larscheid, who stepped down earlier this year to spend more time with his family.

Morton said Augustana's reputation for excellence, its culture and its people drew him to the role.

"I'm excited for the chance to join an outstanding institution revered for its academic excellence, its core values, its commitment to research and discovery, its vibrant performing and visual arts programs and, without a doubt, its best-in-class athletic programs," he said. "I'm looking forward to being a part of this campus community during this extraordinary time in Augustana’s storied history, and to create a home in the great city of Sioux Falls with my family."

At the news conference, Morton discussed the three principles his leadership philosophy will focus on: the student-athlete experience, engaging with the Augustana community and winning with integrity.

"The student-athlete experience is about all aspects of our students' lives — academically, in the community socially, in competition and (preparing them for their) careers," he said. He went on to explain his desire to build and foster relationships with members of the Augustana community who are on campus, as well as Viking alumni and fans around the world.

Josh Morton has more than a decade of experience working in college athletics.

At Michigan State, he worked with alumni in Michigan and metropolitan areas of the western U.S. to build financial support for MSU athletics, capital projects, endowments and programmatic gifts, securing more than $23 million in major gift commitments in less than five years.

He is an active member of the National Association of Athletics Development Directors (NAADD).

Prior to MSU, he served as an associate athletics director for the University of North Dakota where he was the liaison between the University and the architectural firm behind the UND High Performance Center. From 2009-2012, Morton secured more than $22 million in annual, major and planned gifts for UND athletics.

Before beginning his career in college athletics, he served as the sports director and sports anchor for WCIV-TV, the ABC affiliate in Charleston, South Carolina.

Born in Sioux Falls, Morton holds a bachelor’s degree from the University of North Dakota. He and his wife, Robin, are parents to Luke, Cale and Sara Jane.

Morton will begin his new role in early May.