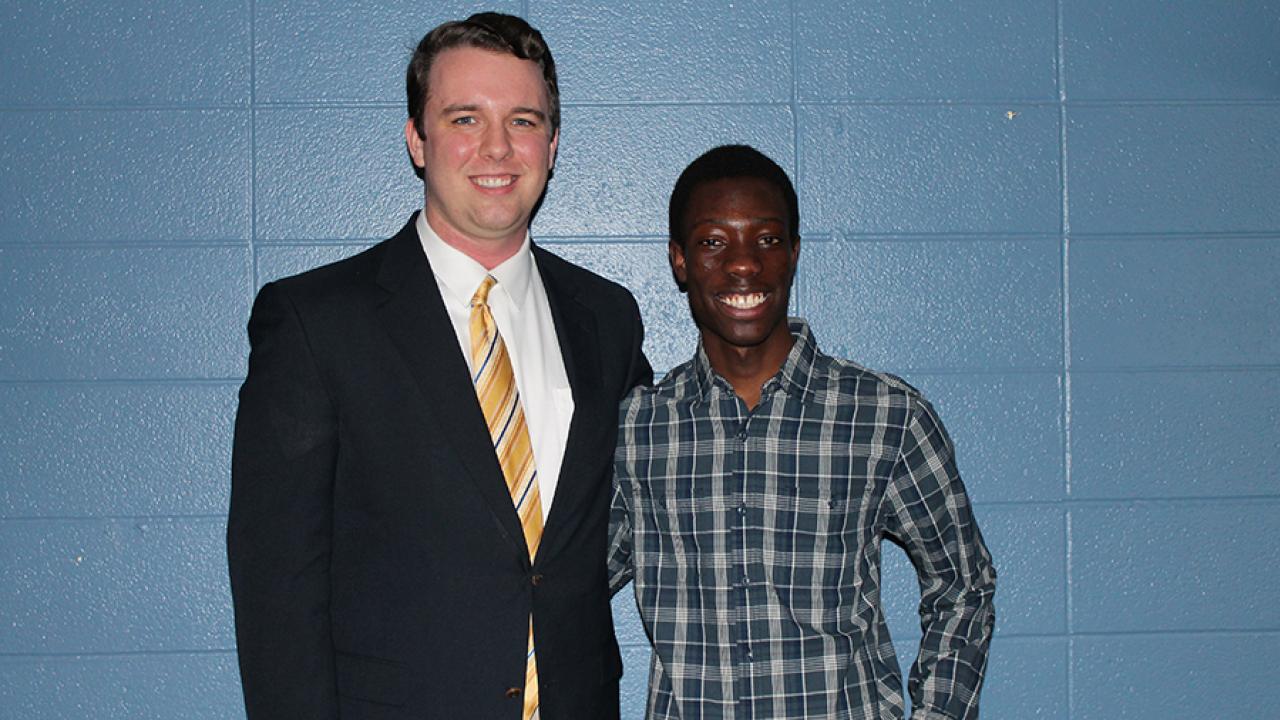 As Peace Scholars, Einertson and Gunu will embark on a seven-week academic experience in Norway designed to deepen their understanding of the central issues and theories related to peace, justice, democracy and human rights. The two will study at the Nansen Dialogue Network in Lillehammer and at the University of Oslo International Summer School June 15 - Aug. 1.

Junior Sarah Kocher (Lincoln, Nebraska) was named as the College’s alternate. She will serve as Augustana’s Peace Scholar if either Einertson or Gunu are unable to participate.

Einertson,a member of the Civitas Honors Program, is majoring in modern foreign languages and vocal music with a sacred music emphasis and minoring in German and ancient languages. He is a member of The Augustana Choir holding the position of bass section leader since 2013. Einertson also participates in the Augustana Orchestra as the principal string bass chair since 2013.

“He achieves excellence in every aspect of his life. His warmth, good humor, thoughtfulness, sociability, and determination to excel make him an ideal student to represent Augie abroad,” a recommendation letter said of Einertson.

Gunu, also a member of Civitas, is a government/international affairs and economics double major. He serves as a Viking Guide to first-year students and is secretary of the Committee of Undergraduate Political Scientists (C.O.U.P.S.) club.

“Kofi is one of the finest minds I have had the pleasure to teach ... His performance in and out of the classroom can clearly be described as exceptional,” a recommendation letter said of Gunu.

Einertson and Gunu will be introduced at the 2015 Nobel Peace Prize Forum, set for March 6-8 at the Radisson Blu in downtown Minneapolis. The theme for the 2015 Forum is “Inclusive and Sustainable Peacemaking and Peace Building.”

During the announcement, Augustana president Rob Oliver recognized each of the five Peace Scholar finalists, who, in addition to the three students listed above, also include:

As Peace Scholars, Einertson and Gunu will embark on coursework that will include the causes of armed conflicts, peace building, peacemaking, humanitarian interventions and aid, peacekeeping operations, gender, civil society and nonviolence and peace movements.

The scholars will also visit a number of influential institutions including The International Peace Research Institute, Oslo (PRIO), Nobel Institute, Oslo Center for Peace and Human Rights and the Nobel Peace Center.

Upon returning to their respective campuses, the 10 scholars will continue to communicate and find ways to build on their Oslo experiences together. They will also be expected to play leadership roles in peace activities on their campuses, and assist with next year’s Nobel Peace Prize Forum.