Michigan State University (MSU) researchers and Augustana University professor Dr. Andrew Klose, assistant professor of chemistry, and Augustana students Cody Kujawa '19 and Skyy Pineda '18, have measured for the first time the nuclei of three proton-rich calcium isotopes, according to a new paper published in Nature Physics. As a monthly journal, Nature Physics publishes the highest-quality research in all areas of physics, pure and applied.

One of the most fundamental properties of the nucleus is its size. The nuclear radius generally increases with the number of proton and neutron constituents. However, when examined closely, the radii vary in unique ways, reflecting the intricate behavior of protons and neutrons inside the nucleus.

Of particular interest is the variation of the charge radii of calcium isotopes. They exhibit a peculiar behavior with calcium-48 having almost the same radius as calcium-40, a local maximum at calcium-44, a distinct odd-even zigzag pattern, and a very large radius for calcium-52. Although the pattern has been partially explained (gray line in the figure), many existing theories struggle to explain this behavior. Below the lightest stable calcium-40 isotope, the charge radius has been known only for calcium-39, due to the difficulty in producing proton-rich calcium nuclei. 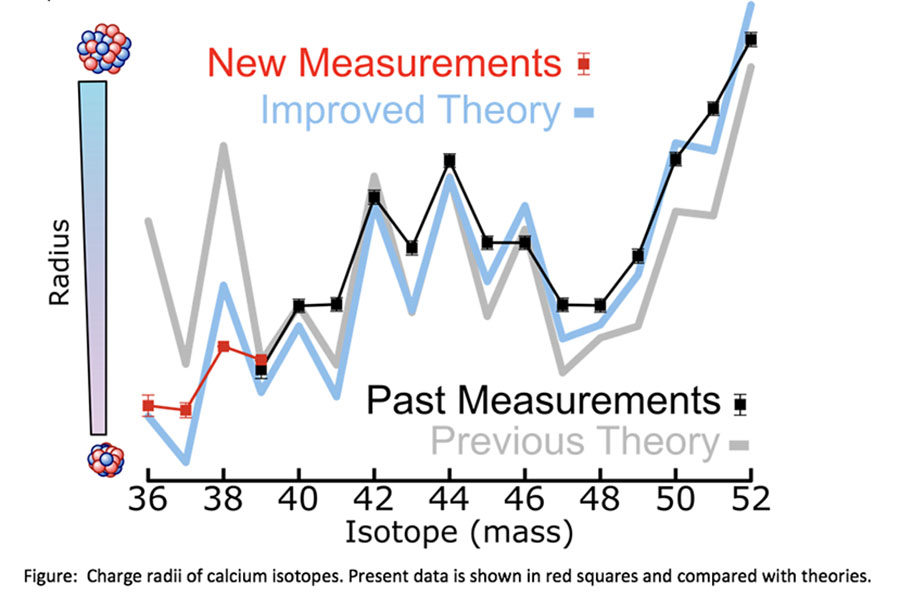 The radius of a calcium nucleus is small, about 0.0000000000000035 meters (or 3.5 femtometers), and the local variation is 200 times smaller still. Moreover, the proton-rich calcium isotopes are rather short-lived. For example, calcium-36 exists for just one tenth of a second. The tiny changes in charge radii of very short-lived isotopes can be measured using the laser spectroscopy technique developed at the BEam COoler and LAser spectroscopy, BECOLA, facility at the National Superconducting Cyclotron Laboratory at Michigan State University.

The research, led by Andrew Miller, NSCL graduate assistant, measured for the first time (red squares in figure) the charge radii of three proton-rich calcium isotopes (with mass numbers A=36, 37, 38). These were found to be much smaller than previous theoretical predictions and present a new puzzle. However, an improved theoretical model with a focus on these present data remarkably reproduces the general trend of radii from calcium-36 all the way to calcium-52 (blue line in figure). This success can be attributed to a better understanding of the peculiar ways in which protons interact with each other at large distances outside the surface of a proton-rich calcium nucleus. The improved understanding of charge radii will impact further developments of a global model of the atomic nucleus.

The laser spectroscopy experiment at BECOLA and the improved nuclear model will play an even more essential role in the determination and interpretation of radii of nuclei at the Facility for Rare Isotope Beams currently under construction at MSU, which will provide unprecedented access to new rare isotopes.