Off the eastern coast of Africa, across the Mozambique Channel, Madagascar is Earth’s fourth largest island. On its eastern bank, nestled in a broad valley that once housed a magnificent rainforest, lies the village of Moramanga. Its rural landscape is subtly interrupted by the national highway — a two-lane road leading travelers around hairpin turns down to the serene coast of the Indian Ocean to the East.

“Half of what Peace Corps does is cultural,” said Dr. Lon Kightlinger ‘77, who received his undergraduate degrees in biology and chemistry at Augustana. “They want American people rubbing shoulders with local people in Madagascar and in all other countries they serve.”

The volunteers live with the local population, sharing in the local cuisine and customs, as well as the local diseases, including the Bubonic Plague and a recent measles outbreak that killed almost 1,000 children.

Past Work in Madagascar

It is summer in Madagascar, a far cry from the snow-covered bluffs of Pierre that Dr. Kightlinger called home for the past 20 years as South Dakota’s State Epidemiologist. And yet, the ex-rainforests of Madagascar are familiar to him also. He finds the Malagasy language has come back to him more easily than he thought it would, given he first learned it in his 20s. 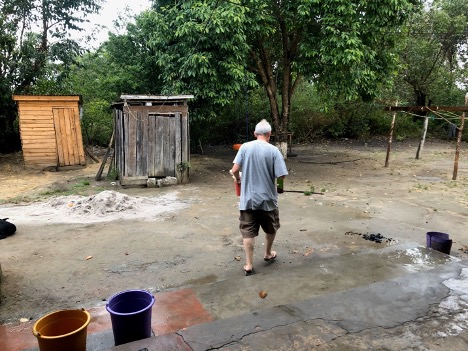 Shortly after graduation from Augustana, Kightlinger ventured to Madagascar for what he thought would be a couple of years working for the Malagasy Lutheran Church’s health network. He stayed for 20 years, five of them with the Ranomafana Project, now a large national park. In the late 1990s, Kightlinger was part of an innovative collaboration between the Lutheran Church and the Muslim Kingdoms of North Madagascar to address public health concerns.

Kightlinger never planned to live in Madagascar again. Although he had history there (including the birth of his son, Andrew, also an Augustana graduate), he wanted to live somewhere new.

“I thought I would go to Mongolia,” he said.

But when he began talking to Peace Corps recruiters, it made the most sense to come back to Madagascar.

Kightlinger joined a group of mostly recent college graduates, just as he had been when he first came to Madagascar.

A Winding Path to Public Health

After graduating from high school in Selby, Dr. Kightlinger was drafted into the U.S. Army, where he served as a medic.

“I was more serious, more grown up I think because of that. I was more purposeful. I had experienced a lot and been in a more diverse community.”

Augustana was the perfect fit for his ambitions. After exploring eastern Africa on a J-term excursion, Kightlinger wanted to return to Tanzania or Kenya after graduation, but instead found an opportunity in Madagascar, where he decided to go into public health.

“I worked in a rural hospital where people were very, very poor,” he recalled. “Their kids were full of worms, malaria, malnourished. They’d come in and get fixed up a little bit, then come back in three months with worms again. There was no prevention. It made me so sad because kids were living with a belly full of worms, all these parasites draining their vitality from them for things that were so preventable.”

It was 1978 when smallpox was declared eradicated from the world.

“It was a very clear call - we can conquer these diseases. When I started my career, polio was still ravaging the world, especially here in Madagascar. It didn’t make sense to me that we were spending so much money on the curative and the rehabilitative end of it when we should have been working on the prevention end of it. To me, you didn’t have to get malaria. You didn’t have to get polio.”

Kightlinger, who earned his Master of Science in Public Health (MSPH) from Tulane University and Ph.D. from the University of North Carolina, hopes other science-minded students see the value of going into public health.

“Everyone wants to go to medical school,” he said. “People don’t realize there’s also public health. That’s where the action is. There are so many big opportunities. It’s so diverse.”

Throughout his 20 years in Pierre, Dr. Kightlinger made significant contributions to public health, particularly in the fight against West Nile. He understood mosquitoes from his past work with malaria. As a result of his efforts, more than 200 South Dakota communities now have their own mosquito control programs.

Another focus for his time as state epidemiologist was improving South Dakota’s infant mortality rate, which has carried over into his work in Madagascar.

“The lessons I learned in South Dakota are very much applicable. These aren’t just South Dakota things or United States things, these are universal things.”

While the problems are universal, differences in culture create unique challenges.

“In South Dakota, we had a lot of SIDS (sudden infant death syndrome) deaths with babies sleeping on their tummies or being rolled over by their parents. [Safe sleep] is a message I brought to Madagascar. That’s a message that hasn’t penetrated at all because everybody sleeps with their baby when they’re very young.”

At the health center, he educates mothers and pregnant women about proper childcare, including breastfeeding, vaccinations, and general hygiene. He even led the charge to update the maternity ward, including bringing running water to the clinic with funds from the United States Agency for International Development (USAID). 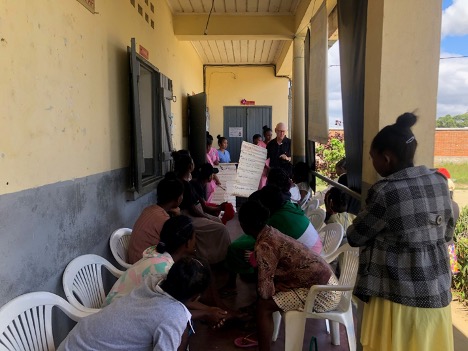 One message that resonates well with the Malagasy people is the benefit of breastfeeding.

“Breastfeeding is the universal pastime,” Kightlinger mused. “There is no shyness about breastfeeding. We could learn a lot from the people of Madagascar just on that kind of thing.”

That is not the only lesson Americans could learn from the Malagasy.

“In the United States, we go home, we close the door, we watch TV or turn on the computer,” he said. “People here [in Madagascar] know how to live their life. Here it’s friendship and community and family and relationships. People actually live their lives where you can see it.”

Houses are small, (Kightlinger’s is only 100 square feet), and used mostly for sleeping.

“People sit out in front. You raise your kids in front of your house. It’s more human over here. It’s not machine operated.”

Reflecting on a Successful Career

Dr. Kightlinger looks forward to returning to Pierre when his Peace Corps tenure is complete this spring.

“I’m a prairie person. I was born on the prairie, and other than my Madagascar years, it’s been South Dakota. I love the horizons, I love the sky, and the stars. Everyday it’s a beautiful sunset.”

But don’t expect to find him home every day. He still intends to travel as much as he can.

When Kightlinger reflects on his career in public health, he sees a greater hand at work.

“I really feel there is a call from God in it. You can write down on a piece of paper what are the pros and cons of it – no electricity, malaria, plague. You really can’t come to an intellectual choice,” he said. “It’s more from the heart, and you have the peace of God with you that despite everything, you just have this peace about it.”

“You don’t just go into your education to get a job in whatever the hot field is. You have to find it within yourself to take on these challenges. You need vocation because you’re not in it for the money or the prestige. You are in it because you really want to serve people.”

And if you are not sure what your vocation is yet, don’t wait around.

Kightlinger will join a free webinar for the Augustana Community on Wednesday, April 15 at 7 p.m. CST. Registration is required.