The celebration of Augustana's 100 years in Sioux Falls inspired the creation of Augieopoly, the fast-dealing property trading game with a Viking twist.

The Augieopoly board game brings a trip down memory lane for Augustana alumni, students, and friends. This completely custom edition game features all things Augustana — including the game board, the properties, the money, the “Pass/Fail” and “Augie Advantage” cards, the custom pewter game tokens of the Ole statue, Augie Doggie, Dr. Lynwood Oyos’ Norwegian sweater and more!

Players can relive the best four years of their lives as they travel around the board and compete to own it all. There’s even a special “Augie Advantage” for alumni players!

Augieopoly is a special edition customized board game celebrating all things Augustana. Designed by an alumna, the game highlights historically significant moments in the story of the University, as well as legends and memories held dear by Vikings everywhere.

Cards: Risk passing or failing with the "Pass/Fail" cards and be reassured you're going to gain something when you select from the "Augie Advantage" deck. Interested in the stories and historical details behind the cards?

Money: Featuring some of Augie's most influential presidents, even the Augieopoly money has a viking theme. (And, for alumni, there's an added bonus in your pocket at the start of the game!)

Properties include: Old Main, Solberg and Bergsaker Hall, the Chapel, the Elmen Center and the rest of campus, too!

Depots: Known as "the College on wheels," Augustana's journey is marked by the places it stopped along the way. From its christening in the basement of the Norwegian Lutheran Church on Franklin Street in Chicago, IL, in 1860 (Start), to it's stops in Paxton, IL (Depot #1); Marshall, WI; Beloit, IA (Depot #2); and Canton, SD (Depot #3); Augustana found its permanent home on Summit Avenue in Sioux Falls (Depot #4) in 1918. According to the Sioux Valley News at the time, the last move from Canton to Sioux Falls was hard-fought and encouraged by local business leaders who saw the value of having an institution of higher learning in the city.

Game Board: In addition to the properties and depots, the center of the Augieopoly game board is chock-full of historical information, imagery and memories. From the buttons to the barracks, there is something for everyone! 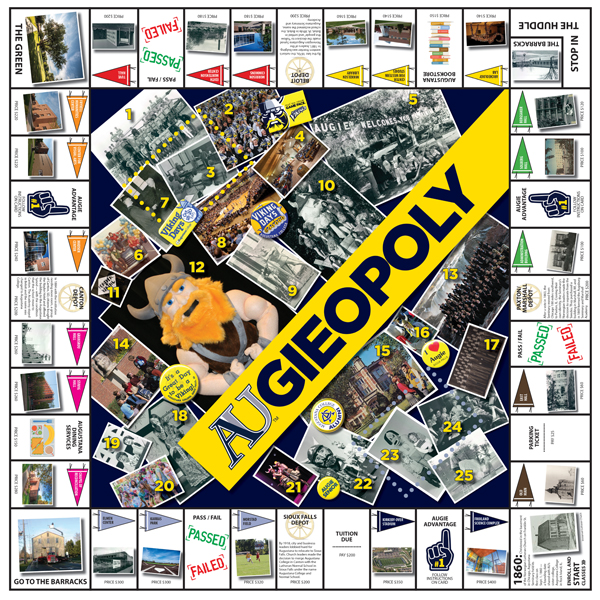 Here, each photo is numbered with a detailed caption below:

1. Members of the Webstarian Society (circa 1970), also known as the W.E.B.S. or the Wednesday Evening Bible Study, were a lively group of young men who brought great energy to the campus. The WEBS were one of many societies present on campus from the 50's to the 70's.

2. Fans celebrate the game and the unveiling of the new Viking logo in 2008.

3. Faculty like Dr. J. Earl and Clara Lee, pictured here teaching in the Administration Building in the late 1950s, are just a few of the legendary names students remember from their time in class at Augustana.

5. The Viking Days committee dons Norwegian sweater and blows the viking horn to welcome alumni to campus. (Circa 1960)

9. Before Ole the Viking stood guard over the quad, Augie students constructed a viking statue each year as part of the homecoming festivities. This picure is from 1950 and shows one of the students painting the Ole statue to preside over Viking Days that year.

10. "Ole's Girls" are ready to cheer on our beloved Vikings from high atop the squatty bod viking statue (1972). The Ole the Viking statue was designed by Peter Eide '66 and has kept watch over the Augustana campus since 1967. Eide's design was chosen from seven entries in a 1966 competition and first dedicated during Viking Days 1967. It was re-dedicated during Viking Days in 2011.

11. A newer tradition among Augie grads is to decorate your graduation cap. It's just another example of the way our students let their personality and creativity shine in every occasion.

13. The Augustana Band, under the direction of Dr. Bruce Ammann, poses on the rocks of Falls Park in downtown Sioux Falls before their international tour to China. (Circa 2003)

14. Dr. Sandra Looney '62 greets students gathered near 'the owls' statue. The sculpture, commissioned for the 125th anniversary celebration, was created in 1985 by art professors Palmer Eide and Ogden Dalrymple. It is entitled "Hindsight, Insight, and Foresight" and was intentionally placed next to the Commons in the center of the campus to encourage us to ponder the greater purpose of a college education.

15. Postcard from the 1950s featuring students (one wearing an Augustana letterman's jacket) outside of the Administration Building.

16. Viking Kira (Christenson) Dylla '04 gives a rival mascot some grief during a football game at Howard Wood Field. (Circa 2002)

19. The Augustana Student Association (ASA) convention and election was held in the Old Gym during the '70s and '80's. Pictured on the game board are ASA president, Dave Jarratt and vice president, Dave Ahrendt (1977).

23. Augie Doggie, a late 1980 addition to the men's basketball team, was the creation of then coaches John Thomas and Bill Gross and junior Tim Line. Diana Borgum, wife of Augustana's Sports Information Director at the time, Larry Borgum, made the costume.

24. First lady Cora Stavig hosts Augustana students for tea in her home. (Circa 1964)

25. Palmer Eide and Ogden Dalrymple carve 'The Muse,' which now sits outside the Center for Visual Arts.

Pictured on the Augieopoly money are some of Augustana's presidents who served during or represent significant milestones in the University's history.

To date, Augustana has had 24 presidents.

View a full list of notable events in Augustana's history.