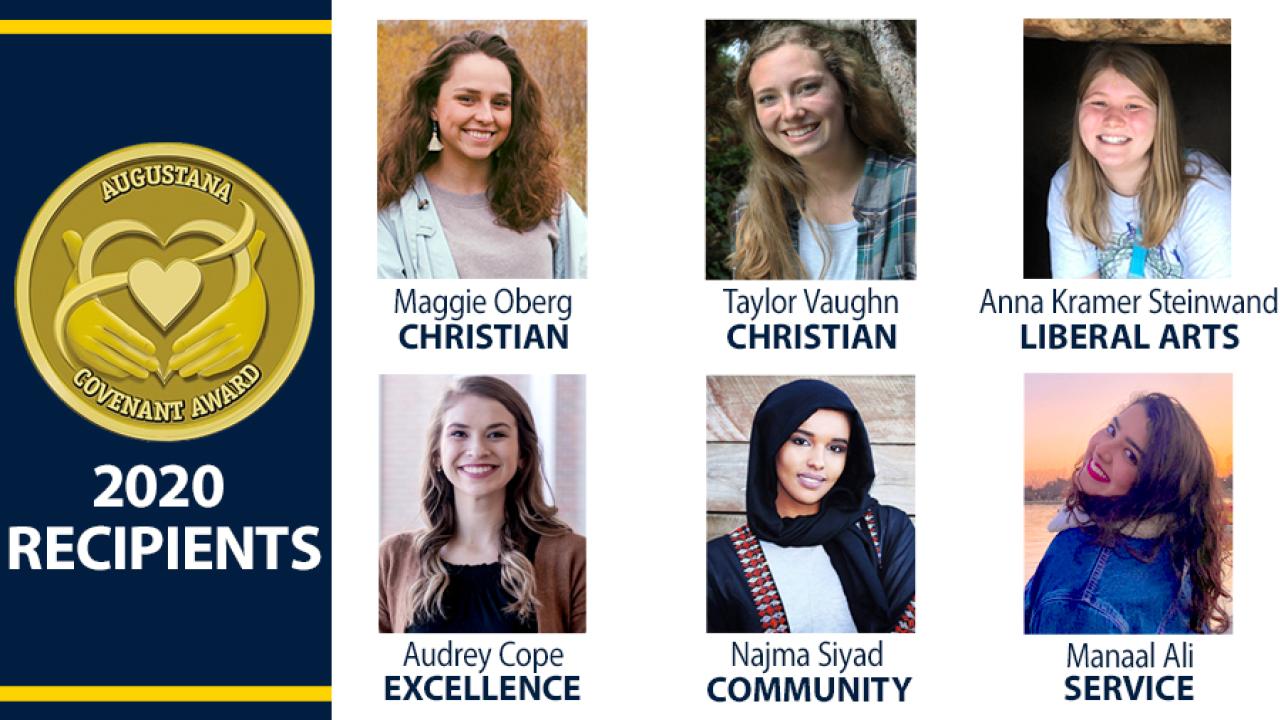 Six students received the 2020 Covenant Award in a virtual ceremony held on the evening of Friday, April 17, recognized for their exemplary commitment to the core values at Augustana University. The ceremony is part of Verdier 2020, a week-long celebration of the core values that serve as the foundation for Augustana’s academic and student life programs.

A significant tradition at Augustana, the Covenant Awards are named in honor of each of the university’s five core values: Christian, Liberal Arts, Excellence, Community and Service. A committee of faculty and staff review nominations from the entire campus community.

The recipients are selected by a committee of faculty and staff that seeks nominations from all members of the Augustana University community. Covenant Awardees receive a cast bronze medallion as recognition for this distinction. Graduating recipients will wear the medallion as part of their academic attire during their Commencement festivities.

The 2020 Covenant Award recipients are:

Nominees for the Covenant Award for Christian Faith are those who, during their time at Augustana, have searched for a calling that honors the Christian Faith; who actively integrate faith and actions; who see their life journey as part of a bigger tapestry; who are growing in faith; and who are comfortable discussing their faith with others.

“Together they have been hosting a podcast titled Doormat Theology since April 2019,” said the person who nominated them. “They have been more and more willing to share personal stories and experiences that are hard to share, emotional and yet so helpful to them and to those who hear their story. They have each grown in their desire to serve others and to sacrifice for others. They do this through their unique personalities; Maggie has a wonderful gift of paying attention to others, seeking to get to know their individual needs, wanting to find a gift that will fit a person in a way that truly lifts their spirit. Taylor has a wonderful gift of feeling what others feel.”

Anna Kramer Steinwand is a senior from Moorhead, Minnesota. She is majoring in business administration, economics, government and international affairs, as well as Spanish.

“She didn't need four majors, but her intellectual curiosity drew her to each of these. In addition, she has been working at the Writing Center for the past two years, while also working at a local law firm. She is simply the most motivated and determined student I have ever seen,” said the person who nominated Steinwand.

Audrey Cope is a junior from Rapid City, South Dakota. Cope is majoring in government and international affairs and French with a minor in political philosophy.

“She doesn't just want good grades; she wants to be a great student — in the classroom and in life. Her learning, however, is more than just theoretical. This is where her true excellence lies. The genuine connections she made with those unlike her allowed her to hear and understand their realities and experiences,” said her nominator.

“She did not imagine herself leading the student body, but when the opportunity arose, she was bound by duty, and she executed the role with excellence. When the moment demands, South Dakota will call on her to serve in public office, and I know she will answer the call with the excellence she has always exhibited.”

Najma Siyad is a senior from St. Paul, Minnesota. She is studying philosophy and communications studies. Siyad became a U.S. Citizen in January 2020.

The person who nominated Siyad says she continues to show up in public places to lead others.

“Najma is a woman who takes her own faith seriously, and in so doing, she takes others' faiths seriously. She is devout in her commitment to Islam, and she expresses that devotion in a way that honors others' faith.”

The nominator said, “I can imagine Najma going to graduate school, becoming a teacher, becoming a political leader, becoming a leader in business, or in many other ways becoming a significant voice in shaping her community for the better. I'm proud to know her.”

Manaal Ali is a senior from Sioux Falls. Her majors are sociology and government and international affairs with a minor in biology.

According to the person who nominated her, “Manaal saw a need in the Augustana community and worked tirelessly to remedy it; not for her own glory, but for the good of the community. In this way, she serves as an inspiration to Augustana students, a reminder that one does not need to leave Augustana to begin serving others.”

The nominator said Ali's work in advocacy programs has inspired her to work in a foreign policy non-profit before pursuing further education.

“It is clear that Manaal has chosen to make her commitment to serving others into her life's work. Such devotion is at the core of Augustana's motto encouraging students to: Enter to learn, leave to serve.”

History of the Covenant Award

During the 2000-01 academic year, members of the Augustana Student Association (ASA) convened to give further definition to the university's Shared Core Values. Their goal was to define more clearly what it means to be a responsible member of this college community.

This open and inclusive process produced the Augustana Covenant, a living document designed to inspire and guide Augustana University students.

The Augustana Student Association's hope is that every student will become familiar with this Covenant as a context to understand more completely the rights and responsibilities that accompany membership in our campus community.