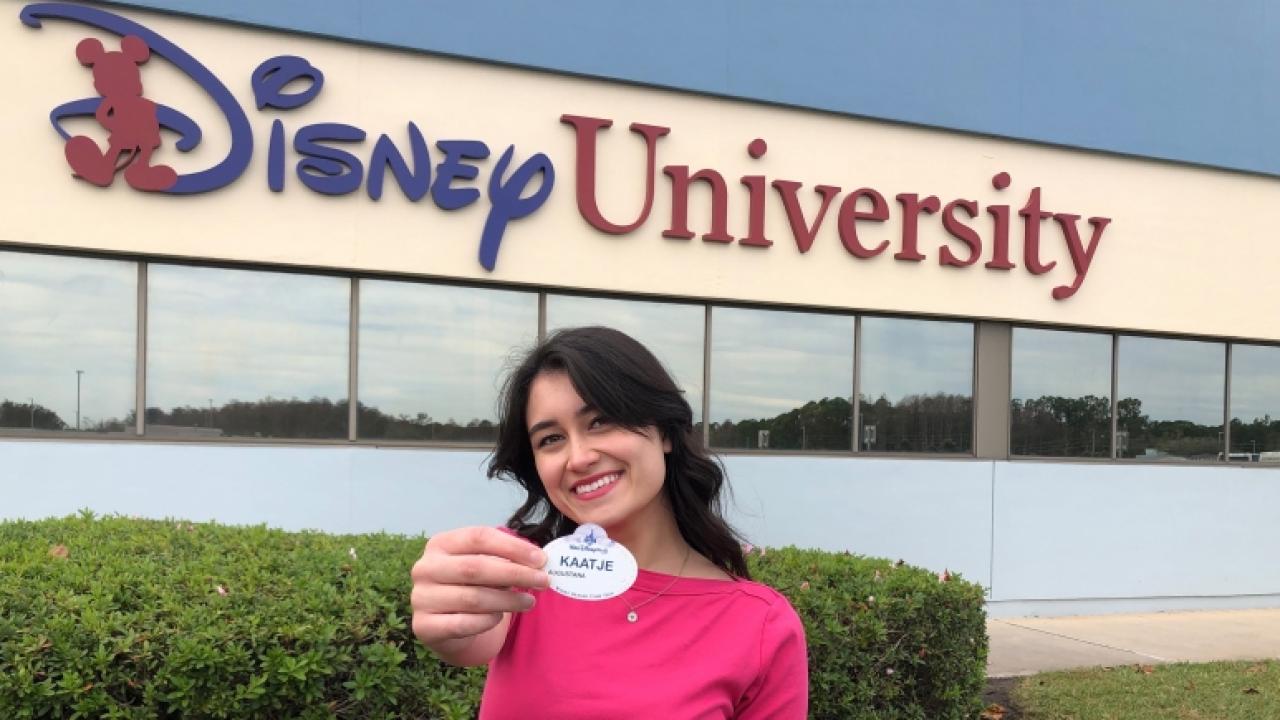 Kaatje Weiland ‘19 has been granted a once-in-a-lifetime opportunity — twice.

More than one year after Weiland was sent home early from the Disney College Program due to COVID-19, she is back in Orlando, Florida, living out her dream of being a Disney World cast member.

“I read about it, and I just became really enamored by the program and by the idea of working and living at Disney World,” Weiland said. “It became a goal of mine to participate in and complete this program. So, when I was in college I applied, a few times in fact, to be here.”

At the end of 2019, when Weiland graduated from AU with a journalism major, she learned that she was accepted to the competitive Disney College Program and would begin the following spring.

Weiland arrived in Orlando in February of 2020, ready to begin a 6-month, on-the-job experience working in Disney’s parks and resorts while taking part in personal and career development. The Wisconsin native was assigned a hostess position at Be Our Guest, a Beauty and the Beast-themed restaurant in Magic Kingdom. Then, COVID-19 hit. Initially, Disney announced that the parks would be closed for two weeks. 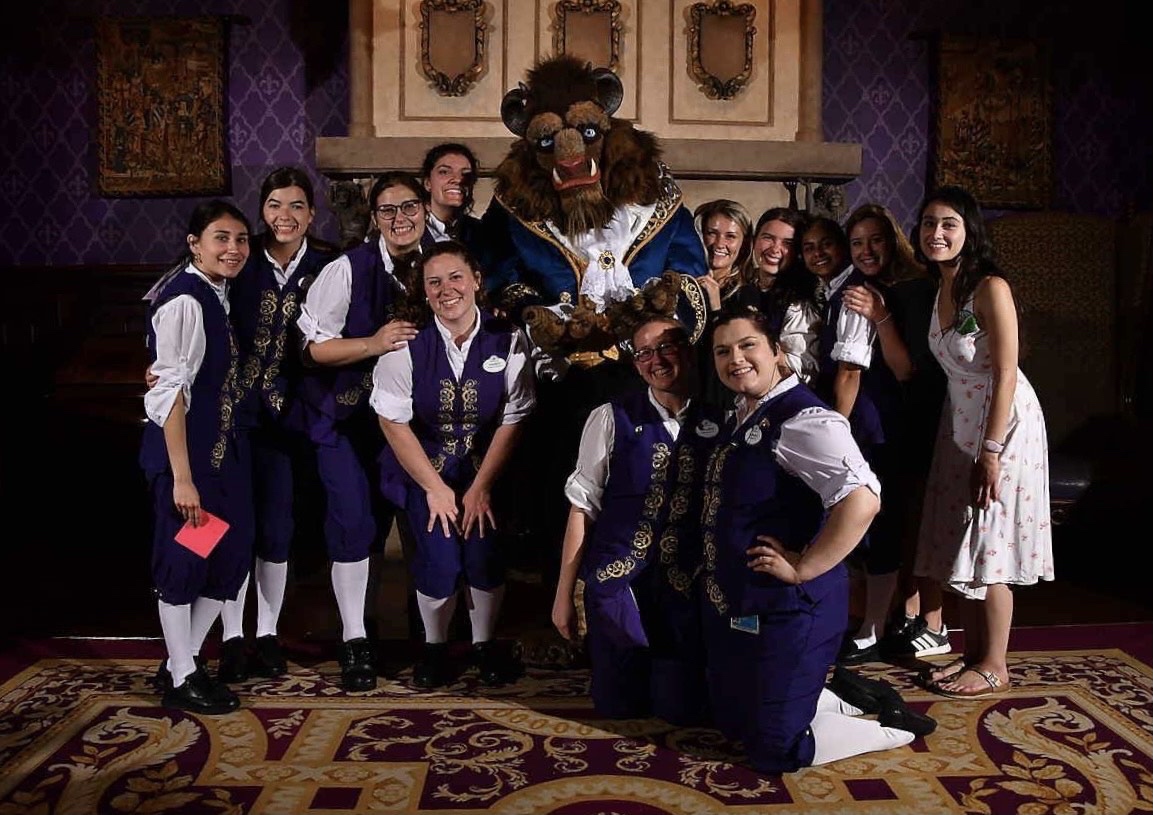 “My friends and I all naively assumed, ‘Oh, we’ll all come back after two weeks. It'll be fine,’” Weiland remembered. “And then a few days later, we got the email that we all had to pack our bags and go home.”

Weiland’s last day at Disney World was March 15, 2020. Despite the abrupt end to the program, she said that her last day was “really magical.”

“People were so nice to us; they were giving us all kinds of stickers and buttons, and they were letting us to the front of the line — just because they felt guilty that there were all of these college-aged people just crying around the park,” Weiland said, laughing.

Weiland returned home to Wisconsin Rapids amid the pandemic and reminisced about her six weeks at the happiest place on Earth.

“It was honestly one of the best months of my life,” Weiland said. “I had so much fun, and I loved my roommates and being able to hang out with them in Disney World and work at this place that I really loved. I was really heartbroken when it ended.”

After returning home from Disney in March of 2020, Weiland completed an internship at a literary agency and, most recently, began a position at a local library. However, in May, Weiland received word that the Disney College Program would be coming back. Furthermore, Disney invited participants whose program ended early or was suspended to be the first to reapply. 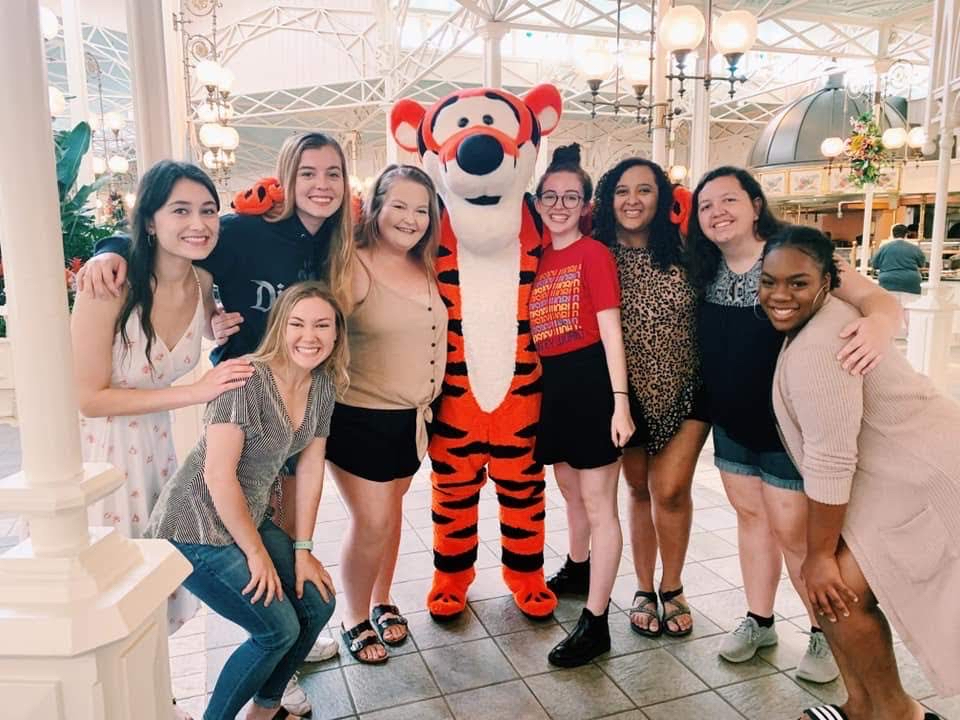 “I was really excited that the program was coming back because I had such a good experience even within just one month, and I met some really, really great friends,” Weiland said. “But, when I got the email, I thought to myself, ‘Do I want to leave to pursue this thing that I've always wanted to do or do I stay at this really great job with people that I like where I'm surrounded by books that I love?’”

Weiland had also planned to start courses in English literature and communication arts last month to obtain her teaching certificate. After her adviser told her that it wouldn’t be an issue to defer enrollment, she began to imagine returning to Disney.

“I was talking to my parents, and I was expressing a little bit of hesitation saying I didn't know if it would be worth it to go,” Weiland said. “And, my dad looked at me and said, ‘Kaat, you've always wanted to work for Disney, and you were so heartbroken when you left last year so now that you're getting the opportunity again, why wouldn't you?’ So, I think that conversation made me really realize how much my time at Disney last year had meant to me and the fact that if I didn't go this year, it would be something that I would always wonder about.”

Weiland returned to Disney World on June 28, and will stay until January. She is a hostess at a restaurant called Kona Cafe in Disney’s Polynesian Resort — an island-inspired, Lilo & Stitch and Moana-themed resort by Magic Kingdom.

Weiland is living in a new housing complex, Flamingo Crossings Village and works five days a week, usually taking evening shifts. On her days off, she hits the parks with her roommates.

While Weiland doesn’t have any specific goals regarding her experience, she hopes to have the chance to network with Disney professionals and take seminars and sessions focused on ‘Exploring Disney.’ Weiland spends her days among amusement parks and Disney characters, but for her, the best part of the experience is the connections she has made. 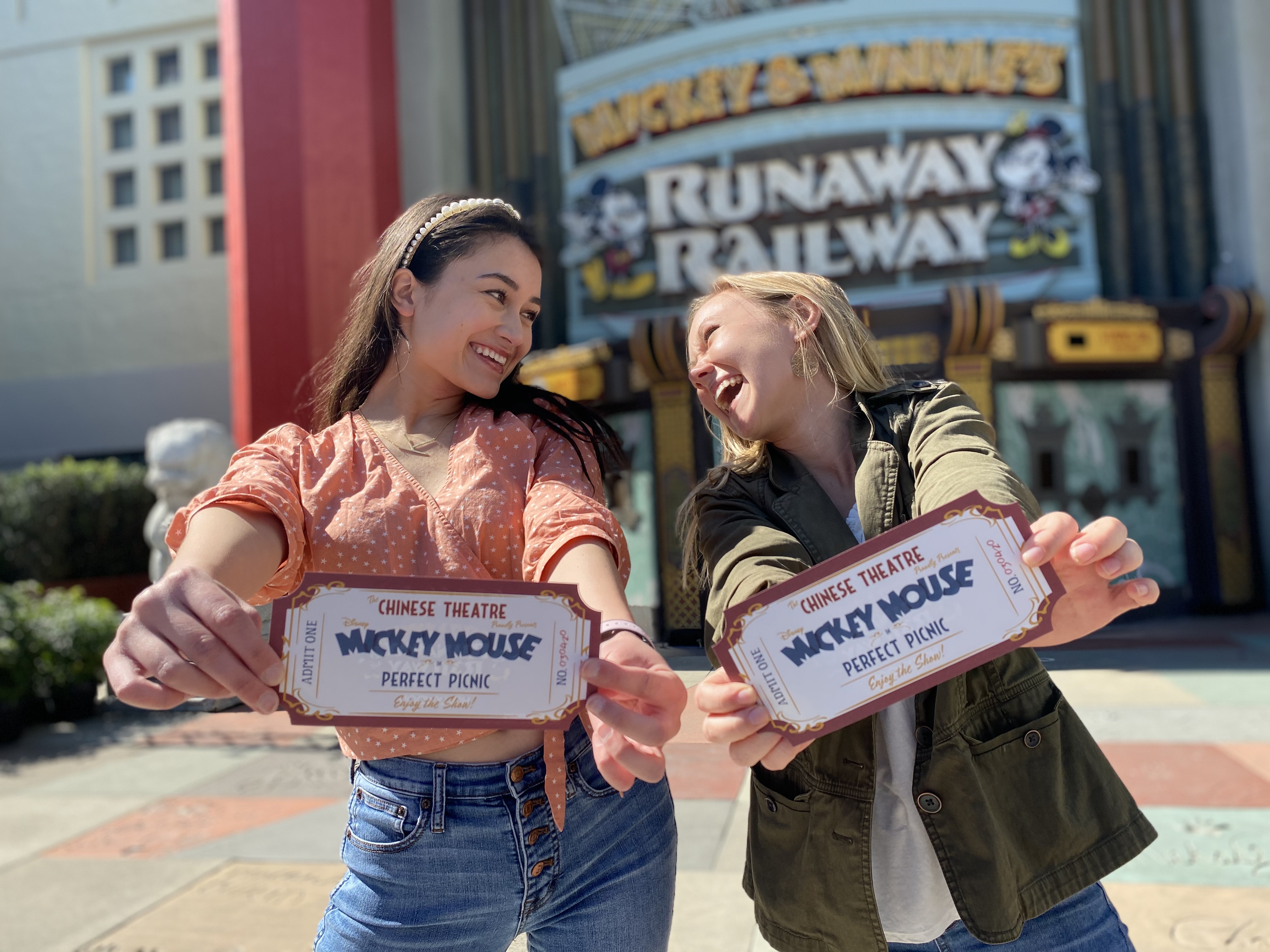 “My favorite thing about this program is all the different people that you meet,” Weiland said. “It’s such a unique experience to be here, and it ends up really bonding you with people you probably wouldn't have met in any other situation, and it's people you have things in common with, as you all love Disney.”

Weiland said attending Augustana six hours away from her hometown gave her the confidence to spread her wings.

“In any situation, my favorite thing about a place is usually the people, and so I'm lucky to have made friendships and connections at Augustana that helped me to grow as a person and grow in my confidence and be sure that the Disney College Program program was something that I wanted to pursue,” said Weiland.

And, this time around, Weiland is simply planning to make the best of the experience.

“I feel even more lucky to have this second opportunity to make magic in my favorite place,” said Weiland.