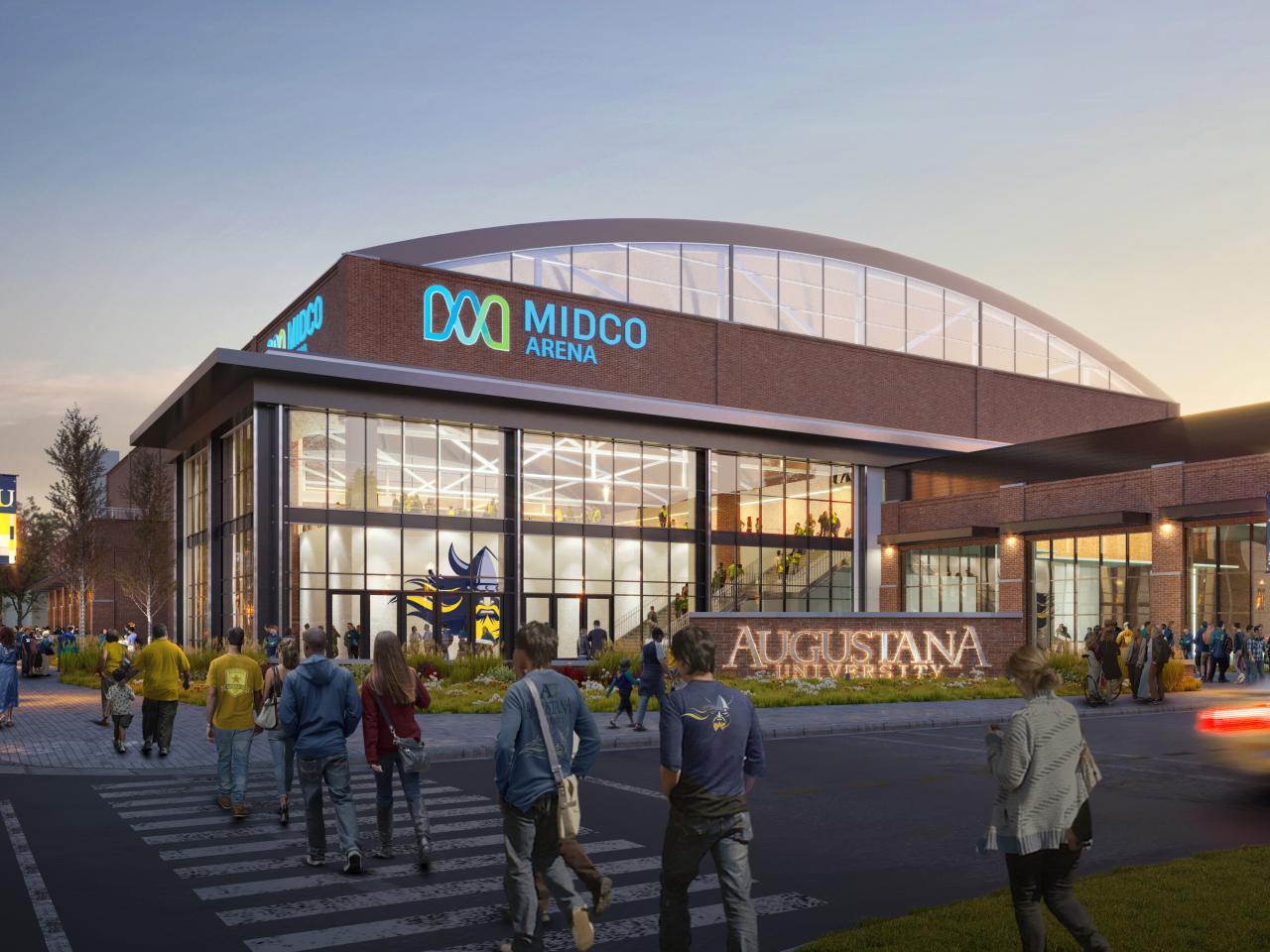 Read More About the Launch of Augustana's Men's Hockey Program in Sioux Falls.Business

Augustana University officially announced today that it will be home to the Viking Men’s Hockey program — set to take the ice in the fall of 2023. The public announcement came during a groundbreaking ceremony on AU’s campus for the program’s new $40 million Midco Arena, facilitated by a lead gift from T. Denny Sanford, Midco, Sanford Health and several other major donors.

“Augustana's program is the first of its kind in the state and one of only 61 men's hockey programs competing at the Division I level in the country. Sioux Falls needs a great college hockey program and under the leadership of President Stephanie Herseth Sandlin, Augustana is the place to make it happen,” South Dakota Businessman and Philanthropist T. Denny Sanford said.

“This is a celebratory day and a difference-making day. Thank you, Denny Sanford, for leading the way to bring Division I hockey to Augie, Sioux Falls and the great state of South Dakota. We’re proud to be one of the many sponsors and donors helping support Augustana in making this dream come true, and we’re grateful for the opportunity to put the Midco name on the arena. By bringing DI hockey to Sioux Falls, Augustana’s campus will become even more of an activity hub for the region while continuing to graduate leaders for the years to come,” said Midco President & CEO Pat McAdaragh '81. “Midco is thrilled to be part of this initiative, and excited to welcome everyone to the Midco Arena.”

The announcement is another step forward in accomplishing goals set forth in Augustana’s strategic plan Viking Bold: The Journey to 2030. The plan includes an effort to provide student-athletes the opportunity to compete at a higher level, elevate the university’s profile and inspire Sioux Falls to enthusiastically embrace Augustana University as its hometown team by serving the community and integrating its mission with the community’s needs.

“Hockey is the right program at the right time for where Augustana is now, and it’s just been so affirming because of all the enthusiasm that our campus, alumni, community and donors have expressed,” said Augustana President Stephanie Herseth Sandlin. “This is more than a men’s hockey program at Augustana. This is a university-wide initiative that has great potential impact for our city and region.”

The hockey program, which will compete at the NCAA Division I level, will be the Vikings’ 23rd collegiate sport and first of its kind in South Dakota. Augustana Athletics recently announced last month that it will be adding women’s lacrosse, also the first collegiate program of its kind in the state, regardless of division or affiliation.

With the facility first imagined by JLG Architects, Edgemoor Infrastructure & Real Estate has been selected to manage the design, development and construction south of 33rd Street on S. Grange Avenue where the hockey team will practice and play games. The Midco Arena is planned for 3,000 seats, as well as luxury suites, providing a first-class experience for both student-athletes and sports fans.

“There’s no better time in the history of college athletics to start a program. The hockey program, and what it means for our campus, is indescribable,” Augustana Director of Athletics Josh Morton said. “And, building a new facility — there’s something invigorating about it, not only for Augustana Athletics, but for the broader community. For Augustana to take that step — it separates us.”

Augustana plans to have a head coach for men’s hockey in place by May 2022, which will give the coach more than a year to build a roster.

Submissions are now being accepted for the Augustana Hockey Season Ticket Interest List. Fans interested in season tickets are encouraged to submit their contact information and desired number of tickets in the form provided at goaugie.com/HockeyTickets.