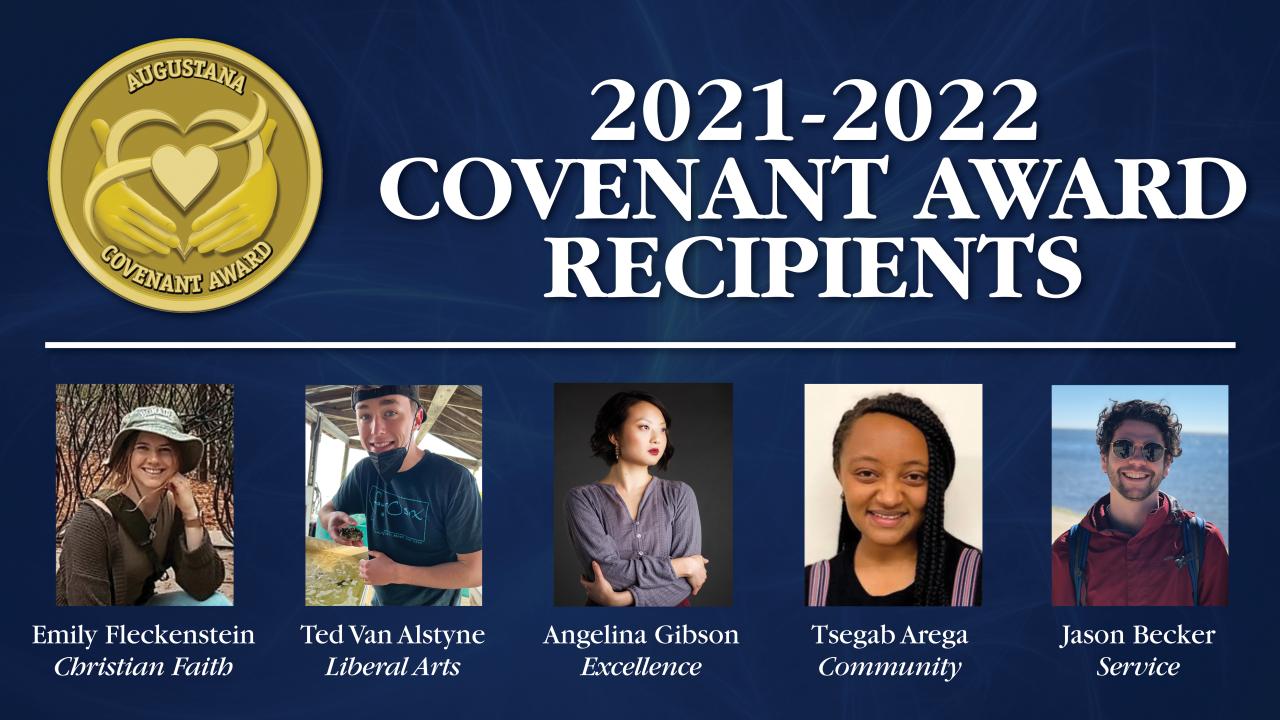 Five Augustana University students received a 2022 Covenant Award in a ceremony held in the Chapel of Reconciliation on Wednesday, April 27. The Covenant Awards lift up those who exemplify Augustana’s core values: Christian, Liberal Arts, Excellence, Community and Service.

The Covenant Awards, presented every academic year, were created by students to more clearly define these shared values and deepen the understanding of the rights and responsibilities that accompany membership in the Augustana community. The recipients are selected by committees of faculty and staff that seek nominations from all members of the AU community. A cast bronze medallion is given to each awardee, which may be worn during commencement festivities.

The 2022 Covenant Award recipients are:

Emily Fleckenstein ‘22 is a religion major from Hinton, Iowa. She has been a member of the chapel staff, University Chorale and Spirit Squad.

“Emily's whole approach to her faith is active — she wants to not only believe but to show that belief through action,” Fleckenstein’s nominator wrote. “She's been on chapel staff and has used that position to work with the Interfaith Council on joint ventures.”

“Emily has adopted the best of some of Jesus's traits: she's righteously against injustice, she sees people as they are and she loves people for who they are,” the nominator continued. “Emily is headed toward seminary because she feels called to be a pastor. She's felt this call since she was a teenager, and her time at Augustana has been well spent deepening her own academic understanding of Christianity, as well as broadening her horizons so that she can best understand and support the world around her.”

Ted Van Alstyne ‘22 is a biology major from Helena, Montana. He is the founder and president of the Ukulele Club, member and treasurer of the Augustana Choir, volunteer musician for Campus Ministry’s senior sermons, member of Augustana’s Theatre Company, chemistry laboratory assistant and tutor, as well as a research assistant.

“Ted is a bit of a free spirit in that his interests are very broad. He knew after the summer of 2020 that his future plans should include medical school rather than graduate school, but that he could also become a musician or an actor,” Van Alstyne’s nominator wrote. “Although he loves the lab, the joy of making scientific discoveries and the thrill of performing on stage, Ted wants to impact patients directly as a doctor.

“Ted brings passion, enthusiasm, curiosity and dedication to all of the projects in which he participates.”

Nominees for the Covenant Award for Excellence are those who commit themselves to high virtuous and ethical standards, personal integrity, human excellence, self-discipline and self-improvement. These nominees are known for bringing out excellence in others. Their commitment to excellence has shaped their plans for the future.

Angelina Gibson ‘23 is a music, religion and English triple major. The Sioux Falls native is the founder and choreographer of the ArtiTänzer Project and member of Sigma Tau Delta (English), Phi Sigma Tau (philosophy) and Theta Alpha Kappa (religion). Gibson is also the recipient of the Fryxell and Dahl-Hong scholarships in English, Shirley Davis Westerlund, Nellie/Verner Berg and AR Thompson scholarships in music, as well as a 2020 Nobel Peace Scholar finalist.

In addition, Gibson’s nominator noted that she is an internationally-certified tutor at Augustana’s Nancy Dickinson Writing Center, and became its first assistant director due to dedication and extra effort. Gibson is also an accomplished pianist who recently won the Augustana Concerto Aria for piano.

“Angelina has so many talents and sharpened skills that will no doubt (allow her to) excel at anything she tries. I believe her passion is to get a Ph.D. in ethnomusicology with a focus on ethnochoreology,” Gibson’s nominator wrote. “I'm delighted to see that she's connecting her passions — music and dance — with her vocation: teaching at the university level.”

Tsegab Arega ‘23 is a sociology and government & international affairs double major from Sioux Falls. She is an ambassador for the Office of Diversity, Equity & Inclusion and the Office of Admission, chair of the Augustana Student Association’s (ASA) Diversity Committee and president of Augustana’s chapter of iGNiTE.

“Tsegab’s dedication to advocating for the holistic collegiate experience for her classmates can be seen in her tenacious pursuit in challenging our university community to invest more in the rich diversity of our community while promoting inclusivity with accountability,” Arega’s nominator said.

Her nominator added that Arega has created initiatives such as Mindful Mondays, which examine mental health in marginalized communities; The Freedom Writers Project, in which students are given the opportunity to publish creative works of art geared at sharing their experiences in society; and youth mentorship within the Sioux Falls School District.

“Because of her commitment, Tsegab’s peers have come to rely on her to be their representative voice throughout the campus community,” said the nominator. “Tsegab possesses the tools needed to be a change agent through the demonstrated use of acquired knowledge, support and awareness to create an inclusive environment.”

Jason Becker ‘22 is from Hartington, Nebraska, and is majoring in biology. He is the president of Serving and Learning Together (SALT) and a member of Lost & Found, Pre-Med Club, Kidney Disease Screening and Awareness Program (KDSAP), Augustana Bike Club, Augie Green and Beta Beta Beta.

“As SALT president, you might think Jason’s role is really visible, but what isn’t easily seen is the amount of time and priority that SALT has in Jason’s life,” Becker’s nominator said. “Even as he is in his senior year and preparing for the Medical College Admission Test (MCAT), Jason has doubled down on his commitment to SALT.”

Becker also served as a Viking Guide for two years, acting as a mentor to first-year students. He plans to attend medical school in the fall.

“Jason is a connector and builds relationships in one-on-one conversations and small group interactions — recruiting students for SALT in his natural, daily interactions,” noted his nominator. “His heart of service will make him a caring medical professional.”