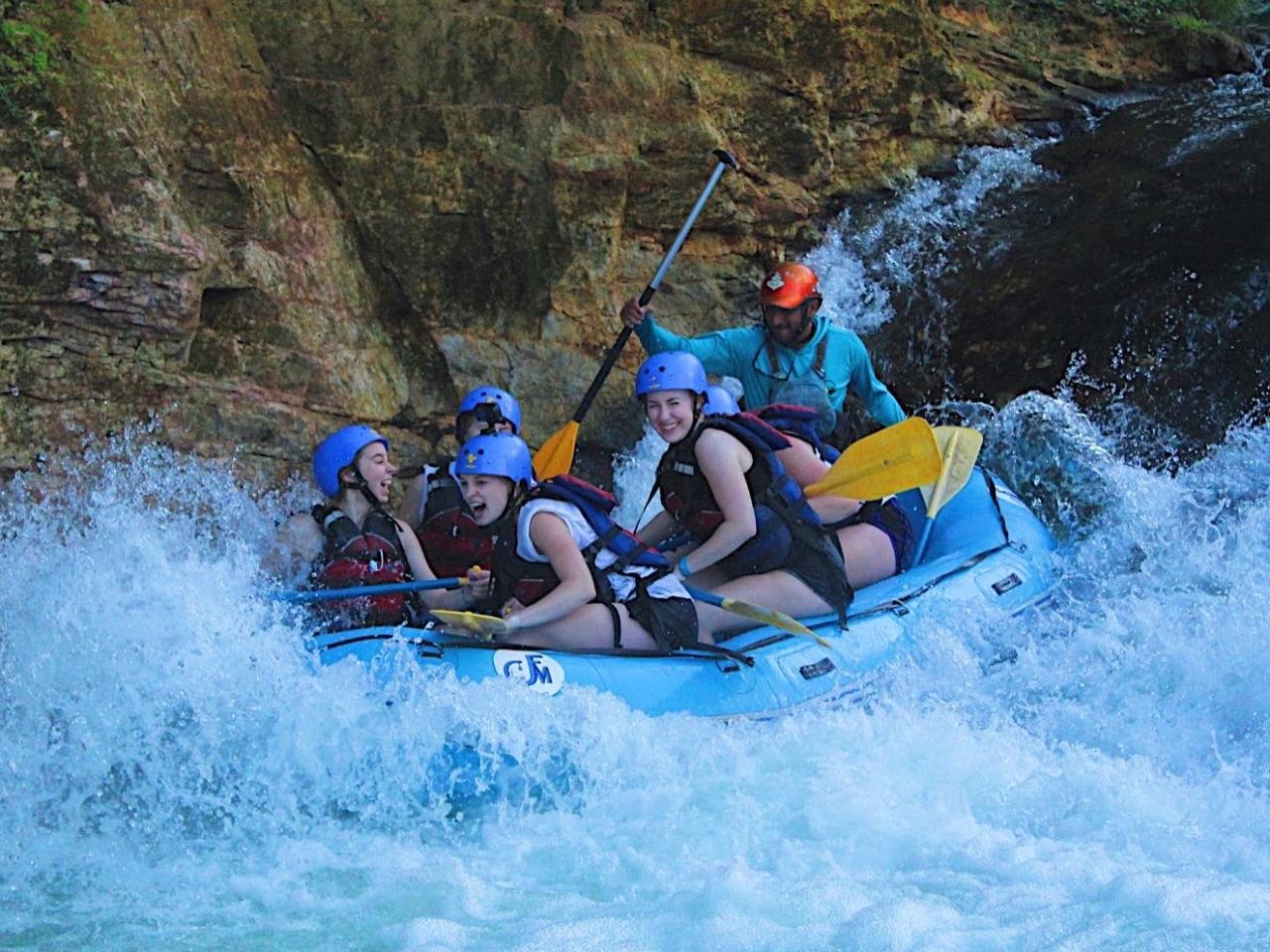 Faculty-Led programs are designed specifically for AU students by AU faculty and take place all over the world. In a faculty-led program, you will study, live and travel with other AU students — and you have the advantage of learning from a AU faculty member who specializes in the program’s subject of study. Each year, Augustana offers 10-15 courses during Interim (J-Term), spring break and summer. The courses vary in location, topic and length away.

Sister School programs are based on agreements between AU and foreign institutions located in Norway and Europe. They are immersive experiences in which AU students take courses directly from the partner institution, get acquainted with the local culture and where weekends and holidays are free to explore. While knowledge of the host language is useful, it is usually not required because most exchange courses are taught in English. Academic year, semester and summer terms are available. As with most study abroad programs, educational systems and levels of student services can vary and may be different from what you are used to at AU. Students are encouraged to be independent and willing to seek out assistance at their host institution.

These programs are provided by third-party organizations that work closely with U.S. institutions and with universities abroad. Some programs may include internship and volunteer options. Most provider programs have a limited number of openings and offer admission on a first-come, first-serve basis. Applying early may increase the likelihood that you can get your preferred housing and course options. Programs are available during the academic year, semester, Interim (J-Term) and summer. Augustana's approved study abroad providers offer courses to a variety of locations. Students from all over the U.S. apply to these programs. Participation can be a great way to meet students from your host country and peers from other U.S. colleges and universities.

The American Association of Teachers of French (AATF) recognizes one graduating senior who has demonstrated excellence in the study of French as well as exceptional commitment to the French language and the many cultures where it is spoken. A recipient at Augustana University must: be a French major, a non-native speaker of French, have achieved a minimum 3.4 GPA in French, and have completed an Honor's Thesis with a minimum grade of A-. MDFL recipients include:

An annual award for a student studying in the Dept. of Modern Foreign Languages, this scholarship, established in 2001, is in honor of Dr. Gerhard Scmhutterer—who taught German, Geography and World History at Augustana University from 1953-1985—and his wife Marilyn. Recipients include:

An annual award for a German major, this award was established in 1969 in honor of Ruth Sorlie Stenseth who taught German at Augustana University until her death in 1964. Recipients include:

Established in 1981, this award was given to a language major or minor, preferably in Norwegian. The award was given in memory of Dr. H. M. Blegen who served as Professor of French and Spanish at Augustana University from 1927 until his retirement in 1965 and thereafter as the college archivist until his death in 1980. The Scholarship is currently inactive. Recipients include:

Established in 1981, this award was, until 1999, awarded to a student majoring in foreign languages. Recipients include:

An annual $2,500 non-renewable national scholarship awarded by The American Foundation for Translation and Interpretation, Inc. to a US citizen and full-time student who has completed at least one year of post-secondary education and who has at least one year of academic work remaining to complete their program of study in translation or interpretation. Preference is given to students in B.A./B.S., M.A., and Ph.D. granting programs. Visit the AFTI website for additional information and an application.

Two annual scholarships of up to $4,000 awarded to sophomore or junior French majors or minors who have never studied in a French-speaking country. The scholarships help to enable the recipients to study in a French-language institution of higher learning for a minimum of four weeks during the summer. Applicants will select their institution as well as arrange for their travel abroad. Visit the ASFAP website for additional information and an application.

This travel grant aims to provide undergraduate students enrolled in an American University with a travel stipend of up to $1,500 to discover France. It is open to sophomore, junior and senior students who are enrolled in a double major including one major in French and one major in another discipline. Consideration will also be given to students enrolled in a minor/certificate in French and majoring in another subject. For complete details an and application, visit the award's webpage. MDFL recipients include:

Sponsored by The National Security Education Program (NSEP), David L. Boren Undergraduate Scholarships offer a unique opportunity for U.S. undergraduates to study abroad. NSEP awards scholarships to American students for study of world regions critical to U.S. interests (including Africa, Asia, Central & Eastern Europe, Eurasia, Latin America & the Caribbean, and the Middle East). NSEP focuses on geographic areas, languages, and fields of study deemed critical to U.S. national security. NSEP Boren Scholarships are intended to provide support to U.S. undergraduates who will pursue the study of languages and cultures currently underrepresented in study abroad and critical to U.S. national security. Study of a foreign language appropriate to the identified country must be an integral part of each proposal. Visit the NNSEP website for additional information and an application.

The Congress-Bundestag Youth Exchange for Young Professionals (CBYX) is a fellowship funded by the German Bundestag and U.S. Congress, that annually provides 75 American and 75 German young professionals (18-24 years old) the opportunity to spend one year in each others' countries, studying, interning, and living with hosts on a cultural immersion program. The program is open to candidates in all career fields who are interested in a year of cultural exchange. Visit the CBYX website for additional information and an application.

The Critical Language Scholarship (CLS) Program is an intensive overseas language and cultural immersion program for American students enrolled at U.S. colleges and universities. The program includes intensive language instruction and structured cultural enrichment experiences designed to promote rapid language gains. CLS is part of a wider government initiative to expand the number of Americans studying and mastering foreign languages that are critical to national security and economic prosperity. CLS plays an important role in preparing students for the 21st century's globalized workforce and increasing national competitiveness. The U.S. Department of State sponsors the program with funding provided by the U.S. Government and administered by American Councils for International Education. Contact the Augustana University faculty representatives.

The Davies-Jackson Scholarship presents a unique opportunity for students with exceptional academic records, who are the first in their families to graduate college, to participate in a course of study at St. John’s College at the University of Cambridge. Graduating U.S. seniors may apply for the two-year B.A. degree program. Scholarship recipients will have the opportunity to immerse themselves in the rich educational environment of St. John’s, which was founded in the 16th century, by reading in several subject areas including: Classics and Modern and Medieval Languages. Contact the Augustana University faculty representative and consult the Davies-Jackson Scholarship website.

The German Academic Exchange Service ((Deutscher Akademischer Austauschdienst) is the German national agency for the support of international academic cooperation. The agency (DAAD) offers funding for students, faculty, researchers and others in higher education, providing financial support to over 55,000 individuals per year. DAAD also represents the German higher education system abroad, promotes Germany as an academic and research destination, and helps to build ties between institutions around the world. Complete information and application are available on the DADD website. MDFL recipients include:

The Benjamin A. Gilman International Scholarships, funded by the U.S. State Department, provide up to $5,000 in additional grants for students currently receiving Pell Grant funding as part of their financial aid package. Preference is given to students from diverse backgrounds, those pursuing semester or year-length programs, students with science majors, and those interested in non-traditional locations - though it is not limited to students who fit that criteria. About one in three applications are accepted, so if you receive a Pell Grant, be sure to apply! Students interested in pursuing Critical Languages (Chinese, Arabic, Korean, Russian, etc.) can receive up to an additional $3,000. Students going abroad for Spring Semester must apply by early October; those going abroad for Fall Semester must apply by early April. Contact the Augustana University faculty representative. Complete information and an application are also available on the Gilman website. MDFL recipients include:

Thanks to the generosity of the late Walter Jensen, the AATF is able to offer a scholarship for study abroad to a future teacher of French. Income from gifts of stock given by Mr. Jensen fund one $1,500 scholarship per year to help a student pay for a semester or year’s study abroad. This award is intended to allow a deserving student to participate in a long-term study abroad experience he or she might not otherwise be able to afford.. The applicant must be at least eighteen years old and enrolled in an established teacher education program in French. Visit the American Association of Teachers of French website for additional info. and contact Dr. Fish. MDFL recipients include:

The Killam Fellowships Program provides an opportunity for exceptional undergraduate students from universities in Canada and the United States to spend either one semester or a full academic year as an exchange student in the other country. The program provides a cash award of $10,000 US ($5,000 US per semester). In addition, the Foundation provides all Killam Fellows with an allowance of $500 US to offset health insurance costs. In addition, all Fellows are eligible to apply for a mobility grant in an amount not to exceed $800. The idea of the mobility initiative is to allow students to undertake an educational field trip, providing the Fellows with the opportunity to gain a fuller understanding of the culture of the host country. For complete information and an application visit the Killman website.

The annual Mary Isabel Sibley Fellowship is awarded alternately in the fields of Greek and French. The award may be used for the study of Greek language, literature, history or archaeology, or the study of French language or literature. The fellowship has a stipend of $20,000. The stipend will be paid in two installments, the first on July 1 of the award year and the second on the next January 1, unless the Fellowship Committee orders the stipend withheld because the fellow has disregarded the purpose of the award as stated by the donor. Candidates must be unmarried women 25 to 35 years of age who have demonstrated their ability to carry on original research. They must hold a doctorate or have fulfilled all the requirements for a doctorate except the dissertation, and they must be planning to devote full-time work to research during the fellowship year. The award is not restricted to members of Phi Beta Kappa or to U.S. citizens. Additional info. and an application are available on the Pi Beta Kappa website.

In cooperation with the German Academic Exchange Service (DAAD), offers scholarships for one semester of study at one of seven German universities, followed by a six-month internship in a company or research institute in Germany. The scholarships are open to sophomores or juniors who are U.S. citizens studying at U.S. accredited institutions who are pursuing majors in: business, management, economics, architecture, art, design, journalism, or social work. Candidates must have outstanding academic record and personal integrity, as proven by academic achievement and letters of recommendation. For complete information and an application, visit the SIP website.

Scholarships for the intensive summer program in Russian. The University of Washington's Intensive Summer Slavic Program offers students the ability to complete two semesters of Russian or Czech during a nine-week intensive summer session. The program offers one full-tuition scholarship for the summer Russian Program. Visit the program website or via email at slavicll@u.washington.edu.

Connect with us on social media.