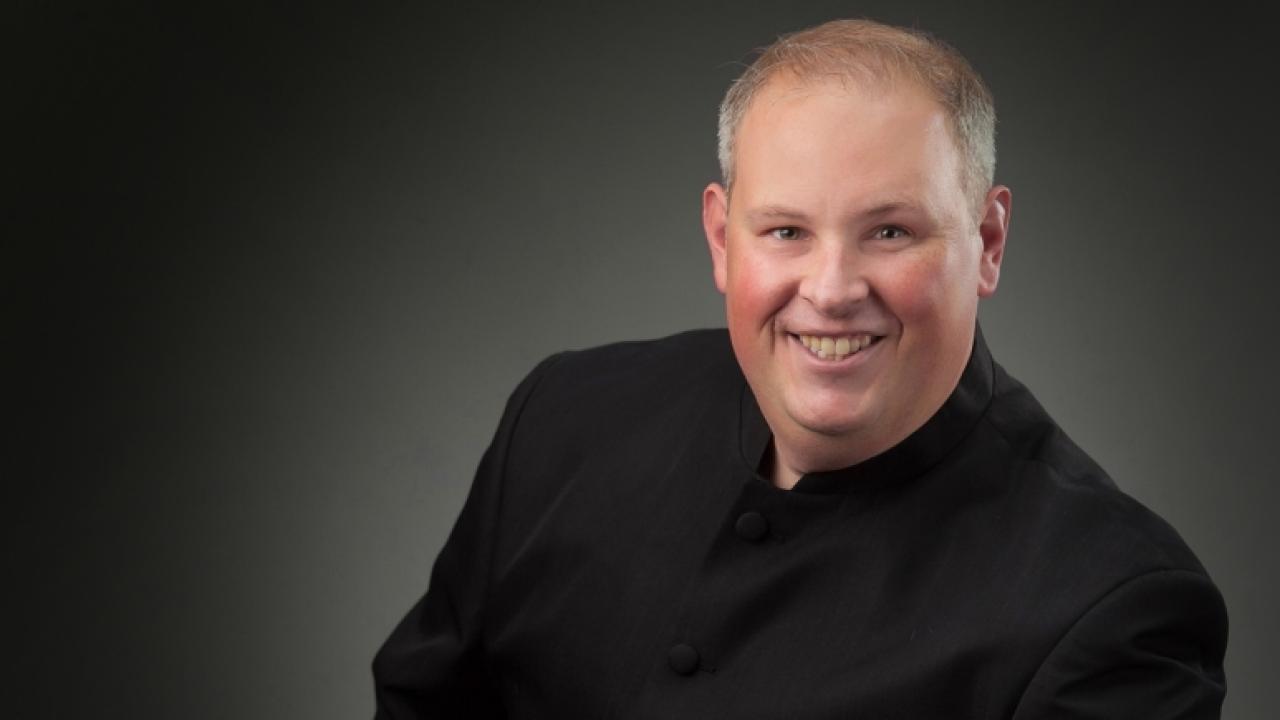 Augustana University announced today that Dr. Peter Folliard has been named the inaugural Dean of the School of Music. Phase I of Augustana’s strategic plan — Viking Bold: The Journey to 2030 — identified the goal of establishing a School of Education and School of Music. The first step towards building these schools involved identifying inspiring and creative leaders to help develop schools that move Augustana forward while doubling down on the university’s mission and core values.

Folliard, a New Jersey native, joined Augustana in 2017 as the conductor of the Augustana Orchestra. Folliard is also the visionary behind Augustana’s world-class recording studio, Studio 47, which produces a number of podcasts and recordings.

Augustana Provost and Executive Vice President Dr. Colin Irvine said, “Dr. Folliard brings an extraordinary amount of professional experience, artistry and proven leadership to this opportunity. I am confident that he will elevate Augustana’s music program through the talents and collaborative efforts of our exceptional music faculty, our committed and supportive alumni, and our students, both present and future.”

Folliard’s first conducting position was with the United States Air Force Bands program. Upon earning his commission from Officer Training School, Folliard was assigned to work with the United States Air Force Band, the Air Force’s premier musical unit in Washington, D.C. There, Folliard was appointed conductor of the Air Force String Orchestra and conductor of The Singing Sergeants. Additionally, Folliard served as the associate conductor for the Concert Band and Ceremonial Brass, and was producer of the organization’s recording projects.

Following his service in the Air Force, Folliard was offered a teaching assistantship accompanied with a full scholarship to study at the Eastman School of Music with master pedagogue Neil Varon. There, he also held the position of Eastman conducting fellow with the Rochester Philharmonic.Before coming to Augustana, he served at the Crane School of Music at the State University of New York at Potsdam, where he served as interim director of orchestras.

“I am thrilled and honored to have been offered this opportunity,” said Folliard. “We are building on a team that is already strong, and we will continue to elevate Augustana’s brand through attracting talented musicians who seek rigorous and innovative musical training. What makes us unique is our commitment to serving those who desire to make music their vocation or avocation.”

Augustana University has a long tradition of music making, with 2020 marking the 100th anniversary of the Augustana Choir.  Augustana’s music ensembles are comprised of students from every major, with approximately 250 students across campus participating in one or more ensembles. With offerings in band, choir, orchestra, jazz, percussion, opera theatre and chamber music ensembles, Augustana provides its students the opportunity to study with world-class faculty in newly renovated facilities including Hamre Recital Hall, the Lillehaug Instrumental Room and the Winden Choral Room. Augustana also embraces the intersections of music and technology with Studio 47 and the Pederson-Homan Center, an 11-seat Mac lab equipped for digital music production.

The School of Music will be the second school developed in Augustana’s history and will be operational by fall 2020. Dr. Laurie Daily was announced as the inaugural Dean of the School of Education in late April.