Class of 2019: 99% of Augustana Graduates Employed in Major or Chosen Field 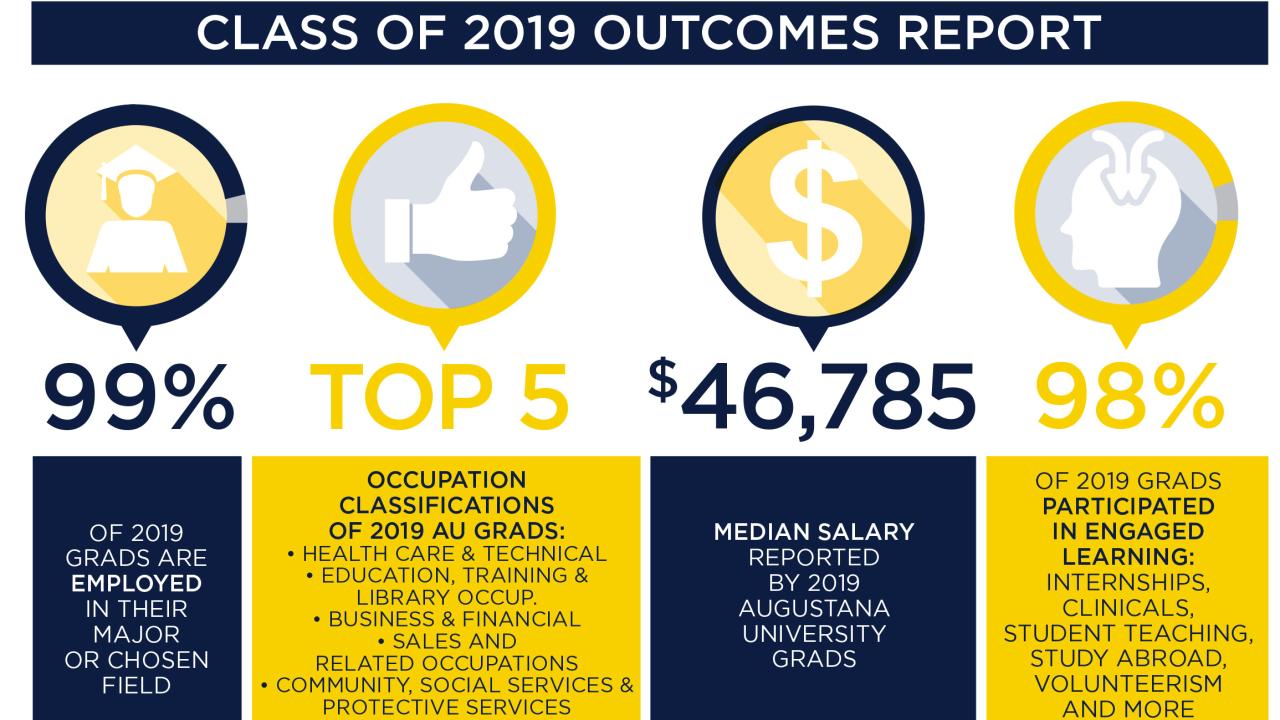 According to a newly published report, 99 percent of recent Augustana University graduates seeking employment are employed in their major or chosen field.

The Outcomes Report done by the Student Success Center, in collaboration with the Office of Assessment, doesn't just highlight Augustana student success over the course of one year. The report also shows that Augustana graduates can compete consistently in a rapidly changing marketplace. The employment rate of Augustana graduates over the last five years is 98 percent.

Billie Streufert, assistant vice provost for student success and engagement, says these numbers are what both students and parents look to when making decisions on where to attend college — they look to an institution's graduates. And Streufert says she can genuinely say Augustana's graduates are living out the institution's motto of service.

“It’s not just about getting a job; it’s about landing a meaningful one.” Streufert said, “Whether they just found out they were admitted into a premier professional graduate program or landed their dream job with a Fortune 500 company, the Student Success Center is honored to celebrate with graduates when they update us about the next great adventure on the horizon."

While the federal government requires that every post-secondary institution publish these types of metrics, Augustana is unique in its methodology.  Augustana follows the gold standard — a standard set by the National Association of Colleges and Employers (NACE). The data includes the activities within six months of graduation of individuals who completed a baccalaureate degree in the 2018-19 academic year. Through surveys, emails, phone calls and social media responses, the university has obtained information on 91 percent of these graduates, which exceeds the minimum NACE knowledge rate by 26 percent.

The report shows that Augustana graduates work in a variety of exciting roles all over the globe. They reported working in 16 states and four other countries, as well as Washington, D.C. Nearly two out of every three graduates (64%) who reported their location are working in South Dakota, of which 92 percent are employed in the Sioux Falls region. Members of the Augustana Class of 2019 were hired by more than 125 unique organizations. Top employers include Sanford Health, Avera Health, the Sioux Falls School District, Mayo Clinic and KPMG International Cooperative.

From a technical writer for the U.S. Geological Survey Center to a case manager for Southeastern Behavioral Health and a bank examiner for the South Dakota Department of Labor and Regulations, our graduates have landed competitive positions.

"Graduates report that they're making a difference in the community, in the world," said Streufert.

Many Augustana students are continuing their education at top graduate schools. Twenty-one percent of the respondents reported pursuing additional education within six months of graduation. Ninety-four percent of the students who provided information were admitted.

“Some schools just report the percent that are pursuing graduate school; we only count them if they were admitted," Streufert said.

Modeled after the Gallup-Purdue Index, Augustana takes the report a step further with a five-point Likert scale to rate the graduates' agreement with the Augustana experience. Ninety-six percent of respondents agreed that Augustana is passionate about the long-term success of its students and 95 percent said their professors at Augustana cared about them as a person.