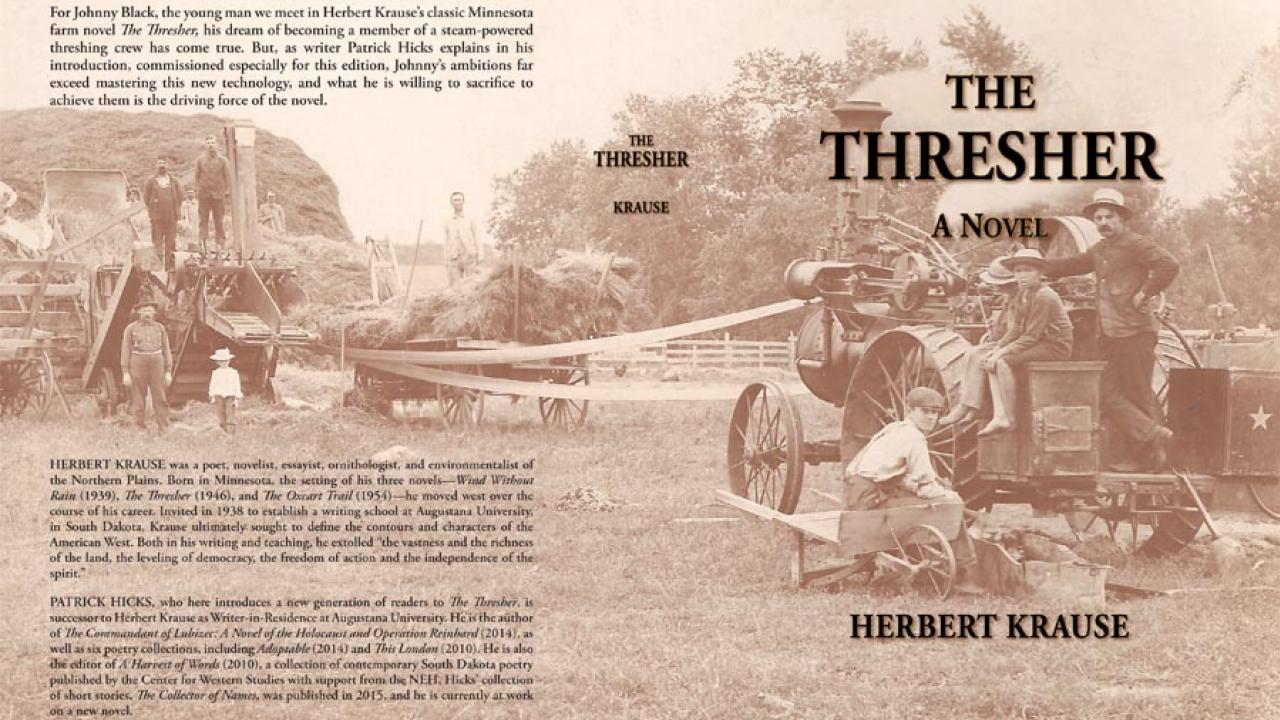 For Johnny Black, the young man we meet in Herbert Krause’s classic Minnesota farm novel "The Thresher," his dream of becoming a member of a steam-powered threshing crew has come true. As fireman, he builds the fire that generates the steam and blows the whistle to wake up the rest of the crew.

As writer Patrick Hicks explains in his introduction, commissioned especially for this edition, Johnny’s ambitions far exceed mastering this new technology, and what he is willing to sacrifice to achieve them is the driving force of the novel.

Listen to an interview with Writer-in-Residence Patrick Hicks on South Dakota Public Broadcasting's "In the Moment" program.

About the Authors: Herbert Krause was a poet, novelist, essayist, ornithologist, and environmentalist of the Northern Plains. Born in Minnesota, the setting of his three novels—"Wind Without Rain" (1939), "The Thresher" (1946), and "The Oxcart Trail" (1954)—he moved west over the course of his career. Invited in 1938 to establish a writing school at Augustana University, in South Dakota, Krause ultimately sought to define the contours and characters of the American West. In his writing and teaching, he extolled “the vastness and the richness of the land, the leveling of democracy, the freedom of action and the independence of the spirit.”

Patrick Hicks, who here introduces a new generation of readers to "The Thresher," is successor to Herbert Krause as Writer-in-Residence at Augustana University. He is the author of "The Commandant of Lubizec: A Novel of the Holocaust and Operation Reinhard" (2014), as well as six poetry collections, including "Adoptable" (2014) and "This London" (2010). He is also the editor of "A Harvest of Words" (2010), a collection of contemporary South Dakota poetry published by the Center for Western Studies with support from the National Endowment for the Humanities. Hicks’ collection of short stories, "The Collector of Names," was published in 2015, and he is currently at work on a new novel.