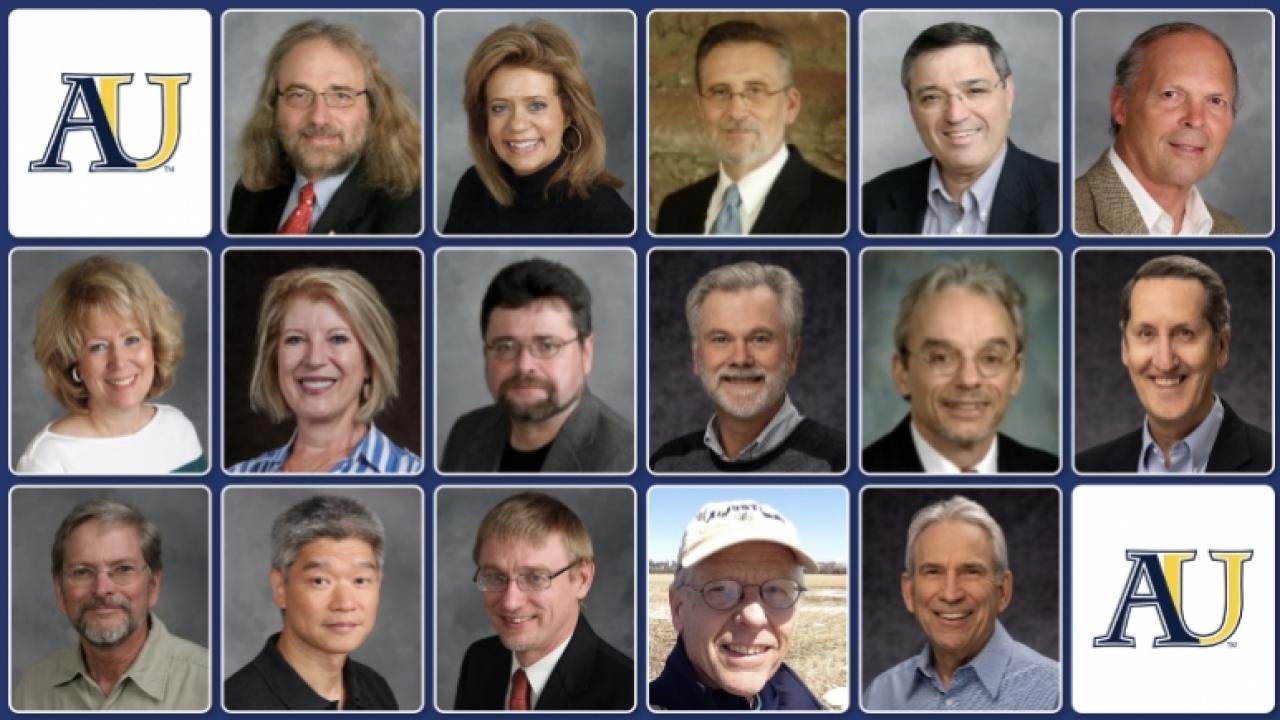 Augustana University's most recent faculty retirees made an impact on the hearts and minds of our students and all those blessed to be part of the campus community. They encouraged questions and inspired curiosity. They challenged students to stretch themselves as they boldly pursued their dreams — achieving and experiencing more than they ever imagined. As mentors and advisors, they provided invaluable wisdom and insight as they helped students discover how their gifts could serve to meet the world’s needs.

Their impact is lifelong. Their legacy of teaching excellence continues.

Dr. Rich Bowman, professor of religion, retired after 40 years of teaching and service. Bowman has a Ph.D. in biblical studies from Union Theological Seminary in Virginia. In addition to the freshman introductory course in religion, he taught courses in the Hebrew prophets and wisdom literature, seminars on Hebrew narrative literature and hermeneutical methodological traditions. His interest in theology and popular culture has produced courses on the detective story and the history of baseball. During his time at Augustana, Bowman served as chair of the Department of Religion, Philosophy and Classics, chair of the Humanities Division and was the recipient of the Carole Bland Cultivating Faculty Excellence Endowment (2015-16), Our Savior's Lutheran Church Chair in Religion (2015-18), Clara Lee Olson Endowed Chair in Christian Values (2011-14) and Stanley L. Olsen Chair of Moral Values (2007-10). Bowman’s red shoes will be impossible to fill.

Dr. Brian Eggleston, associate professor of economics, retired after 32 years of teaching and service. Eggleston received his Ph.D. from Washington State University in 1991. He came to Augustana in 1988 after being discovered by former professor Ken Bauge at the American Economic Association meeting in Chicago in 1987. He became the chair of the department in 1993. His courses included Principles of Economics, Intermediate Macroeconomic Theory and History of Economic Thought & Methodology. Eggleston’s scholarly interests generally reflect fundamental methodological concerns. He is a member of the Association for Evolutionary Economics and the History of Economics Society.

Dr. Murray Haar, professor of religion and Jewish studies, retired after 43 years of teaching and service. Haar earned a bachelor’s degree from North Dakota State University, master’s degree from Luther Theological Seminary and Ph.D. in Biblical Studies from Union Theological Seminary in Richmond, Virginia. He taught courses dealing with the Holocaust, Judaism and Islam, Hinduism and Buddhism, religion, violence, courage and evil. Haar also taught Hebrew and Jewish philosophy. He has also led study abroad courses in Israel and India. Among his fondest memories — teaching a Capstone course about courage and evil with Dr. Peter Schotten and Dr. Sandra Looney for 20 years. During his time at Augustana, Haar served as the chair of the Department of Religion, Philosophy and Classics, chair of the Humanities Division, interim vice president for Academic Affairs & Dean of the College (2011-12), Stanley L. Olsen Chair of Moral Values (1990-93) and as Our Savior’s Lutheran Church Chair in Religion (2018-21). He received the Frederick C. Kohlmeyer Distinguished Teaching Professorship (2000-02) and earned the Vernon and Mildred Niebuhr Faculty Excellence Award (2005-06). This lifelong learner has an academic plan for his retirement, which includes work on a book. We hope he enjoys more time listening to music, watching old movies and Yankees and Twins baseball, as well as playing Scrabble with his wife.

Dr. Perry Hanavan, assistant professor of education, retired after 45 years of teaching and service. Hanavan received his Bachelor of Arts in psychology and audiology; Master of Arts in audiology from the University of Northern Colorado and Doctor of Audiology (Au.D.) from Central Michigan University. Hanavan taught numerous graduate and undergraduate workshops on technology applications in the classroom. He also taught Logo — an educational programming language — in elementary schools and tech camps and served on school district technology committees. In retirement, Hanavan is collaborating on research and policy development regarding agricultural practices that capture and/or restore greenhouse gases.

Cheryl Jackson Nelson retired after 23 years serving as an instructor in the English Department. Jackson Nelson received a bachelor’s degree in English and a master’s degree from Sioux Falls College. During her years at Augustana, she taught freshman composition, The Literary Experience, Later World Literature, English Grammar, the First-Year Seminar Crimes, Cops and Culprits and the interim course Before CSI: The Criminal Element in Literature and Film. Jackson Nelson and Nancy Dickinson, retired director of the Writing Center, developed curriculum for and taught in the college preparatory program START for several years.

Dr. Jaciel Keltgen, assistant professor of business administration, retired after 22 years of teaching and service. Keltgen earned her Bachelor of Arts and master’s degrees from South Dakota State University, and Ph.D. from the University of South Dakota.Keltgen taught a variety of popular marketing-related courses, and her students engaged in real-world marketing opportunities with local businesses and non-profit organizations. Keltgen was highly successful in coaching students competing for annual Sales & Marketing Executives scholarship awards. She has won state and national advertising awards herself and was the recipient of the 2012 YWCA Tribute to Women Award. She was instrumental in designing and launching Augustana’s MBA program. Keltgen’s research has focused on job satisfaction among physicians, social media and marketing, as well as generational patterns in the workplace. In retirement, she will enjoy time with her grandchildren, writing, interior and landscape design and mentoring with EmBe’s Dressed for Success program.

Dr. Loren Koepsell, assistant professor of business administration, retired after 32 combined years of teaching and service. Koepsell ‘98 earned his bachelor’s degree in accounting from Augustana and MBA from the University of South Dakota (USD). He earned his Ed.D. from USD. Koepsell taught computer science as an adjunct professor at Augustana and provided leadership in the administration from 1988-2007, serving as chief financial officer from 2001-07. He returned to Augustana in 2014 to teach in the Business Administration Department. During his time, Koepsell also served a 1-year term as department chair. He was the recipient of the 2019-20 South Dakota CPA Society Outstanding Educator Award. Koepsell currently serves as vice president of Project Finance at Lloyd Companies.

Dr. Stephan Lhotzky, professor of German, retired after 33 years of teaching and service. Lhotzky received his Ph.D. from the University of Colorado and joined the Augustana faculty in 1987. His primary expertise is German Romanticism. Additionally, the German native established the sister-cities relationship between Sioux Falls and Potsdam, Germany, including the exchange program between Augustana and the University of Potsdam.
Sam Ogdie retired after serving 24 years as a Spanish instructor. Ogdie earned his Bachelor of Arts from Augustana in 1972 and master’s degree in selected studies from the University of South Dakota. He taught courses in Intermediate Spanish, Spanish for Medical Professionals and an Education 310 class in Secondary School Methods for World Language Teachers. During his time at Augustana, Ogdie, along with his wife, Cathie, guided more than 20 study away courses to Spain, Morocco, Chile, Brazil and the pilgrimage of Santiago de Compostela. In 2002, he received The U.S. Department of Education Teachers Recognition Award in Washington, D.C. His plans for retirement include travel, spending time with family and grandchildren, selling homes and working on Model A Fords.

Dr. John Pennington, professor of music and percussion instructor, retired after 12 years of teaching at Augustana. Pennington earned his Bachelor of Music from the University of Arizona, Master of Music from the University of Michigan and Doctor of Musical Arts from Arizona State University. His fondest memories at AU are his 10 years working alongside Dr. Sandra Looney and teaching their course in India. He also fondly recalls his collaborative work with Dr. Richard Swanson and the 2011 International band tour to Egypt when the Arab Spring began.Pennington is proud of the three recordings he created with the Augustana Percussion Ensemble, and the DVD with the Augustana Choir and the Oratorio, the Song of Luke, with South Dakota Public Broadcasting. Pennington was the recipient of the Granskou Award for Professional Development (2017-18) and Carole Bland Cultivating Faculty Excellence Endowment (2009-10, 2013-14).

Dr. Steve Shum, associate professor of computer science, retired after 34 years of teaching. Shum received his Ph.D. in computer science from Oregon State University. During his years at Augustana, Shum taught courses in Computer Science II, Programming Languages, Java Programming, Data Structures and Algorithms, JavaScript Programming, Theory of Computation, Software Engineering and Windows Programming. On his 30-year teaching anniversary, his students surprised him with a cake, written in Java! Retirement will bring a time for him to learn how to play the piano.

Dr. Tim Sorenson, assistant professor of mathematics, retired after 30 years of teaching and service .Sorenson received his Ph.D. from Kent State University. He taught a wide variety of courses in mathematics, as well as interim courses in international relations and genealogy research. His research focused on abstract algebra. This enthusiastic bridge player is sure to now enjoy more time in competition.

Dr. Craig Spencer, professor of biology, retires after 29 years of teaching and service. Spencer received his Bachelor of Arts from Colby College in Maine, as well as a Master of Science and Ph.D. from Michigan State University. He spends summers conducting research at the Flathead Lake Biological Station in Montana, in which students are able to get involved. He also led a study away interim course to Guatemala and Belize with Dr. David O’Hara. A leader in sustainability efforts, Spencer began working with local artisans in Guatemala making beautiful jewelry from a forest vine, called the Maya Cross Project. He was awarded the Orin M. Lofthus Distinguished Professorship (2013-16). In retirement, Spencer and his wife, Suzy, plan to spend more time with their children and look forward to teaching their grandchildren the finer points of fishing, huckleberry picking, guitar playing and s’mores roasting in Montana and South Dakota.

Dr. Steve Van Bockern, professor of education and special education, retired after 37 years of teaching and service. Van Bockern earned his Bachelor of Arts from Augustana in 1973, as well as his Master of Arts and Doctor of Education from the University of South Dakota.Van Bockern has been a teacher and principal. He has directed programs and grants for talented and at-risk students, funded by the National Science and Kellogg Foundations. He ran Super Saturdays and Summer Scholars for K-12 students for a number of years. With Dr. Laurie Wenger and other Sioux Falls colleagues, Van Bockern  created the Challenge Center, and along with Drs. Larry Brendtro and Martin Brokenleg, he co-authored the book Reclaiming Youth at Risk: Our Hope for the Future. In 1997, he helped create the non-profit organization Reclaiming Youth International. Van Bockern works in juvenile justice as an expert witness. His research interests include alternative education and creating well-being in school settings. In 2018, his book Schools That Matter: Teaching the Mind, Reaching the Heart was published. Van Bockern is a recipient of the Crazy Horse Award and an honorary Doctor of Law from the University of Winnipeg.