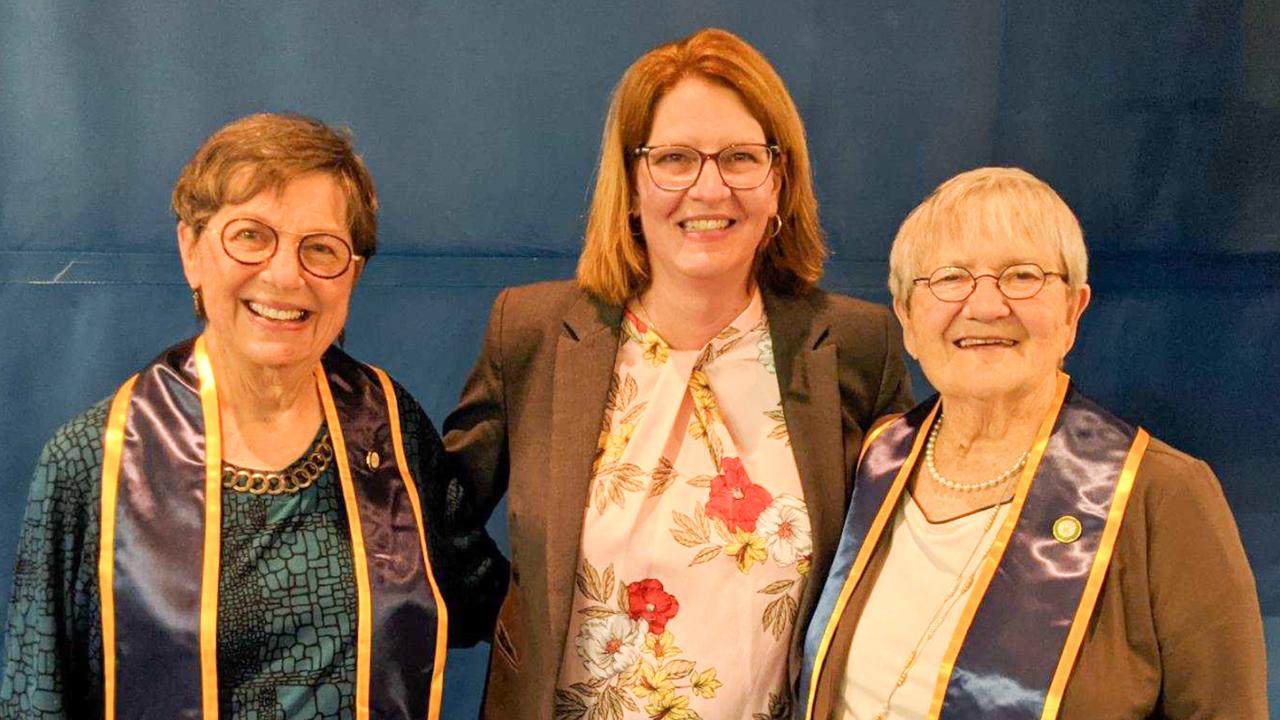 Drs. Joyce and Margot Nelson were named recipients of the DAISY Lifetime Achievement Award — a first for Augustana.

The award, created by the DAISY Foundation, recognizes nurses who have devoted their life's work to the compassionate care of others. To be considered for the award, individuals must meet a number of criteria, such as 25-plus years of service, a distinguished nursing career and recognition from the broader nursing community.

Combined, Joyce and Margot served Augustana and its nursing department for more than 74 years. Joyce started in 1967 and retired in 1996. Margot started teaching in 1969, retired in 2012, and then came out of retirement to teach during the 2018-19 school year.

Despite dedicating decades of their lives to Augustana, Joyce and Margot said they were both stunned when their names were called to receive the DAISY Lifetime Achievement Award at Augustana’s Nurse Pinning Ceremony on May 21.

“I think we were both completely nonplussed,” Margot said. “I knew Joyce was getting one because I had been tasked with getting her to the pinning ceremony where this award would be given. And, of course, I just about had to drag her. But, I had no clue there was going to be a second one.”

“And I thought, ‘I'll bet Margot's getting an award,’” Joyce added. “Augustana nursing had just gotten this fabulous accreditation, and she had helped to edit the report. I mean, this woman can do five things at the same time. God's working through her.”

Along with surprise was gratitude to be recognized by a department they both poured their hearts and souls into.

“It was humbling,” Margot said. “I mean, standing up there with Joyce Nelson. It’s a wonderful affirmation, surely, of colleagues’ and students’ respect for what I’ve done.”

“Twenty-six years after I retired — I couldn't believe it. I thought something was awry,” Joyce joked.

The Nelsons, who are not related, are both alumni, although Joyce’s education came from a triad of schools — South Dakota State University (SDSU), Sioux Valley Hospital School of Nursing and Augustana. Joyce and Margot graduated in 1956 and 1967, respectively. After college, Margot worked as a nurse at Pioneer Memorial Hospital in Viborg, South Dakota, and McKennan Hospital, now Avera Health, before Joyce recruited her to join Augustana’s faculty.

“Augustana needed someone part time as a clinical instructor,” Margot said. “And, so I started doing that; I had my feet in both worlds for a long time. I was working mostly at McKennan Hospital and teaching part time at Augustana, and then the ratio sort of shifted. So, I was mostly at Augustana and just working in the hospital on vacations and weekends.”

For Margot, though, becoming a professor didn’t mean giving up nursing. She felt like she practiced nursing her entire career while guiding students.

“As a practicing nurse, I mentored a lot of new hires and students, and I found that very fulfilling,” Margot said. “And, I thought, ‘OK, I can be a really fine practitioner, and I can spread that a little bit in my practice setting. But, if I did take the bait and go into education, I could spread it further. You know, that would create more branches.’ So, I guess that was really the inspiration.”

Joyce was an assistant professor of public health nursing in Nebraska before joining Augustana’s faculty, where she integrated concepts from public health science and nursing to develop courses and supervise clinicals essential for national accreditation.

“One thing I learned was that when you're trying to teach a student to give someone a shot, you don't line up everything and do everything systematically,” Joyce said. “Their greatest fear is poking. So, I would set the shot up and say, ‘Come on, let's get this over with.’ Take them over their greatest fear first.”

Margot taught adult health, health assessment and research courses at Augustana. Joyce also credits Margot with bringing a focus on technology into the classroom. When students worked with simulated models, professors would bring in cameras to film the students.

“They would play them back, and the students would see themselves,” Joyce said.

“And, they would identify where they did something well and where they missed something or broke sterile technique, for example,” Margot added.

During their time at Augustana, Joyce and Margot, who both served as chair of the nursing department, received their doctorates from other universities.

“We had a departmental goal that everybody who teaches here has a doctorate,” Joyce said. “And, it meant that we had to all step up to the plate and maybe do more than our contractual agreement. But the faculty were awesome to pick up the slack.”

Joyce and Margot have made an incomparable difference in the lives of many students and colleagues, but for both women, they remembered a time when they weren’t sure if they would go into the health care field.

“I came to Augustana actually thinking about biology or pre-med,” Margot said. “But my advisor, a man who shall remain nameless, said to me — and, at that point, there were very few women going into medicine — he said, ‘Oh, Margot, you don't want to do that; you will be such a minority.’ And I listened to him. I mean, for goodness sake, I was 19 years old. But, by default, I have never regretted that.”

Joyce faced the same discrimination after expressing her desire to pursue law or mathematics. And then, she discovered Augustana.

“I found this brochure at a Bible camp, and it was from Augustana,” Joyce remembers. “It said, ‘All this and nursing too.’ And, it was a picture of a woman with a mortar board and a nurse uniform. That picture really did something for me. So, I was Augustana bound.”

Returning to Augustana as faculty was like coming home for Joyce and Margot, who have been friends since they began teaching together in 1969.

“Augustana has provided my roots. It feels like home because I've spent so much of my adult life very connected to Augustana, and it’s a big part of who I am,” Margot said. “I'm so proud of what Augustana has accomplished. And, of course, particularly the nursing department. And I am especially proud of some of the innovative things that the faculty have done.”

“I feel like, at Augustana, we're stronger than just a group of people who came together — but we're working on the same mission and wanting the same thing for every student, but in a different way,” Joyce said. “We’re not cookie cutter, but what we would say is we’re like family in that we take you in.”

“I think the difference for me was that you weren't just a faculty member for the hour you had a lecture,” Joyce continued. “You were there to, as the philosophy says, help prepare young men and women for a life of Christian service. And, I think that our faculty really does that.”

Margot said her favorite part of teaching was seeing her students’ ‘aha’ moments and watching them rise to impressive careers.

“Joyce had a phrase; she'd say, ‘Our role as faculty is to prepare students to stand on our shoulders.’ In other words, to go beyond where we are,” Margot said.

This is not the only “Joyce-ism,” as Margot called them, that she still remembers.

“Students came back years and years later, and they would spout these little Joyce-isms, like, ‘Begin with people as they are in the situation as it is. Or, the family is the unit of service,’” Margot remembered. “And, the one I really love was, ‘If you want to learn to control the mosquito, you have to think like a mosquito.’ I think some of those Joyce-isms really informed who they became as nurses.”

Joyce and Margot’s Augustana legacy reached past their students and into their families. Margot’s son attended and her grandson graduated from Augustana, and Joyce watched her brother, daughter, son-in-law, nephews and grandsons graduate from AU. Joyce’s late husband, Dr. V.R. Nelson ‘44, served Augustana for more than 50 years as a beloved physics, mathematics and aeronautics professor.

As for Joyce and Margot, even though it’s been several years since they were practicing nurses, they said they’ve never lost that feeling.

“I think a lot of us would say once a nurse, always a nurse,” Margot said. “Whether it's for your family or your neighbor or just in the way you look at the world.” 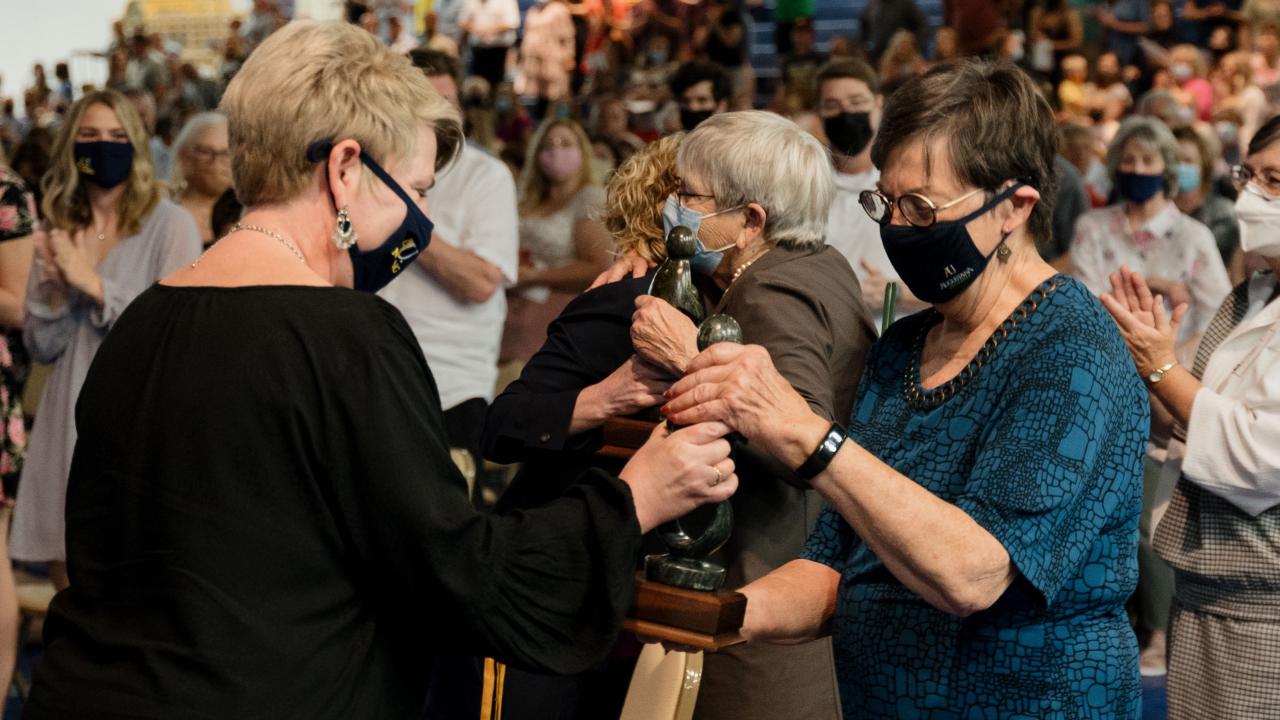