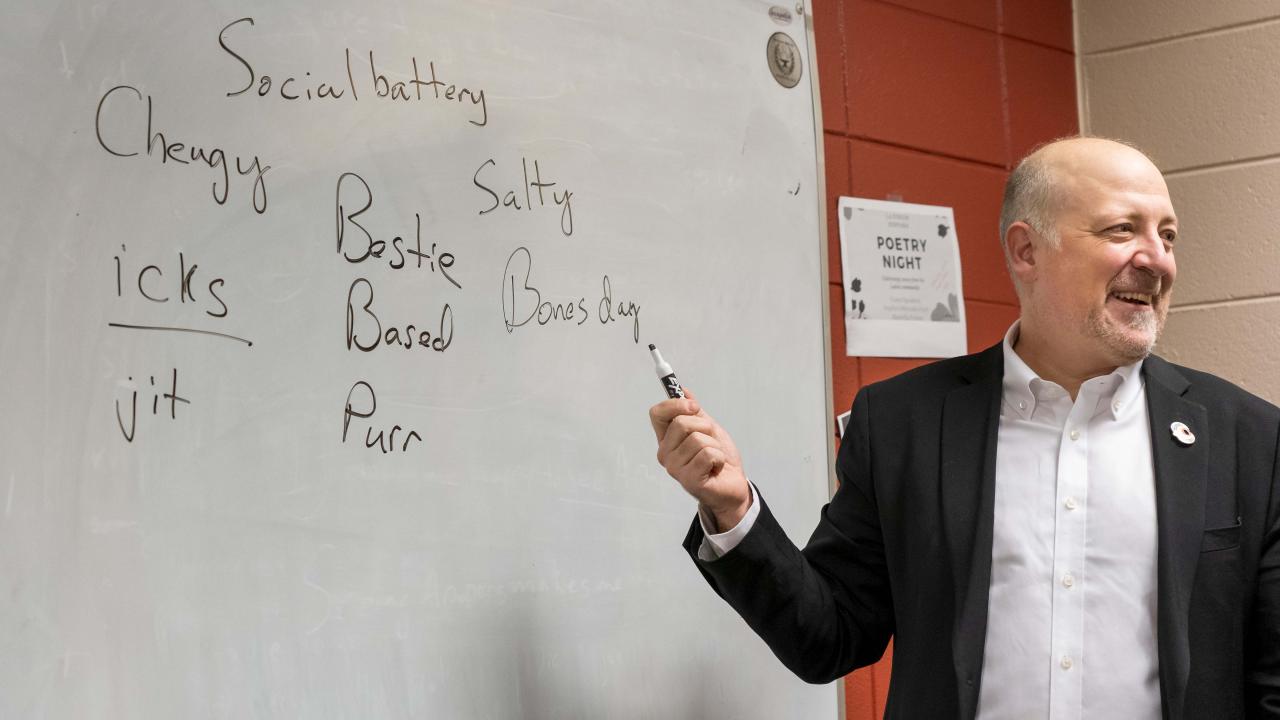 Professor of English Dr. Daniel Gerling discovered a new way to get his students engaged in the English language — by collaboratively creating a class dictionary, complete with slang words and phrases and emojis to demonstrate how language changes over time.

The idea behind the dictionary came from a quiz that Gerling’s first-year seminar (FYS) students created for him that was full of these slang words and emojis.

“I failed miserably,” Gerling laughed. “Then I thought, ‘We should compile a dictionary,’ because one of my philosophies is that every student that comes through here leaves a mark on Augustana, and it's not always so palpable. The mark they leave happens in little ways, too.”

“My classmate Shelby (Scott) and I typed up all the words that we talked about in class or thought of on our own,” Camryn Van Nieuwenhuyzen ‘25, one of Gerling’s students, said. “Then, we added our own definitions. We added words we heard on social media, such as TikTok or Instagram. The interesting part was seeing how our unofficial definitions described the words.”

Many of the entries were ones Gerling had never heard before, like “Tarbucks” as in a Starbucks located in a Target. Some entries are old slang words that have made their way back into youth vernacular, such as “buggin,” which means acting crazy or “electric,” which means something that’s cool. Gerling said some entries came from viral TikToks like “bones day,” which references a popular video about a pug. Others are from video games, such as “press F to pay respects,” which is used when something bad happens.

“From one year to another, a phrase or emoji can mean something completely different,” Gerling said. “Language changes so fast; I think that’s thrilling. And, youth culture is where so much of that change happens.”

Shelby Scott ‘25, another student in the class, said that she was surprised to learn how quickly slang can leave a dialect.

“Slang used a year ago is outdated now,” Scott said. “The next class that does this will see words in our dictionary and think that we’re old or that our words are out of date.”

Both Scott and Van Nieuwenhuyzen said it wasn’t just the dictionary, but the FYS course as a whole that changed their perspective on language and how it’s used. The course examines sociolinguistics — the history of English and discourse analysis.

“We're essentially looking at the way that language is being used — not only in the academy, but on social media, in the dorms and on the street,” Gerling said. “We're also challenging this notion of standard written academic English, which is the style that students are expected to learn and master in college.

“Whether you come from a farm in rural South Dakota, the Twin Cities or another country, we all have our own dialects, and they are all legitimate. The dialect of standard written academic English is just another one. It doesn't necessarily communicate ideas better, but it's one communal dialect that we are learning. And, learning the story of that is fascinating.” 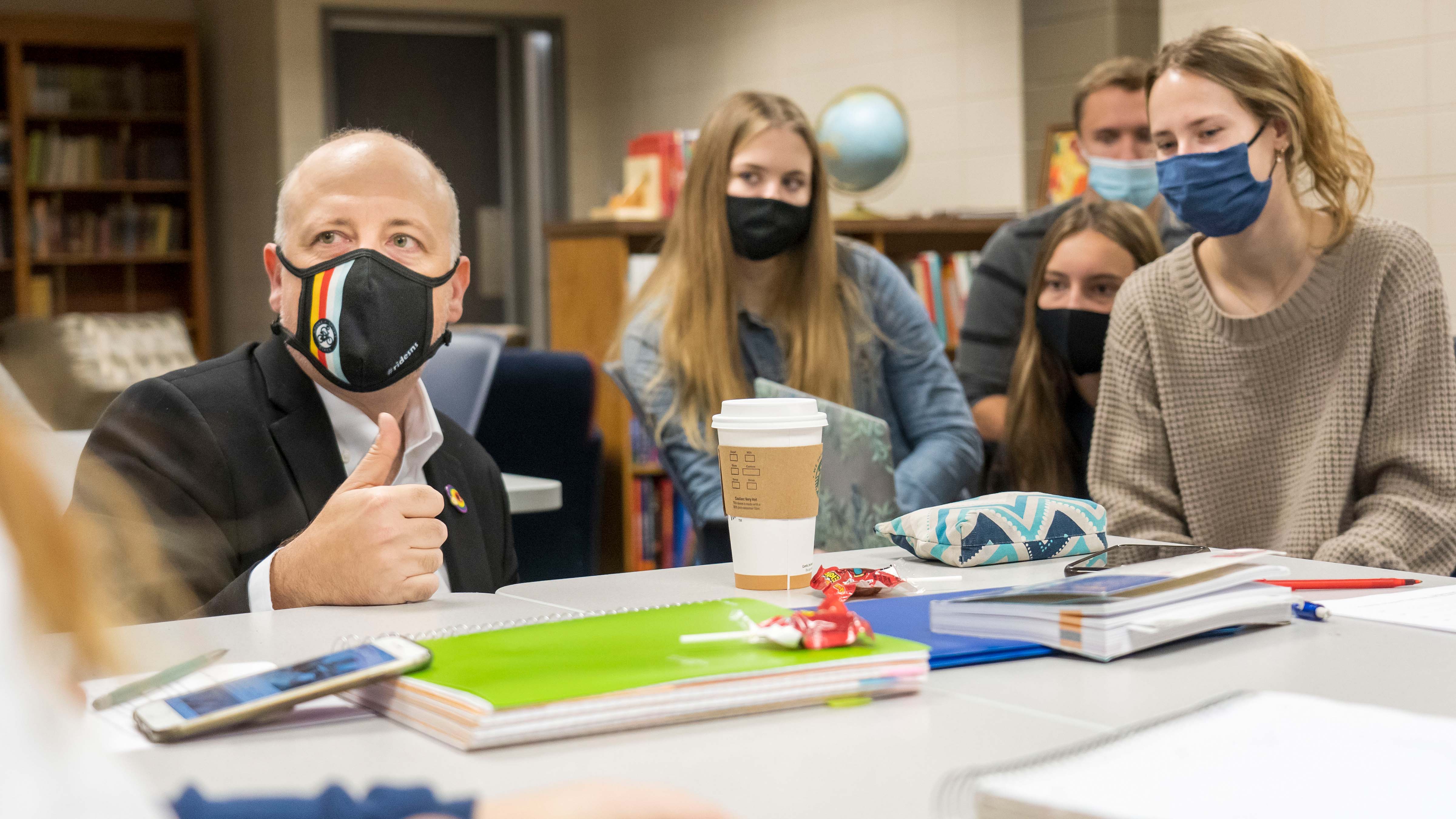 Gerling said the importance of the course stems from the notion that “perfect English” does not exist and that language is never static, despite occasional resistance.

“Some people claim that emojis are corrupting or degrading language,” Gerling said. “But, I don't think that's true at all. I think emojis are this wonderful addition to language that allow for written language to have the same sort of effect as spoken language. I can't gesture, for example, when I'm writing, so an emoji can function as a gesture or facial expression.”

Gerling plans to add on to this slang dictionary each year with his FYS classes, allowing them to annotate this year’s words with updated definitions and add new phrases or emojis.

“I think it's important for students to recognize they are agents of change in the way they use language,” Gerling said. “It contributes to society in ways that are perhaps subtle, but very meaningful.”

With this dictionary and his course, Gerling said he works to dispel the myths of a “super snooty English professor that corrects everyone’s grammar” and intimidation that first-year students might feel encountering college professors for the first time.

Gerling’s class said he succeeded in doing just that.

“Our dictionary and Dr. Gerling’s class truly showed me that college is such an accepting and fun environment,” Van Nieuwenhuyzen said. “Saying what you mean without having to filter out descriptive adjectives or words you would use around your friends is important. Dr. Gerling makes his students feel at home.”

For more information about FYS courses at Augustana, visit augie.edu/FYS.