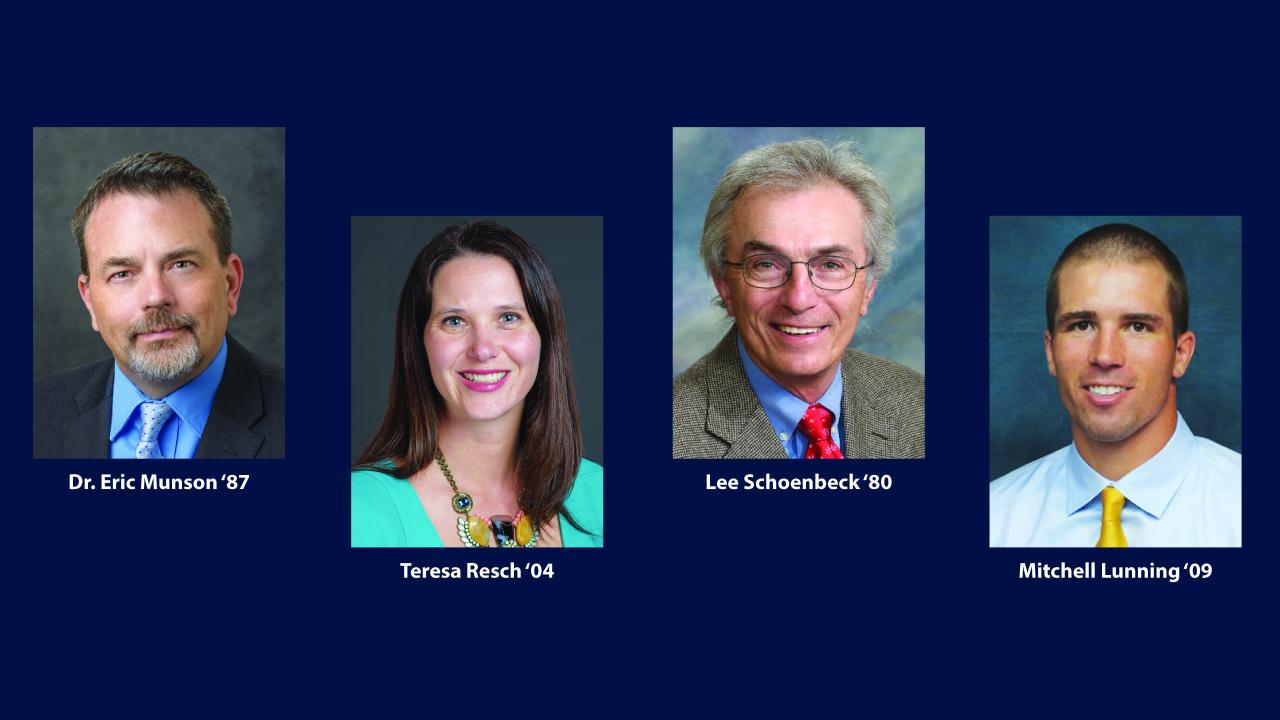 Each year, Alumni Achievement Awards are presented to Augustana University alumni who have made outstanding contributions to their fields of endeavor, communities and/or churches. The Horizon Award recognizes young alumni who have graduated within the last 15 years and quickly demonstrated outstanding vocational achievement and provided faithful service to their community and/or church. Recipients of both awards must exemplify one of the shared core values of the university: Christian faith, liberal arts, excellence, community or service.

Dr. Eric Munson ‘87 is the head of the Department of Industrial and Physical Pharmacy at Purdue University in West Lafayette, Indiana. The chemistry and physics major followed in the footsteps of his parents, Don '59 & Julie (Morstad) Munson '60, in graduating from Augustana. After studying on a Fulbright Fellowship in Munich, Germany, Munson earned a Ph.D. from Texas A&M University in 1993, and was a postdoctoral fellow at the University of California, Berkeley in 1994. He then taught in the chemistry, pharmaceutical chemistry and pharmaceutical sciences departments at the Universities of Minnesota, Kansas and Kentucky, respectively. Munson is a co-inventor on two patents and has published more than 100 research, review and book chapters. Munson has twice served as chair of the faculty committee for the National Institute for Pharmaceutical Technology and Education (NIPTE), is active in the American Association of Pharmaceutical Scientists (AAPS) and serves on the Council of Experts for the United States Pharmacopeia (USP).

Teresa Resch ‘04 is the vice president of basketball operations for the Toronto Raptors — responsible for team operations staff and a liaison between basketball and business operations. After graduating from Augustana, the Viking Volleyball all-conference student-athlete earned an MBA in sports administration from St. Thomas University in Florida. She began her career as an event intern at Disney’s Wide World of Sports Complex, and later served the NBA League Office in various roles, where she assisted in the operations of the Basketball Without Borders Camp, established the first camp to feature women campers and was involved in the expansion of NBA’s relationship with the U.S. Department of State’s SportsUnited Program. Prior to joining the Raptors, Resch served as the Ultimate Hoops National Basketball Operations manager for LifeTime Fitness. She initially joined the Raptors as its director of basketball operations & player development. Resch has played instrumental roles in overseeing plans for the team’s new practice facility, launching Raptors 905, its G-League affiliate, and transitioning the Raptors to Tampa, Florida, for the 2020-21 season.

Mitch Lunning ‘09 is the director of Avera Sports Kairos Volleyball. The Viking Wrestling alumnus graduated with a Bachelor of Arts in business administration and computer information systems. After Augustana, he served as a financial advisor at Waddell & Reed Financial and volleyball coach with Sioux Empire Volleyball Club. Lunning returned to his alma mater for two seasons as a volunteer assistant coach for Augustana Volleyball. In 2012, he founded Kairos Elite Volleyball Club in Sioux Falls — a nationally-recognized brand with teams that have won six Amateur Athletic Union (AAU) national championships, garnered 37 All-Americans, 18 top-5 finishes and have had 92 alumni play collegiately. Kairos merged with Avera Sports in 2014, and is now based out of the Avera Human Performance Center in Sioux Falls, and works with athletes from South Dakota, Minnesota, Iowa and Nebraska. In 2016, Lunning received the American Volleyball Coaches’ Association’s Thirty Under 30 Award. Lunning and his wife, Lisa (Hoegh) ‘09, have three children.