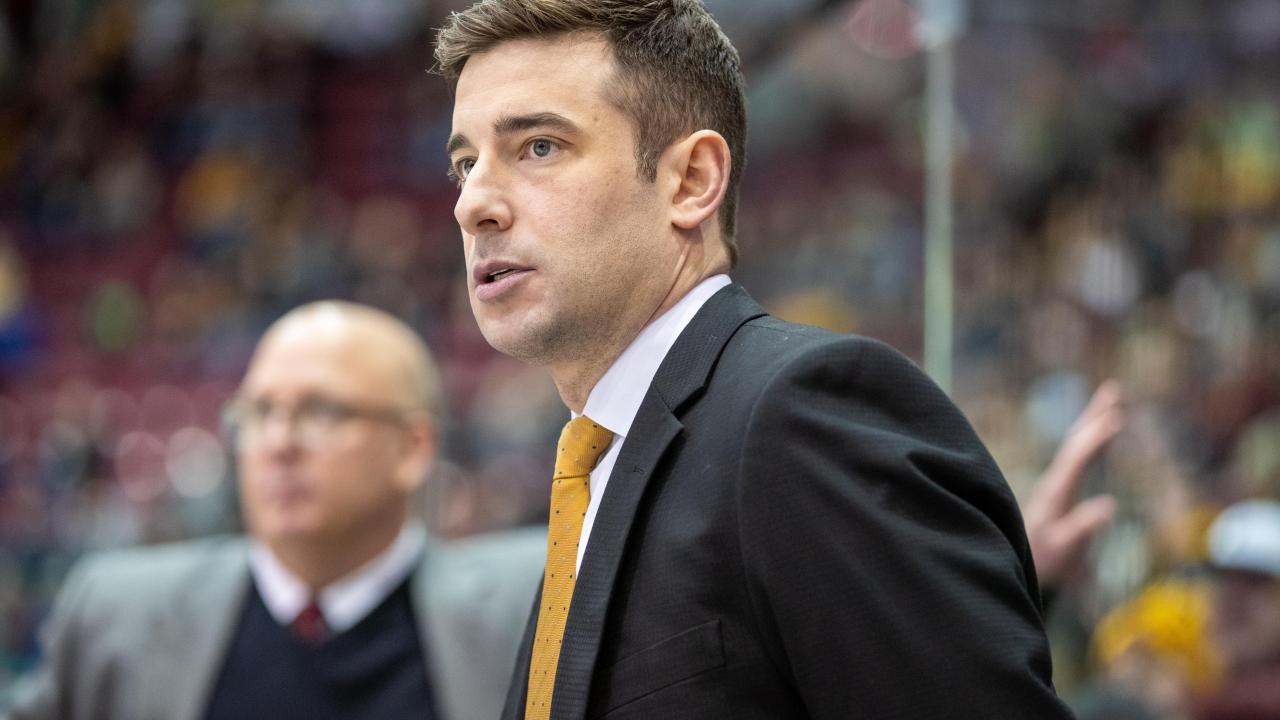 The Augustana University Men’s Hockey Program has its first-ever head coach. Garrett Raboin, assistant coach for the University of Minnesota of the Big Ten Conference, has been selected to be the inaugural head coach of the Viking Hockey Program — set to take the ice in the 2023-24 academic year.

“This is a great day for Augustana University and an incredibly important step in the launch of Viking Hockey,” said Augustana President Stephanie Herseth Sandlin. “Garrett Raboin brings a passion for the game and genuine enthusiasm for the broader vision that will be energizing for all of us as we build toward our first year of competition in 2023. We are thrilled to welcome Garrett, Emily and their children to Augustana and the Sioux Falls community.”

“We started this process looking for someone who can build a nationally competitive men’s hockey program that competes at Division I and we sure found him,” Morton said. “Garrett is a proven winner, excellent recruiter and will help us build community excitement for Augustana Hockey. He is a great addition and will add to the excellence of Augustana athletics.”

Raboin will be introduced at a press conference Tuesday, April 19, at 2 p.m., inside the University Welcome Center on Augustana’s campus. The press conference is open to the public and will be live-streamed on the Augustana Athletics YouTube page.

The 2021-22 season saw Raboin tutor Ben Meyers who was a finalist for the Hobey Baker Memorial Award, given annually to the nation’s best hockey player. Meyers was also named the Big Ten Player of the Year. In addition, Colin Schmidt was named the NCAA Elite 90 Award recipient for being the top student-athlete at the NCAA Championship.

In 2020-21, Minnesota led all of NCAA Division I with 24 wins and earned its first No. 1 national ranking in six years. The Gophers also claimed their first NCAA Tournament victory since 2014.

In his four years at Minnesota, Raboin mentored five AHCA All-America recipients while reaching the NCAA Postseason twice (with a third year wiped out by COVID-19).

In the classroom, the Gopher Hockey Team posted its highest cumulative GPA in program history under the watchful eye of Raboin, while there were a program-record 19 Academic All-Big Ten selections in 2020-21.

In his six years with the Huskies, Raboin helped St. Cloud State to five NCAA tournament berths, including a Frozen Four appearance in 2013. The program also claimed three regular-season conference championships, including the 2017 NCHC Penrose Cup.

In addition to his collegiate coaching experience, Raboin has served on USA Hockey coaching staffs for a number of development camps.

“I am incredibly humbled and honored to have been chosen as the first leader of Augustana Men’s Hockey,” Raboin said. "This is the right time, at the right university, with the right leadership, to bring Division I College Hockey to South Dakota.

“My family and I are excited to become a part of the Sioux Falls community, we can’t wait!”

Raboin is a 2010 graduate of St. Cloud State where he capped his college career as a Lowes Senior Class All-American. He was a 3-year captain for SCSU and led the team to three NCAA Tournament appearances. He was a 2-time All-WCHA selection. He concluded his career ranked fourth all time at St. Cloud State in defensive scoring with 83 points (21 goals, 62 assists).

He earned his bachelor’s degree in special education and was a 3-time WCHA All-Academic Team honoree.

Prior to his time at St. Cloud State, the Detroit Lakes, Minnesota, native skated with the Lincoln Stars of the USHL, then played professionally in Europe for two seasons before joining Motzko’s staff at St. Cloud State.

Submissions are being accepted for the Augustana Hockey season ticket interest list. Fans interested in season tickets are encouraged to submit their contact information and desired number of tickets in the form provided at goaugie.com/HockeyTickets.

What Others are Saying About Garrett Raboin

“Garrett Raboin is one of the true rising stars in the hockey world, and Augustana made a terrific choice in selecting him as the first head coach of the Vikings Hockey Program. I have known Garrett for close to 20 years, and I have an immense amount of pride and respect for the coach and person he has become. He has built a remarkable path as a leader, teacher and recruiter at St. Cloud State and now at Minnesota, and it's certainly special to see his dedication and hard work culminate now with his first head coaching position at Augustana.

“As a player and a coach, Garrett has earned the respect of everyone he has worked with in the hockey world, and he has given that same respect right back. He is a man of the strongest values, and I can't think of anyone better suited to lead Augustana's Hockey program on and off the ice.” — Bob Motzko, University of Minnesota Head Coach, 2-Time Big Ten Coach of the Year

“First off, I’d like to congratulate Rabs on the hire. I can’t think of anyone better and more qualified to take the position. He has all the tools to be an excellent head coach. I spent two years with him as a player at St. Cloud State when he was my assistant coach. That staff did an amazing job for our team.

“Rabs was the guy everyone felt comfortable around. You could go to him about personal things, non-hockey related, knowing that he has your back through it all. I think as a coach, he did amazing things for me, but off the ice was just as important. I think that’s what separates good and great coaches. In my opinion, Garrett has an opportunity to be a great coach. Augustana is lucky to have a guy like him!” — Ryan Poehling, 3-Year NHL Veteran with the Montreal Canadiens, All-NCHC at St. Cloud State

“Coach Raboin is one of the hardest working and passionate coaches I have ever played for. His commitment to success is inspirational to all players that he coaches.” — Ben Meyers, 2022 Hobey Baker Award Finalist at the University of Minnesota, Rookie for the Colorado Avalanche