The Power of Dialogue: Augustana Peace Scholars Bring New Skills Back to Campus 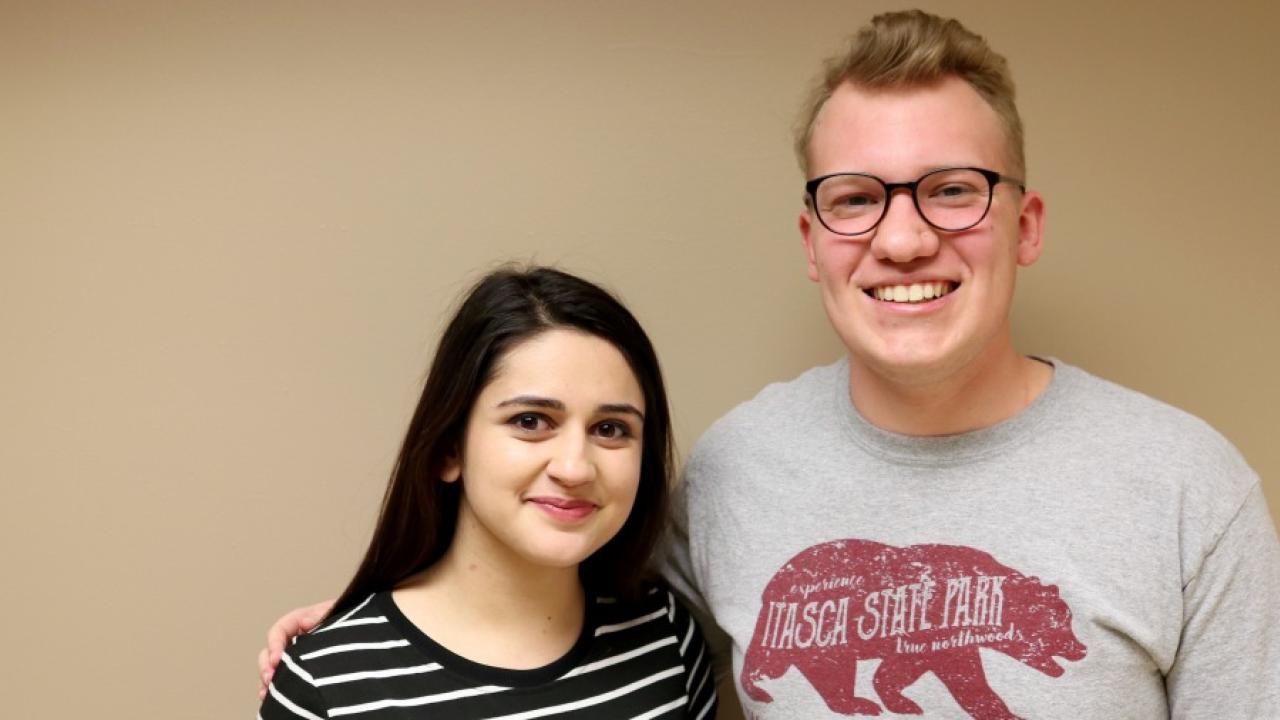 Last spring, seniors Chofian (JuJu) Abobakr and Ryan Solberg were selected to participate in a one-of-a-kind program organized by the Nobel Peace Prize Forum consortium. After spending most of their summer in Norway, Abobakr and Solberg are ready to bring their experiences back to the Augustana community.

An Impactful Week in Lillehammer

On June 15, the program started in Lillehammer at the Nansen Center for Peace and Dialogue with intense training in key elements of peace-making.

“Nansen is a school dedicated to researching and teaching about issues of peace, dialogue, democracy and anti-authoritarian ideologies,” says Solberg. “There we learned about dialogue and conflict transformation, using conversation as a way to bring parties in conflict together to achieve a peaceful outcome.”

The students at the Nansen Center included the 14 peace scholars from Lutheran universities and international students of all ages from various countries including Kenya, Georgia, Russia, Ukraine and Yemen. The experience immersed the Peace Scholars in the process of dialogue for nine hours a day.

“Dialogue itself is very different from debate. It doesn’t seek a solution or a right or wrong answer. It takes into consideration everyone’s point of view,” says Abobakr. “Something we said a lot in Norway is ‘Dialogue is a process.’ It’s good if you walk out confused, because your thinking is being challenged.”

In one common exercise, each group was assigned a controversial issue and required to come to a consensus without using democracy. “There was no moving on until everyone agreed,” recalls Abobakr. “We had this overwhelming urge to say, ‘let’s vote.’” But, like a jury, they had to reach a unanimous decision. In one group, the lone hold-out ended up bringing the rest of the group to their side of the issue. “You learn about yourself and your own values,” Solberg says. “It was a really good exercise in humility and being willing to admit when you’re wrong or that you’ve changed your position.”

“I learned to always provide space for dialogue in any room, any work environment, any classroom I’m in,” says Abobakr of the experience. “And to never suppress someone’s voice no matter how strongly I might disagree with them.” Over the course of the week, the Nansen group became very close. “Nansen provided us a space to be ourselves and share our own experiences,” said Abobakr. “At the end of the day, we were all family and friends because we understood each other.”

Abobakr and Solberg learned that dialogue reaches beyond politics and can truly be used in everyday life. While their training in dialogue gave them a head start, they believe anyone is capable of using dialogue. The first step is to “be open to new ideas, no matter what it is,” says Abobakr. Before visiting Norway, Abobakr experimented with dialogue for a project in one of her classes. For a semester, she had coffee with people she knew held different views than her. They set rules beforehand, then sat down and talked. She found the experience eye-opening and made friends even though they disagreed. She recommends that others experiment with dialogue, saying the key is to “be open-minded, practice active listening, and not be afraid of the other side.”

“It starts with self-reflection,” Solberg says. He urges people to think critically about their choice of news sources, pointing out that many news organizations seek viral quotes and headlines over understanding all sides of a controversial issue.

During his time in Norway, Solberg reflected a lot on the United States democratic process, including “the ways it has been poisoned and the ways it can be repaired.”

“We believe our democracy is based on debate,” says Solberg. “In the long run, that leads to a lot of division and partisanship and distrust. Really, our democracy should be increasingly based on dialogue and the ability to understand the other side, not just trying to refute what they’re saying. Without that kind of understanding and mutual respect, the tolerance that makes democracy possible will start to break down.”

After completing their week in Lillehammer, the peace scholars traveled to Oslo and began their classes at the International Summer School. They were required to take a peace seminar course designed specifically for the program where they talked about issues related to identity conflict, migration, sustainability, as well as conducting independent research.

Solberg’s research focused on Norwegian youth political party’s perceptions of NATO and how Norway’s NATO membership works with its self-conception as a peace nation.

Abobakr interviewed Turkish and Kurdish asylum seekers in Norway who have signed a peace petition calling for negotiations between the military and guerrilla groups in Turkey. “My focus was on the identity and ethnic conflict in southeast Turkey between the Kurds and the Turks and how that specific case has contributed to academic professionals using their voices and positions as community educators to speak up for Turkey's human rights violations.”

Each peace scholar chose one other class to take during their time in Oslo. Abobakr, a government, international affairs, and communication studies major, took a course on international politics. Solberg, a government and international affairs major, took Norwegian Welfare Politics. While the subject matter was unique to the International Summer School, Solberg felt confident the quality of the courses is just as high at Augustana. “Augustana has some of the best lecturers and teachers and professors around,” he says. In comparison, at the International Summer School, “the professor lectures ‘at you’ more than brings you along in the learning process.”

In addition to three hours of class each day, the peace scholars visited the Peace Research Institute Oslo (PRIO), the Fulbright Foundation, the Nobel Peace Center, the July 22 Museum (dedicated to the July 22, 2011 terrorist attacks in Norway), as well as several NGOs like the Norwegian Refugee Council and Norwegian People’s Aid.

While Norway is known for its peaceful ways, exploring the culture there made Abobakr and Solberg realize that every country has its struggles, and there is always work to be done to improve the lives of citizens in every country.

Working with the NGOs helped Abobakr redefine her aspirations. “The Peace Scholars program helps you build your confidence and plants the seed of ambition in your mind.” She had always thought she wanted to pursue a career in politics, but this experience helped her realize her role in the world is “finding solutions, emergency preparedness, and upholding humanitarian values,” says Abobakr.

For Solberg, it solidified his interest in international politics. “Meeting people who are documentary filmmakers about social justice or are lawyers in developing countries helping to develop the rule of law inspired me that individuals can make change and we can be a force for good in the world.”

What’s Next for the Peace Scholars

On October 28-29, the Peace Scholars attended the Human Rights Forum at Augsburg College in Minneapolis, along with Philosophy Professor Dr. Stephen Minister. On Friday, Nov. 22, they will be telling other Augustana students about their experience in Norway at the 4 p.m. Rendezvous.

Solberg and Abobakr have plans to set a new standard for Peace Scholar alumni by bringing what they have learned back to the Augustana. Promoting the Peace Scholar program’s values, they intend to organize “Dialogue Day” to facilitate discussion on controversial topics important to the future of the Augustana community. They also plan to put their Nansen Center skills and resources to use by developing workshops to teach others how to become dialogue facilitators.

In addition, they are hoping to create a “class in a box” that any professor could utilize in place of regular class for the day.

All Students Encouraged to Apply

Applications for 2020 are now sought and due Sunday, Feb. 2, 2020. Scholars will be notified by Friday, March 6, 2020, and presented at the Friday Rendezvous in the Back Alley.

While the Peace Scholar opportunity is limited to two students each year, making it ripe for competition, Abobakr and Solberg agree it is important to have diversity of thought in the applicant pool.

“Definitely apply. Your voice is needed. It doesn’t matter your major or your background. Everyone has a voice to bring to these critical discussions,” says Solberg.

“Don’t be afraid to apply,” says Abobakr. “Pay attention to what you want to do, how you think it will benefit you, and what you think you can contribute to the program.”

And if you’re selected? “Go into it with less expectations and with the excitement of just learning and taking it all in,” says Abobakr. “Be ready to come out of it a whole new person.”

Applications are due by the end of J-Term. From there, five candidates are asked to interview with the committee, and two will travel to Norway as next year’s peace scholars.