History of the Augustana Choir 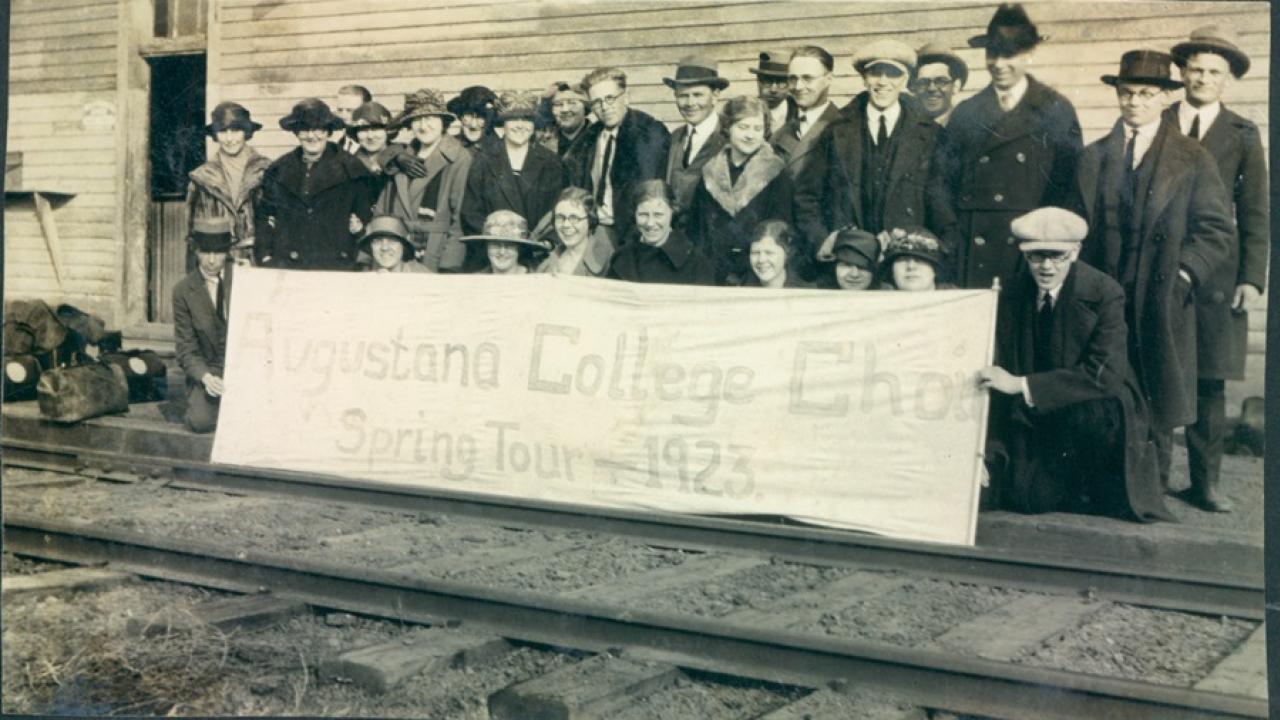 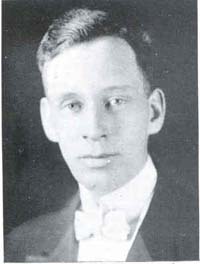 In 1921, Dr. Carl R. Youngdahl was appointed Augustana College's director of music. His task was to build a music department, develop the love of music throughout the student body, and market the college through the medium of music. Dr. Youngdahl graciously accepted the challenge. It was a formidable task since the college had been established in Sioux Falls just three years earlier and some church congregations were opposed to its location. In that same year, Youngdahl also founded the Augustana Choir. Although the college's administration had some suggestions for the choir's direction and focus — to which Dr. Youngdahl listened — in the end, he did it his own way.

"I felt that it would be far more important for us to get into the churches and the homes of the Lutheran people of our area," he said.

So, the a cappella choir was born.

"We could travel lightly and easily since we required no instrumental accompaniment," Youngdahl said. "We could appear in the smallest of our churches as well as the largest and our concert would be a sermon in song. If this were done well, with careful working out of all details, mechanical as well as interpretive, and done better than any other college in the area, and better than any church choir could do, then we would have an advertising media that would eventually win over our constituency. This we set out to do and the enthusiastic support we received testified to our success."

The first full concert was given on February 14, 1922, in Brandon, South Dakota. Six faculty members and a number of high school students were included in the choir's original cast of 33. From this humble beginning the Augustana Choir rapidly gained national and international acclaim.

Shortly before Easter in 1922, the choir set out on its first tour. Concerts were given in the South Dakota communities of Dell Rapids, Flandreau, Colman, Colton, Oldham, Madison, Volga, Sinai, Brookings, and Arlington. After Easter, the group sang in Irene, Volin, Mission Hill, Yankton, Gayville, Meckling, and Elk Point. By 1926, the choir was touring the West Coast. In the spring of 1927, it was one of two choirs invited to sing before the National Federation of Music Clubs (NFMC) at its biennial convention in Chicago, Illinois.

In 1928, the Augustana College Board purchased four trucks that had been converted into buses. All the college's groups were to use the vehicles, but the athletic and forensic squads refused to be seen in them. They became the property of the choir.

The next year, the choir was again invited to sing at the NFMC, which gathered in Boston, Massachusetts. Concerts were also given in Chicago, Cleveland, and New York. The tour was made in the four buses that reached top speeds of 20 miles per hour. After the Boston concert, a critic in Music News praised the choir as "one of the best ever developed in America." Dr. Youngdahl was referred to as a "musician and an artist of first rank."

Augustana's a cappella choir appeared before the NFMC four times. It was the only organization of its kind to be so honored.

It was also in 1929 that the choir earned the distinction of being the only college recording artists in South Dakota. While traveling to Boston, the group recorded in the Columbia studios in New York City.

On December 23, 1947, the choir was heard nationwide as it presented a 15-minute concert over the NBC Radio network through the facilities of KELO in Sioux Falls.

In 1953, under the direction of Dr. Youngdahl, the choir traveled east and was greeted in Washington, D.C., by Vice President Richard Nixon.

Dr. Youngdahl retired later in 1953. Despite all the hardships of travel, financial pressures of the Great Depression, and the pain of World War II, his choirs missed only two concerts in 32 years.

"These past years were difficult for our young school, some of them seriously critical years," Dr. Youngdahl wrote. "But God guided and helped Augustana College to weather safely all storms."

In the summer of 1960, the choir toured Norway and Germany, giving 45 concerts. The group was invited by the International League of Norsemen and the tour was part of Augustana's centennial celebration. Dr. Running was awarded the St. Olav Medal in 1962. It is issued by the King of Norway to persons who have done much to advance Norwegian culture in this country and Norway.

After a concert in Oslo, Norway, on June 14, 1966, the review stated that "Augustana College maintained clearly its reputation as the U.S.A.'s leading student choir. It was a director of outstanding personality, Arnold Running, who led these fresh, young voices in a demanding, well-rounded program, everything in a most cultivated taste."

A headline from the Hamburger Abendblatt on June 18, 1966, read: "APPLAUSE IN THE CHURCH - Splendid Concert by the American Augustana Choir." The accompanying review stated: "It was quite unusual when on Thursday evening at St. Mark's Church in Poppenbuttel, Hamburg, spontaneous, hearty applause broke loose following the concert by the Augustana Choir. The Pastor, Rev. Dr. Puschmann, showed understanding for his congregation by saying, 'One should be allowed to express what is in his heart.'"

Also in June 1966, after hearing the Augustana Choir, a German reporter wrote "Could not the opposing powers, America and the Soviet Union, best approach each other through cultural ambassadors such as these singers."

Following Running's resignation, Dr. Olaf Malmin became the choir's third conductor in 1970. During the 1970s, under the direction of Dr. Malmin, the Augustana Choir traveled extensively in the United States. In 1983, Dr. Malmin led the choir in its first appearance in Minneapolis' Orchestra Hall. In 1984, the choir was chosen to sing at the North Central Regional Conference of the American Choral Directors Association. The following year it was invited to sing at the All-American Choral Gala in New York City.

Beginning in the fall of 1992, the Augustana Choir was under the direction of Dr. James Johnson, endearingly known as "Dr. J." The Augustana Choir became one of the most internationally traveled college ensembles during Dr. Johnson’s tenure. The choir represented the United States in the international observance of the 50th anniversary of the Liberation of France at Omaha Beach in 1994 in a tour that included appearances all across England and France. They performed in Vienna, Salzburg, Innsbruck, and Graz in commemoration of the millennium of Austria's nationhood in 1996. 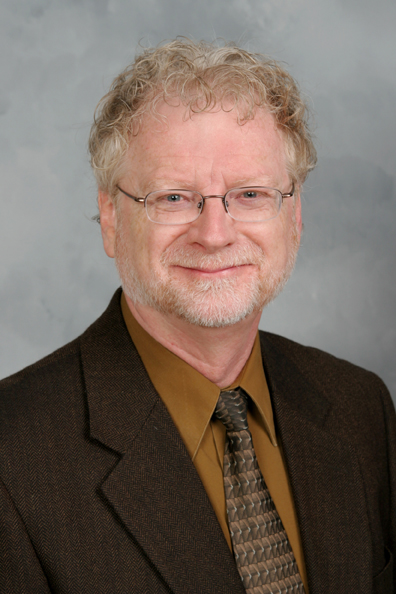 The choir toured Norway in May and June of 1998; Ireland, Wales, and England in the summer of 2000; and in 2002 performed in Italy and Germany, presenting High Mass at St. Peter’s in Vatican City, and at the Basilica of St. Francis in Assisi. In 2004 they performed throughout Ireland on a tour of peace and reconciliation between Ireland and Northern Ireland. Tanzania was the choir’s destination in 2006, performing throughout the country in a history-making tour for a choir of an ELCA college. In 2008, the choir returned to Italy with a special focus given to Sicily and the southern part of Italy.

Upon Dr. Johnson's retirement in 2011, Dr. Weston Noble (Luther College's Nordic Choir Director Emeritus) served a one-year term as guest conductor, and in the fall of 2012, Dr. Paul Nesheim began his tenure as the fifth director/conductor of the Augustana Choir. 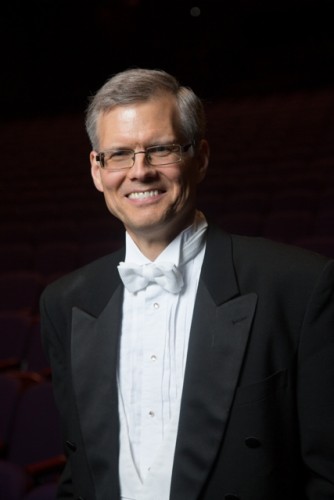 In a memorable first year as conductor, Nesheim led the choir on a 22-day tour of Europe (Germany, Austria, Poland, Czech Republic) during the January Interim of 2013, as well as the three choir and Augustana Orchestra's "Brahms Requiem" at the Washington Pavilion. The choir also participated in the very first "tour" of Augustana Vespers, in which this long-standing Christmas tradition in the Sioux Falls area performed in Rapid City, South Dakota, in 2012 and 2013. Most recently, Vespers has been "on the road" to the Minneapolis/St. Paul area, beginning in 2014. Nesheim's choir has also appeared in concert at Carnegie Hall (April 2015) and completed a Spring Break Tour in 2016 to Iowa, Missouri, Oklahoma, and several stops in Texas.  An appearance with the legendary Barry Manilow at the Denny Sanford PREMIER Center followed the 2016 tour. The choir also appeared at the Regional ACDA Convention held in Sioux Falls in February 2016, and the choir returned to Europe in January 2017 with performances in Berlin, Potsdam, Erfurt, and Wittenburg, Germany, as well as Rome and Assisi, Italy.

On April 28-30, 2022, the Augustana Choir celebrated its 100th anniversary. Many of the weekend’s events were supported by choir alumni Gretchen (Papik) ‘00 and Ryan Jepperson ‘01. The celebration included a welcome reception, presentation by Dr. Greg Handel on the history of the Augustana Department of Music, alumni choir rehearsal, choral room dedication, "A Sermon in Song" concert at the Washington Pavilion, alumni choir recording session, and swing dance extravaganza.

On June 1, 2022, Dr. Russell Svenningsen began his tenure as the sixth director/conductor of the Augustana Choir.  Dr. Svenningsen's appointment was aligned with the university's larger structural changes in governance, as well as Dr. Svenningsen's outstanding musicianship and dynamic personality. 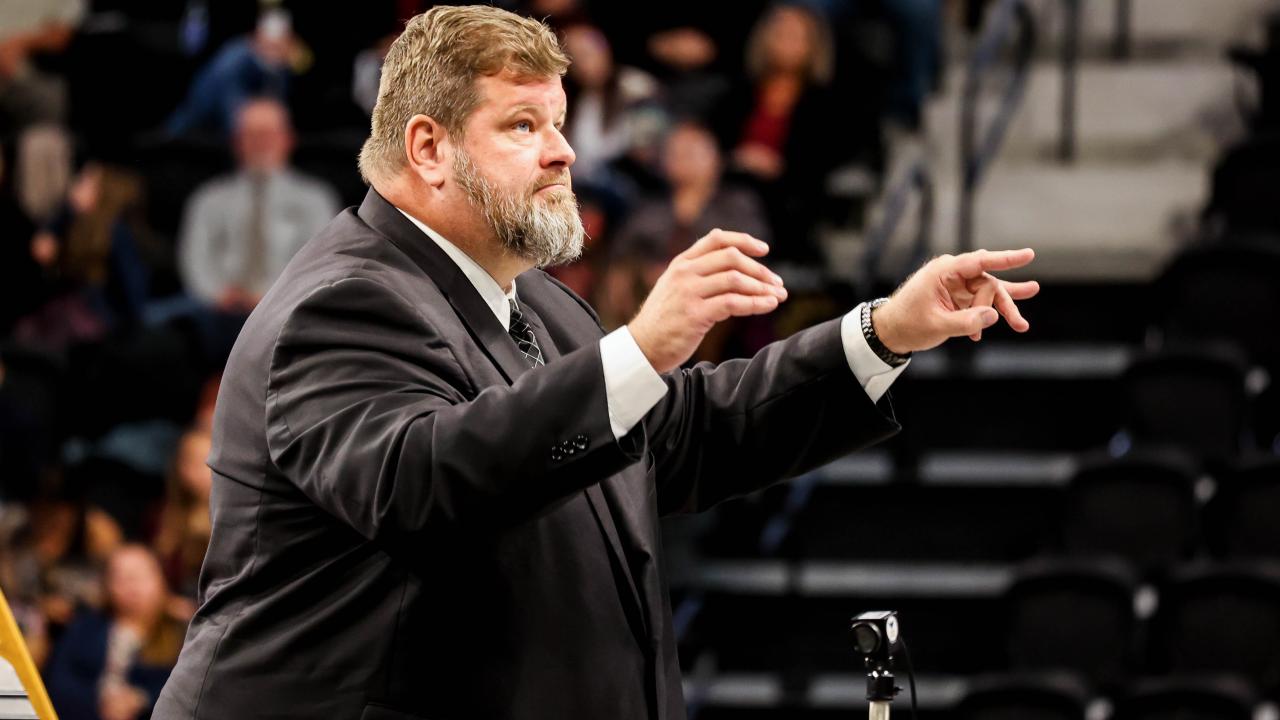